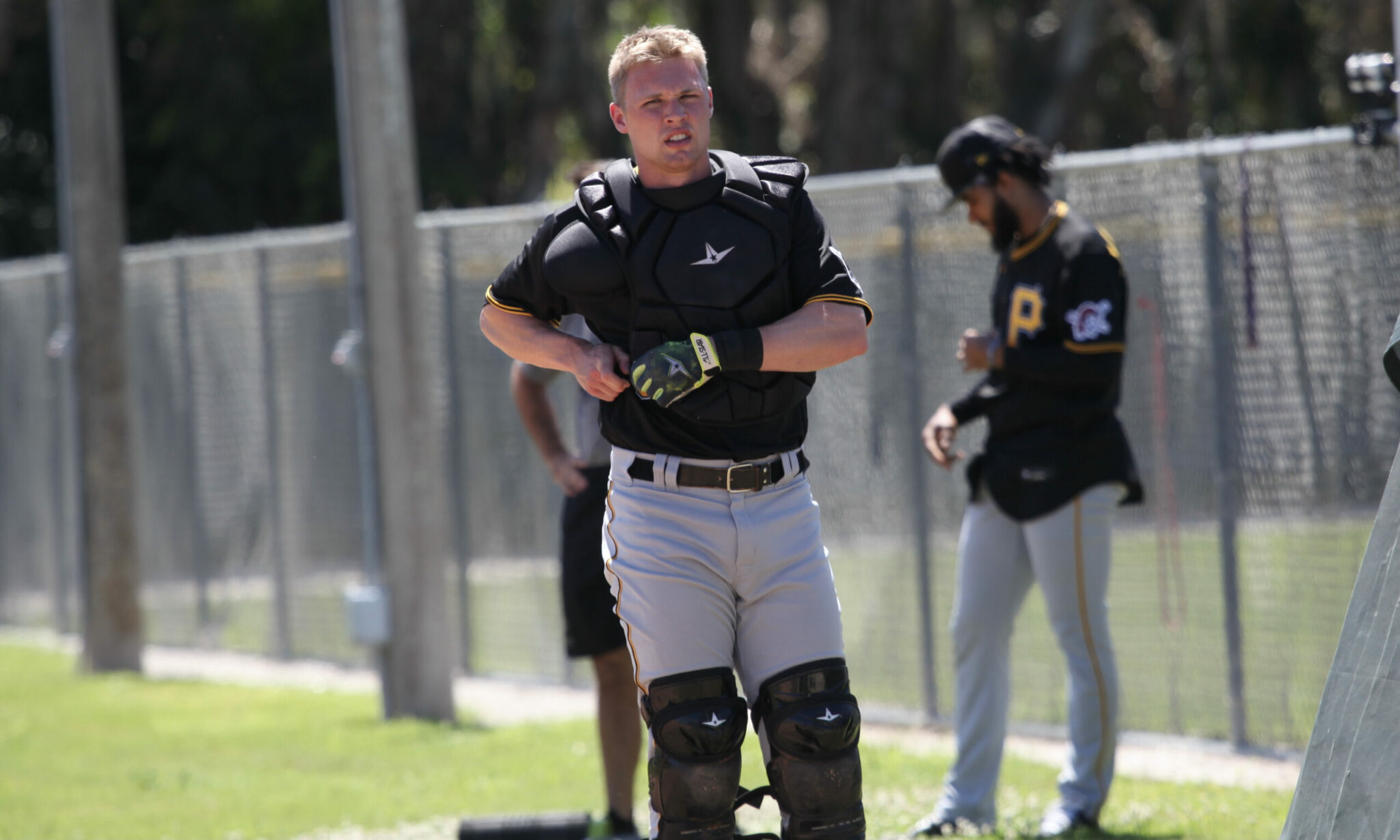 The promotion of Endy Rodriguez to Altoona was going to create a ripple effect throughout the system for the Pirates, impacting more than originally thought.

One name that likely didn’t come up when first talking about the move was Eli Wilson, one of the two remaining catchers among the four that started the year with Greensboro.

Starting the season with so many natural catchers, Wilson has spent the majority of his playing time at third base this season, but has also logged just 35 games with the Grasshoppers.

He’s struggled offensively since leaving Bradenton last year, but now with just two catchers in Greensboro, Abraham Gutierrez being the other, we may be able to let one of Wilson’s strengths showcase once again.

Wilson is one of the strongest defensive catchers in the system, but has played just eight games behind the plate this season, his opportunities coming few and far between.

In those eight games, Wilson has thrown out five of the 14 would be base stealers he has faced (35.7%). Smaller sample size, maybe, but he’s also thrown out 29.8% of potential base stealers since turning pro. Most of the damage was done back in his first taste of the minors, with 18 caught stealing with Bristol back in 2019.

Last year was his ‘worst’ year when it comes to controlling the bases, throwing out 20.3% of runners. He’s also kept the ball in front of him too, with just 14 passed balls in 824 1/3 innings.

Gutierrez will probably handle the bulk of the workload behind the plate, and this is a golden opportunity for him as well, but it also allows Wilson to get back to his natural position.

Even if he gets left behind in Greensboro again next year to take on more of an organizational role, having someone like Wilson behind the plate is going to go a long way with some of the younger arms that could be moving up from Bradenton then.

Can’t really talk about the defensive work of Wilson without recognizing what Gutierrez has done behind the plate throughout his career. It’s easy to be overlooked when you are one of four catchers on a roster, especially when one was the first overall pick last year and the other is maybe the hottest hitter in the system right now, but Gutierrez is a great at his position in his own right.

Gutierrez has thrown out 25% of would be base stealers this season, which is slightly down from his career mark of 27% (83-for-305). Not a bad defensive tandem to be running out there on a daily basis, even with the loss of Davis and Rodriguez. Not often you can say you’ve lost your top top two catching prospects and can still remain solid at the position.

The Marauders had the second player from the 2022 draft class join them on Tuesday, with fifth rounder Tres Gonzalez getting promoted from the FCL. This helps a couple of ways, both short, and long-term. His advanced bat should do well in Single-A, but also a player of his experience (played college ball in the ACC) and ability to put the bat on the ball should do wonders with some of the outfield prospects currently in Bradenton.

All have a strong tool (Sergio Campana and Jasiah Dixon have speed, Rodolfo Nolasco raw power), but have struggled to make consistent contact at times this season.

While Gonzalez’s main focus should be his own development, there may be something that the rest of the outfield can learn from a player who has been so widely praised for his bat-to-ball skills.

Yesterday: Debuts – Termarr Johnson in FCL, Endy Rodriguez for Altoona, and Others

Yesterday: Look Back At The Endy Rodriguez Five Hit Game

Have not heard any news about Davis… What´s his status? Is he rejoining Altoona soon?

Murph, silly question, but do you know how Tres pronounces his first name? Silent “s”?

Naw no silent ‘s’. From everything video I can find where someone mentions his name, it’s just the Spanish word for three pronunciation.

Gotta wonder how a player feels about his baseball future when he is constantly being ‘named’ second and even third team? I’d be thinking about moving on to something else.

Some players carve out a pretty good role in the minors as the kinda depth guy, especially when they are as good as he is defensively. Great to pair with young pitching staffs. Someone of the guys like that transition to coaching as well

someone help me out. i'm just not sure if endy…

The Pittsburgh Pirates couldn't carry Saturday's victory into Sunday and ...
99