P2Daily: The Future of the Pirates’ Outfield 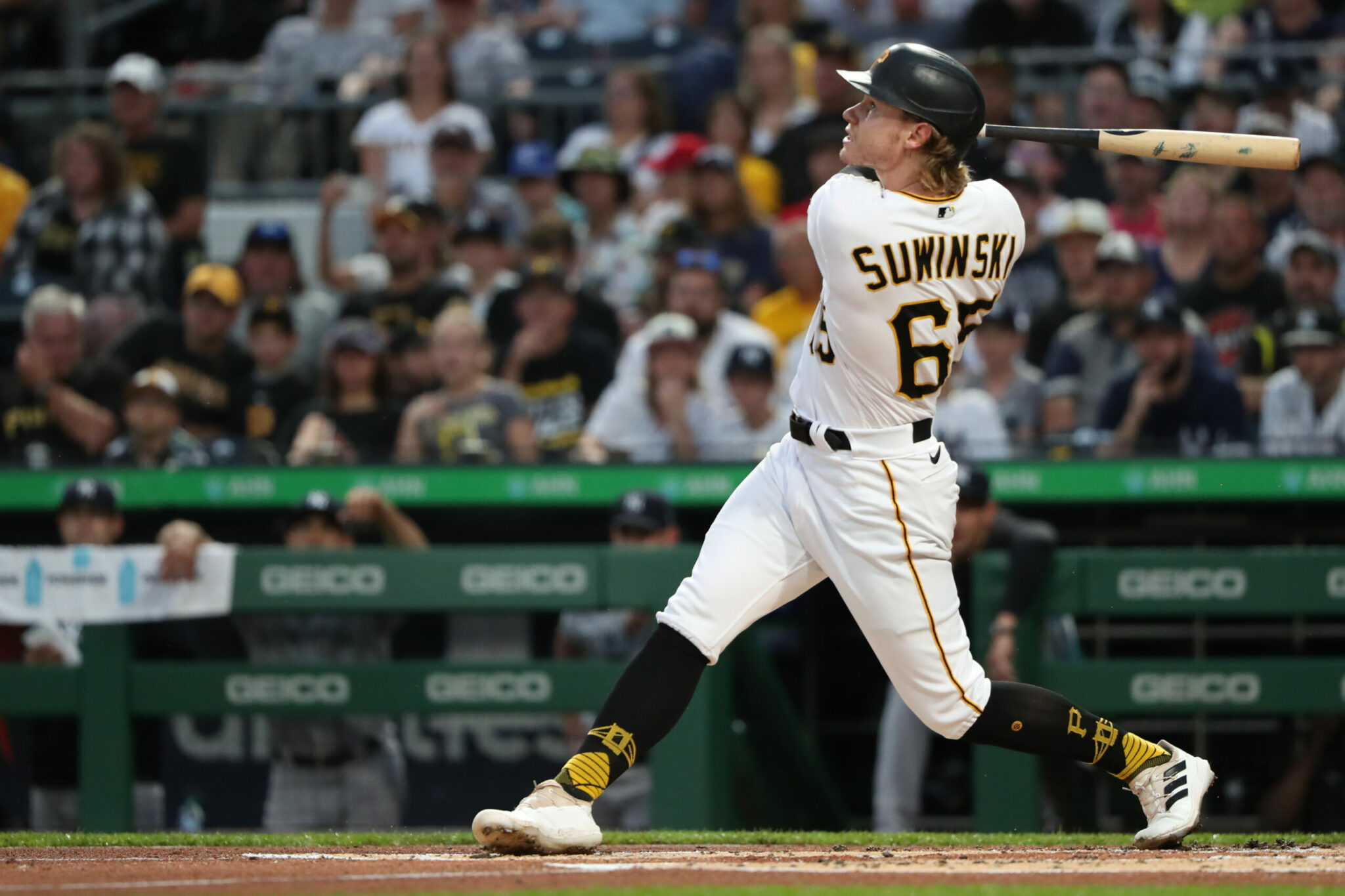 The MLB draft is this weekend, and the Pirates will have a lot of opportunities to add talent to their organization with the fourth overall pick and the fourth biggest bonus pool.

Our draft previews will go live on the site later in today’s premium article drop. We will also have reports on every pick the Pirates make from Sunday through Tuesday, and draft recaps all week next week.

Most of those picks will start off at the lowest levels, and won’t arrive for several years.

Meanwhile, at the highest level, the Pirates optioned rookie outfielder Jack Suwinski to the minors after yesterday’s game. The 23-year-old has 14 home runs, but has been struggling at making any kind of contact recently.

The Pirates will end up getting an extra year of control from Suwinski by not keeping him up the remainder of the season. You could easily argue that he has things to work on, beyond the power.

In his place, the Pirates are likely to bring up outfielder Greg Allen, who was a veteran addition with sleeper potential. The Pirates have tried this approach across the board this year. Some of those sleepers haven’t worked out, with Yoshi Tsutsugo being the biggest example. Others have put themselves in position to be trade candidates this month, including Jose Quintana.

The outfield will likely include Allen, Ben Gamel, and Jake Marisnick. Allen is the youngest of the group, at 29 years old. That trio looks bad at the moment because Bryan Reynolds is injured. It also looks bad because the Pirates have yet to see a young outfielder stick at the big league level.

I wouldn’t be surprised to see a return of Suwinski and Travis Swaggerty by the end of the season. I’d also expect Cal Mitchell to get another opportunity.

Allen did take a step up last year in limited time with the Yankees, and has years of control remaining. Despite his age, he could emerge as a future bench option, possibly replacing Gamel, who is a free agent after this season.

Once the trade deadline passes, the Pirates should focus their outfield time on the future, aiming to get players ready for the 2023 season. Because right now, there’s no starter lining up on either side of Bryan Reynolds. And the draft isn’t going to change that any time soon.

Yesterday: Bubba Chandler’s Start for Bradenton Gets Rained Out; Pirates No-Hit the Pirates

Today: The Lost Art of the Quality Start

Williams: Are the Pirates Headed in a Positive Direction?

Honestly, I don’t hate jack going down… assuming by August 3 all of the bad vets who havent been moved are cut or bench players. I think jack would do well with some time in AAA and if we can flip any of these guys at all for even a 19 year old super big project with an outside chance to help in the future, then why not.

The opposing argument I consider is the idea that our next year’s payroll will likely be dictated at least some by this year’s revenue and if we could play some inspired ball down the stretch then that might excite the fan base a bit.

Either way, I would hugely change my tune if the dead weight is still here taking away opportunity from young guys getting some experience

Reserving judgement until after the trade deadline. let’s see who is still here from that group. Trade or DFA.

Maybe it’s a good idea to keep prospects in the minors while the current manager and coaches are in Pittsburgh. Shelton and the rest of these guys have yet to show they have any idea how to teach or coach. The bizarre lineups, idiotic base running mistakes and the clueless base coaches who don’t seem to understand what the job entails along with Shelton’s apparent obsession with freely handing out alcohol in the clubhouse has to give one pause.

Playing the likes of Yoshi, Marisnick, Perez, Allen, VanMeter, and even Vogelbach makes precious little long term sense…..but, I wouldn’t expect the Pirates to do the right thing, only the dumb thing. Maybe they are delusional enough to think that the above named players can be traded for useful long term assets/prospects? I would much rather watch guys like Suwinski, Castillo, Cruz, Delay, Bae, Swaggerty, etc. play the rest of the season on an extended basis – even if they are struggle at times. Its not like they would be replacing high, or even moderately, performing major league players. So, not only does the team stink – but they are not even a young team that stinks but hopefully developing. This team’s roster is filled with veterans in the 28 to 32 range with precious little to offer the Pirates in production or in trade value. Yet again, they continue to squander prospects – Swaggerty is what 26 now? He is still a totally unproven commodity at the major league level….but, playing Marisnick instead is a genius move. Bolton is 26/27? Bae is hitting .300+ and offers speed, defense, and versatility…..but playing the likes of Newman and VanMeter is a worthwhile endeavor. This team is run by idiots and is the laughing stock of MLB.

More Nate Dogg on the SOTD. I like. Going to have to keep the streak going 😂

I picked this one a few days ago when you posted Regulate. Normally I go with whatever I was listening to on vinyl. That was Prince live yesterday.

Sounds like the right move with Suwinski. He probably out-performed initially and regression happened. Playing at Indy will help restore confidence and give him some time to polish his craft. Meanwhile, Allen is a pro who belongs in the league and gives the PIRATES a chance to better evaluate his potential role going forward.

On what basis has Allen show that he belongs in the league? All I see is a guy almost 30 years old who is essentially another of the Pirates many AAAA players….would it make more sense to play Swaggerty and Bae and see how they can perform at the major league level, instead of retreads like Allen and Marisnick??

It should be Bae getting the call, not Allen…..

It should be Bae and Allen with Marisnick or VanMeter released.

As for Marisnick, I don’t disagree with giving veterans a longer leash but we’ve seen others (e.g., Castro) demoted for baserunning blunders less obvious than Marisnick’s. And speaking of Castro, he’s hitting well again and I hope we see him soon. I’ll modify the above–by August it should be Bae, Castro, and Allen up with Marisnick and VanMeter out. (I actually like VanMeter, but he hasn’t shown anything that justifies keeping him over giving opportunities to guys playing well in AAA.)

Sorry, but nobody’s base running errors were more obvious than Castro’s. Lol! Oh, and he has a nasty habit of standing at home plate watching flyballs like he’s Babe Ruth.

We’ll just disagree on this one. I’ll take Castro’s overall approach to the game even if it comes with some plays that make you want to bang your head.

Could be in good hands or maybe a total bust…The prospects that have come up have shown that they need to not only adjust their swings but also their approach. Unfortunately, that takes time so do not expect much in the very near future just hope that by say mid-year 2023 we are seeing some progress.

A lot of young players need to go back down after their first cuppa coffee in the MLB. I would expect Mitchell and Madris both back up in August. And they gave Jack more rope then normal thanks to Covid in the spring and early summer power. I feel confident at least one good starter will come out of that trio. Swags will also be back soon. No panic here.

I believe your’s is the only mention of Madris anywhere here, an OFer I’d like to see more of, likely in September. Cal, not so much, don’t see him as part of the future.

I thought Bligh played well while he was up and I understand what the Pirates are doing but they just don’t seem to be very good at what they’re doing.

“The Pirates will end up getting an extra year of control from Suwinski by not keeping him up the remainder of the season.”

I think they already had the extra year of control since Jack didn’t come up until the end of April, but by sending him down they’ll likely avoid him qualifying for Super Two. I could be wrong about this because with the delayed start to the season, he was very close to the cut-off.

If they do gain an extra year, it’s the right move. If not, then it may still be the right move though I’d have left him up through the Colorado series where he’d have a much better chance of getting the bat going than he did against the pitching in Milwaukee and Miami.

He missed by one day . Players who get optioned need to be in the minors for 20 days to lose a service year and he was down 19. He’s also in an 0-for-28 slump, with a.199 average and a 30.5% strikeout rate, so it’s his time to go. I think some people forget that he never played AAA, so this isn’t a bad thing getting him regular at-bats

As a quick follow-up, isn’t the actual criteria based on days in the majors instead of days in the minors? Normally it would be an easy conversion but I’m wondering if/how that changed with the delayed start to the major league season.

Thanks. That one day is huge. I still think he could have got going again at the MLB level and they may have too. Nobody can really argue with his recent stats that he doesn’t need to be sent down now, and giving him the Colorado series might have taken away their opportunity to gain that extra year if he ended up having a good series.

But, we have LOTS of infielders that can play the OF, right? It’s pretty telling that none of our OFers at Altoona or Indy are highly rated prospects. Not one impact bat in the bunch!