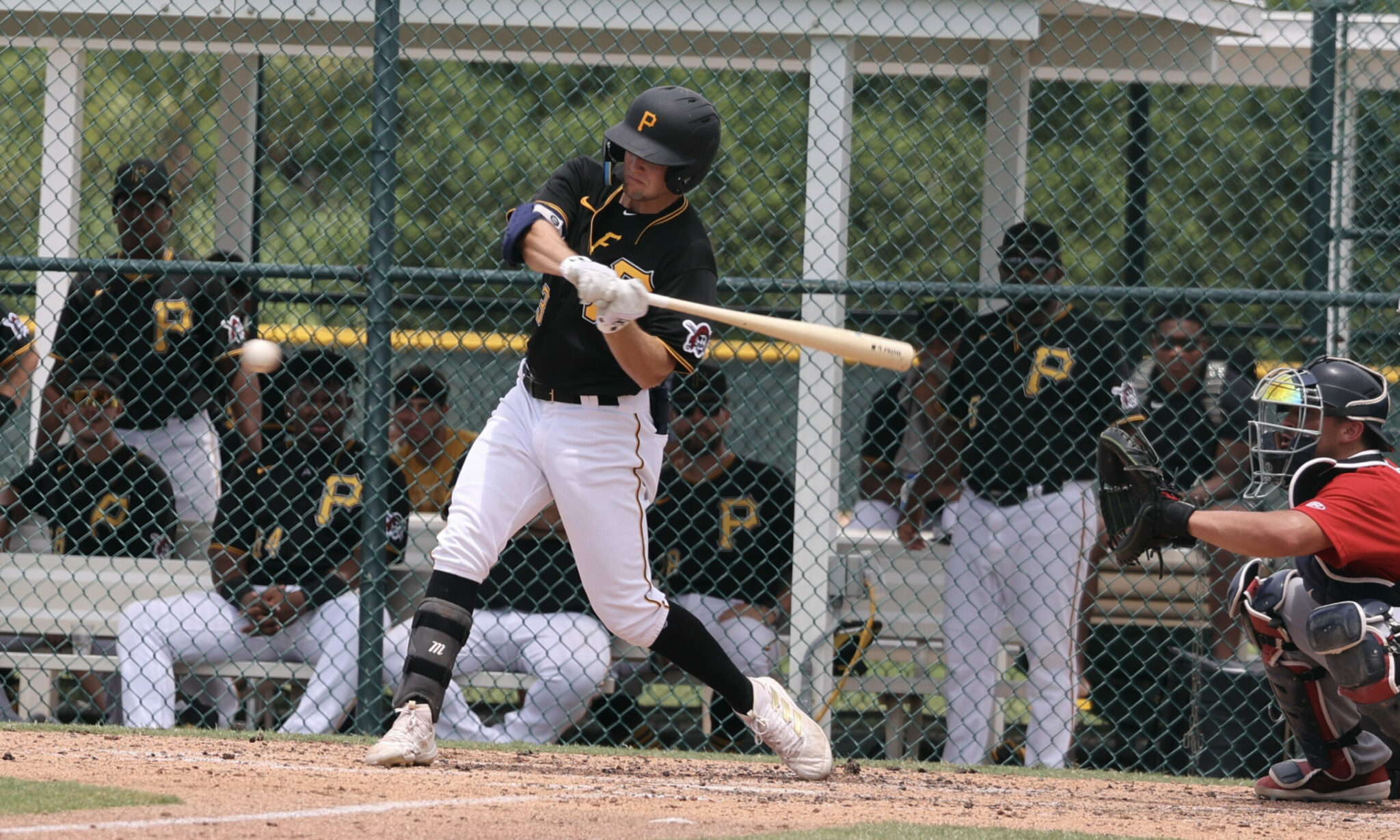 The Pittsburgh Pirates didn’t use many of their draft picks on position players, but they did snag a pair of outfielders along the way. Less than a month after the draft, both are in Single-A playing for the Bradenton Marauders.

With seven wins in their last 10 games, the Marauders find themselves in first place in the Florida State League, west division in the second half of the season.

While the Marauder rotation has some very promising young arms, the team’s strength down the strength could come from the outfield, as they got additional boosts in Deion Walker and Tanner Tredaway on Friday. This isn’t even counting Rodolfo Nolasco, who has been on the injured list since August 5.

Tres Gonzalez picked up his first hit with Bradenton on Friday, driving in a run. While his overall numbers still don’t look great, Sergio Campana has picked up seven hits in his last five games, including a pair of doubles on Friday. He’s been solid when he’s made contact, and has some of the best speed in the system, but is still striking out too much.

It will be interesting to see how the outfield rotation shakes out, but a potential outfield of Campana-Walker-Jasiah Dixon may be one of the fastest in the minors, and shouldn’t see too many baseballs find the grass in the outfield.

Peguero Warming Back Up

When the season started, there were few hitters that got off to a better start than Liover Peguero. He even got a quick cup of coffee with the major league team, picking up a hit as well. He’s struggled a bit since coming back down to Altoona, but recently picked up his 100th hit of the season on Friday.

Though he did extend his hitting streak, only getting a double snapped a four game streak where Peguero had picked up multiple hits.

In Friday’s game, Peguero also passed the amount of at-bats he recorded in 2021 (374 in Greensboro, 376 now with Altoona), and looking at the numbers there’s plenty there to say he’s still making the proper steps forward.

Peguero has 17 fewer strikeouts in a nearly identical number of at-bats from a year ago, and is hitting a lot less ground balls in Altoona. The hit totals are nearly identical, but in favor for his time in Greensboro, which probably shouldn’t be too surprising, and encouraging that he’s nearly kept pace with what he did last year in about the same amount of at-bats.

I talked about the Greensboro catchers getting the opportunity to step up and flex their defensive abilities after Endy Rodriguez was promoted. Abrahan Gutierrez has taken it a step further.

In three games this week since Rodriguez has moved on to Altoona, Gutierrez is 4-for-13 with a home run and two doubles, driving in three total runs in the process. Jersey Shore also hasn’t stolen a base yet this week, despite being tied for fourth in the South Atlantic League in the category.

Wow the low A area gets a bump when recent draftees sign…news at 11.

Peguero only hits when his partner in crime, Nick Gonzales plays! Was proven over and over last year and again this year……

Reading last night’s Pirates box score they had 3 position players who were drafted by the Pirates out of eleven players who took the field. The Pirates have been drafting players with high choices forever and yet most of the players come from trades or free agent signings. I read daily about all the promising players in the system but even drafting mostly in enviable positions there is not one star player on the Pirates roster that was drafted. The drafted players in last night’s lineup are basically bench players. I don’t care under whose regime the draft was held but anybody who has attained the position of GM should be able occasionally while drafting around the top ten pick one outstanding player.

This ignores your point that we’ve been drafting high, but most of those high picks are too recent to judge (in ’14-’16 of course, we drafted near the end of rounds and in ’19, the middle of rounds). One conclusion, though, is that good teams often need to be build through smart trades and/or FA signings. There’s just too much uncertainty around draft picks and IFAs, so acquiring the right guys once you’ve had a chance to evaluate them at the professional level becomes essential.

There are teams that are thriving with largely homegrown talent (the Braves and Jays come to mind but even in those cases they wouldn’t be where they are without guys they brought in through trades and FA signings), but the Brewers, Dodgers, and Rays are among the most well-run teams and that they needed to increase their talent level through trades and FAs shows how hard it is to build a core only from the draft and IFA signings.

Your last sentence is an insane self own. Teams should NOT eliminate an outlet to acquire talent like Pgh has.

Then what is the sense of reading PP every day following all the teams and players in the farm system if they are going to just fill the team with free agents and trades. The team had a few good years, and the Pirates were drafting near the bottom of the draft but that was about 6 years ago. Big market teams usually draft near the bottom because they win and they can afford to wheel and deal with their money, they pay players 10 to 20 m while the Bucs pay 2 to 4m.
I’m not saying that they need to fill the team with only drafted players. What I’m saying is that for all the hoopla about the minor leagues every day there needs to be more home- grown talent who are stars not just fringe types.

I agree that there needs to be more homegrown talent and most importantly, that’s where much of the core needs to come from.

I was curious to see how much home grown talent there was on our last good teams. In 2013, for example, we only had 4 of 8 starting position players that we had drafted or signed as IFAs but they were our core of Alvarez, Marte, McCutchen, and Walker. By 2015, though, 7 of our 8 position players were guys we drafted or signed as IFAs–pretty impressive.

OTOH, the pitching during those years required lots of acquisitions from trades and FA (Burnett, Liriano, Morton, Locke, W. Rodriguez, Grilli, Melancon, …). So it takes some of both.

Good stuff as always, AM.