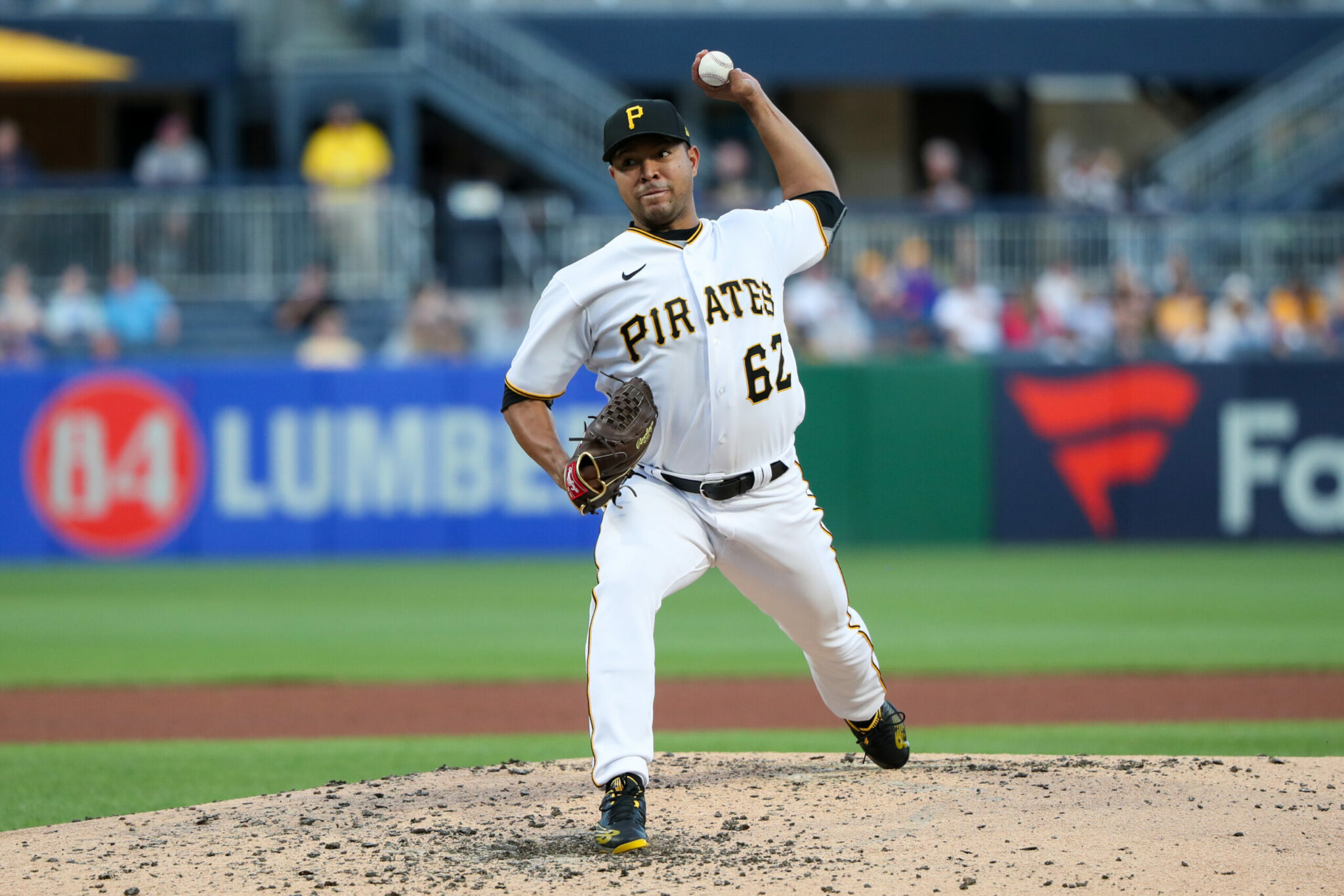 The MLB trade deadline is this coming Tuesday, August 2nd. The Pittsburgh Pirates have already made one move, sending Daniel Vogelbach to the Mets for Colin Holderman.

The Pirates don’t have a lot of trade pieces this year, which is to be expected from a young, rebuilding team that is currently one of the worst in the majors. They have a few guys who will almost certainly be on the move, and two standouts who could provide a big boost to their farm system if either is dealt.

Here are my thoughts on five players who will probably be discussed in trade talks over the next five days.

I don’t think Reynolds has his highest value right now. He has a .789 OPS this year, down from his MVP-contending numbers last year. He’s dealt with injuries, and is returning from an oblique injury. The Pirates have him under team control for three more seasons, and his contract is locked down next year. They might be better off letting him build value the rest of the year and trying to deal him in the offseason. This is said to be a seller’s deadline, with so many teams in the race due to the extra playoff spots.

As of this writing, the Pirates are one of only eight teams in the majors who are double-digit games back from both their division and the Wild Card races. Reynolds would draw attention for what he’s done in the past, but it’s questionable whether his value would be down due to his season, or up due to the market.

The most surprising move I could see the Pirates making would be a trade of David Bednar. The All-Star reliever has four more years of control remaining, so there’s no rush to deal him. If the Pirates get aggressive this offseason, and try to start contending in 2023, Bednar will be a key part of that contending team. He would also land a huge return right now in a seller’s market where he has proven success and years of control. Such a return might do more for the Pirates’s chances of contending long-term than Bednar could do for them in the short-term.

Quintana makes the start tonight for the Pirates, though last year they traded left-hander Tyler Anderson ahead of what would be his final start. If Quintana does start today, and has another strong outing, it would give the Pirates leverage heading into the deadline. I don’t think Quintana will land much more than what Anderson got last year — an upper level potential 40-grade player and a rookie-level flier. There’s a chance the return could be higher, due to the seller’s market. I think Quintana will be traded, and will bring back the biggest return for the Pirates outside of a Bednar or Reynolds deal.

The Pirates already traded Daniel Vogelbach, getting back Colin Holderman, a right-handed reliever who has had some success in the big leagues this year. Holderman was sent to the minors immediately, though I’d expect him to return after the deadline. I would expect a bullpen spot to open, and Chris Stratton seems the most likely to be on the move. Stratton has one more year of team control, and has been a reliable reliever who can eat innings. I could see Holderman working to replace him after Stratton has moved, and I think Stratton gets moved.

Gamel is a free agent at the end of the year, and probably wouldn’t land much of a return. There might be an argument that he has more value remaining on the team as a veteran presence for all of the young outfielders the Pirates have. Of course, if the Pirates kept Bryan Reynolds, they wouldn’t need this as much. The Pirates could try the same thing they did with Vogelbach, going for a cheaper reliever with years of control for a position player who can help a contender. Any lower level prospect they added would just get lost in a growing sea of depth.

Quintana had two fine final outings and helped himself and the Bucs. Ben needs to get quality not quantity for him. The plan has worked for the player and the team….now the GM and his staff have to deliver.

They aren’t trading Reynolds nor Bednar.. Too many years remaining. Quintana is gone but that was his purpose on the team. I think the plan was to sell up until this year and now they will start adding as soon as this offseason to mix with the young bucks

It wouldn’t surprise me if Bednar gets dealt. His past month has been pretty rocky. Is that from being over used or has the league caught up with him? Teams overpay in trades to get established closers so this is a good time to sell. Reynolds i don’t see being moved because his value is low at the moment. Wait til next year or the off season if he finishes strong. Personally I’d like to keep him but we know how this organization works. They will dump him and we will spend the next 4 years trying to replace his production.

This is boring so let’s jump out of the box or maybe out of the container holding the box and try this trade. Bednar (or whomever) to Tampa for Cash. No not that kind of cash, Kevin Cash their manager. A motivator, leader, organizer who gets the best out of his players, all things sorely missing in Pittsburgh.

It’s been done before and in my view the Pirates need one of those more than pretty much anything else. That’s how the Pirates got Chuck Tanner in 1976 and that worked out pretty well. Tampa would never do that? Maybe but you never know. They still owe us after all for that still unmentionable trade.

Tanner also came to a team that was very good and talented. Not even comparable situations.

Cash would not win either unless they got him enough players.

Trade deadline **sigh** It seems like only an unachievable dream to be on the other side analyzing which deadline players might help the Pirates get deeper into the playoffs. I’m more and more thinking that only with big signings (which current ownership loathes) will the Bucs be competitive. Returns for this lousy bunch of veterans won’t be high. Dump a bunch of them for a load of dirt!

I even wonder if any big name free agents would want to come play for the Pirates.

No big name free agent in his prime would come here for 2 reasons. 1. Nutting is not going to pay up. 2. If by some miracle they would pay up, the next year they would reverse course and salary dump guys. The only big name guys we can get are the ones that are already washed up or are clearly falling off the cliff.

Would be happy to have stratton moved even at relatively low value, Q and gamel should both go to contenders as well. I see the argument for both sides related to bednar, but the idea of watching him close out postseason baseball is a bit too much for me to want to pass up on, plus assuming he stays relatively healthy, he will be valuable every offseason and deadline

Just my opinion, trade Bednar now while he has some value. I think the Pirates are at least another 2 years from contending so they really don’t need him now.

Yeah I get Hanny vibes from him. Good for a short spell, but the bad body/high effort makes sure that time is short. I’d definitely pitch him to the Yanks for Peraza and Waldichuk.

I expected to see Kevin Newman among these names. You don’t believe there is a market for Newman or is it they wouldn’t look to move him?

It’s interesting neither Newman or VanMeter were mentioned though there are reasons for that, lol.

in my mind Van Meter and Newman are not comparable. Newman has been hitting and offers quality defense. Would be a nice utility option for a contending team. Van Meter can’t hit and offers subpar defense.

I’m not to enthused with the idea of trading Bednar. I wanna see a sea of black going absolutely insane, listening to Renegade as he comes on to clinch a playoff series. A fools dream maybe, but my dream nonetheless

Hard to justify having a top closer on a team who only wins 40% of their games. Plus, his last few outings have scared me into thinking that maybe we should sell high. I think Will Crowe could do just as well. Of course, it depends on the return, too.

I’m with you on this one. He’s not just blowing the fastball past people anymore. If we get a good return, maybe time to sell high on him.

Understandable, I guess I’d have to be blown away but I still don’t like the idea of trading him

I agree, if the Bucs are offered a quality return, consider it. I would not,give him away..