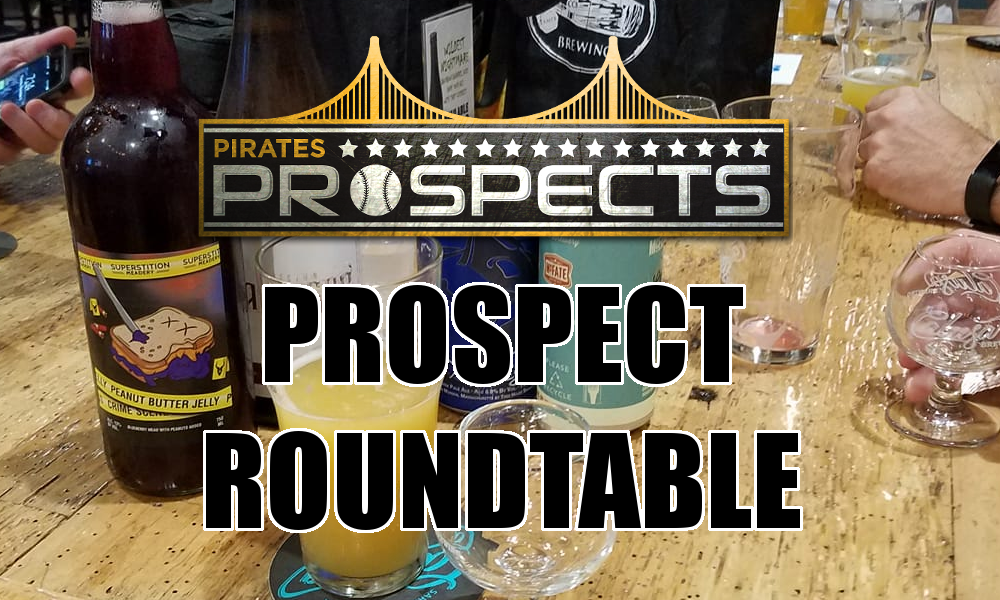 The Pittsburgh Pirates drafted Termarr Johnson with the fourth overall pick in this year’s MLB draft.

Where does he rank? That was the question for this week’s Prospect Roundtable.

When he was drafted by the Pirates, I put a little thought into ranking Johnson in the system, but didn’t really sit down and try to decide where he fits. Just figuring out the guys currently in the system are tough. I had Henry Davis, Liover Peguero and Oneil Cruz in the 1-2-3 spots, but in all honesty, they are more like 1A-1B-1C, because 1-2-3 sounds like I’m locked in on those spots. Davis was my #1, but his injury problems are not giving me that #1 confidence, especially when it appears that he’s going to be prone to injuries with the amount of times he’s getting hit at the plate, as if the normal wear and tear of a catcher isn’t enough. Then you have Peguero, who has a great approach at the plate and youth on his side, as well as the tools to be a great all-around player. He has really cooled off, to the point that he’s not really standing out like he was early in the year. Then Cruz shows everything to be the easy #1 (he’s going to graduate soon anyway), but he also has major flaws and is prone to slumps both on offense and defense.

Somewhere in that trio of #1 guys, the question becomes, is there someone who I would trade right now for Johnson? I don’t think so, but he’s not far off of that spot. If speed and defense were a bigger part of his game, then I’d reconsider. My next two in the top rankings are Mike Burrows and Quinn Priester, and I’m basically waiting all of the remaining part of the season to decide who I like better of those two players. Right now though, with the bat upside of Johnson, I feel like he slides right between these two groups of players. The question marks I have right now with both Burrows and Priester are just enough that the new guy fits in the #4 spot for me, which is soon to be #3 when Cruz graduates. I think there is potential for Johnson to actually reach #1 in the postseason rankings, but I won’t commit to that yet. In the end, I think all six of the players I mentioned here are top 100 prospects right now.

I’m going to put Johnson second behind Oneil Cruz. That obviously means he’s going to be first once Cruz loses rookie status, which will happen any moment now. For the time being, I see no reason not to take the extremely high estimations of Johnson’s hitting ability at face value. They’re coming from some of the best prospect observers out there, not that that’s a guarantee. The power seems to be real, too – the he’s-too-short notion doesn’t carry much weight any more. One thing the Pirates could really use among their top prospects is somebody with a premium carrying tool that isn’t going to falter, and hopefully it’ll turn out that way with Johnson. With Roansy Contreras graduated, the only real competition he has is Henry Davis. The biggest issue with Davis is that, after a year now, he’s hardly played, so we’re still relying heavily on the scouting reports from last year’s draft. Those reports weren’t quite as glowing with his bat as they are with Johnson’s. So for now, it’s Johnson.

There’s a very good case to be made that the moment Termarr Johnson signs he becomes the Pirates best prospect in the system. This is assuming that by time that happens Oneil Cruz has graduated.

I almost wanted to penalize Johnson due to his potential limitations for what position he plays, but then again there are questions surrounding Henry Davis and him playing catcher as well.

Johnson provides one of the best hitting tools not only in the Pirates system, but potentially in all minor league baseball.

That alone I think makes him the top prospect in the entire system. I think there’s enough power there, that despite his size, he isn’t a contact-only prospect. How much of that comes true will probably decide how long he’s at the top of the list.

For now, my initial placement of Johnson would be as the top prospect in the system.

I don’t have an updated list at the moment, but this seems pretty simple: Who would you rank ahead of Johnson? The inclination would be to include Henry Davis in the discussion, due to both players being first rounders. I think that Davis is less likely to play a premium position in the majors than Johnson, which lowers him behind Johnson for me. I wouldn’t put any of the pitchers ahead of Johnson, even though I think both Mike Burrows and Quinn Priester can be top five prospects in this system. Right now, the obvious choice to go ahead of Johnson would be Oneil Cruz, although Cruz is about to lose prospect status. I’d have Liover Peguero in the conversation, based on upside, and with the disclaimer that he doesn’t have the stats to make you feel comfortable projecting him first overall.

Johnson might be the top prospect in the system after Cruz. My hesitation there is that we’re evaluating Johnson based on pre-draft reports and complete projections of his tools. We’ve seen the shine wear off the last two first rounders — not to the point where they won’t make the majors, but to the point where we should be scaling down the post-draft expectations. I think you could put Johnson in the same tier as Davis and Peguero, just behind Cruz. I’d have Johnson leading that tier.

The only player in the system who might challenge Johnson for me would be Bubba Chandler. I love how quickly Chandler has developed both sides of his game. His odds of making the majors are higher, because he’s a legit prospect on both sides of the ball. He’s more a pitching prospect, which comes with the risk that led me to eliminate Priester and Burrows from this conversation. He can also hit, which might give him enough of a boost to be mentioned with the rest of those guys above. Perhaps if Chandler adds shortstop in the future to his growing list of baseball abilities, I’d put him ahead of Johnson.

I think Endy needs to be in the conversation for top 5 and therefore in the conversation of where Johnson ranks. I loved the pick of Johnson but if Johnson had been selected by another team, I’d have to think twice about trading Endy straight up for him. That’s not consistent with how national evaluators have Johnson ranked, but it seems like Endy checks off every box to be a top 50 prospect.

Let RJ do something in professional baseball before he is made number one.

What’s the current estimate of when the 2022 Prospect Guide book will be available ?

The whole system needs to be re-evaluated, It doesn’t seem like anybody is doing much. You would think that out of all the prospects they have in a system that is supposedly ranked in the top five somebody would stand out. All I see is failure to live up to the hype. Cruz, Davis, Gonzalez and now they just spent seven million on a guy that wouldn’t be allowed on some rides at Disney World.

These rankings always struggle with what to do with guys whose uncertainty level is so high. But that $7 million should tell us enough.

is Termarr better than Marcelo Mayer ?

because I heard people say Marcelo is. better than Tank

Last edited 11 days ago by b mcferren
0

man, how fast Gonzales has fallen, not a single mention of a guy drafted seventh overall two years ago

The only problem I have with ranking a guy #1 who we just drafted is that they’ve never played pro ball. Nicky the K supposedly had the best bat to ball skills when he came out. Anyone remember Dustin Ackley (among others) who were oozing with bat to ball skills? Henry Davis had a great college bat and now we’re downgrading him because he can’t stay on the field. Will that happen to Termarr?

The great post-covid prospect inflation period of 2020-present has taught me that we’ve gotten over our skis on ranking dudes so far away from the show. A case where conventional wisdom is proving to be pretty darn valuable.

As a compliment to the system, there are already prospects of similar talent to what Termarr projects but have actually faced the early stages of the pro ball test. Termarr, who I absolutely love, needs to earn the spot for me.

Since Cruz is about to lose his prospect status, I would rank Johnson 1st followed by Priester at 2, Burrows 3, Chandler 4 and Davis 5

an easy number one for me. very excited to see how his ‘hit tool’ translates!

Nah not a guy who hasn’t played yet. It’s shiny new you syndrome, and I love new toys!

i could see the argument for davis…but anyone else? nah. their ceilings aren’t as high as johnson imo

yeah at this point i don’t really consider cruz a prospect anymore. he’ll be in the mlb for good