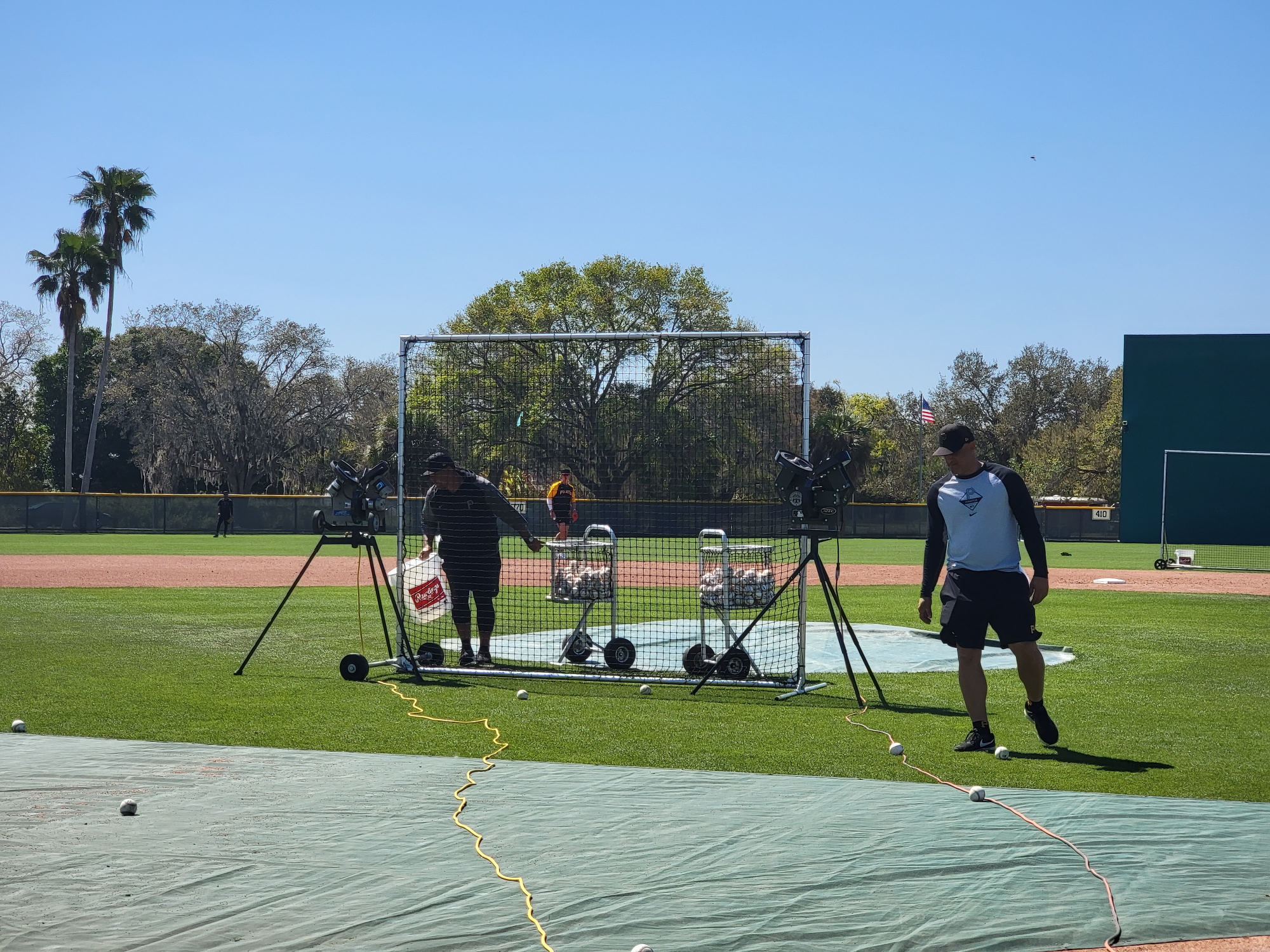 Prior to the last two weeks, I haven’t covered Pirates minor league Spring Training since 2019. The pandemic played a big role in that, but it also felt different being back, due to all of the changes made with the Pirates new player development system.

Some things are still the same. Before I left an empty Pirate City field yesterday, I spent some time walking around and thinking about covering Spring Training from these fields for parts of ten years, prior to this one. I remember watching Josh Bell hit a monster home run onto the golf course beyond field two in one of his first batting practices as a pro hitter. I remembered tons of matchups of Pirates Top Pitching Prospect versus Pirates Top Hitting Prospect. I remembered how every video taken of field 4, the turf field, looks like it was shot on Mars.

Some things are always the same. The best part about this job is watching tomorrow’s MLB players develop from the very start of their journey. One day I might remember the first time watching Lonnie White Jr. or Braylon Bishop, or the battle between Austin Roberts and Henry Davis/Matt Fraizer. I posted a lot of videos on Twitter today, except for that last one, which will be posted later this week.

There have been differences from the new player development system. One difference has been the use of multiple pitching machines during batting practice. The approach allows for a mix of delivery angles, along with a mix of fastballs and slower spin. I wrote about this last week, and got some videos of this practice in action.

The interesting thing that I spotted yesterday is that this isn’t universal for all batting practices. The Pirates, on Wednesday, didn’t have every batting practice station set up for this, but did have one station with four interesting prospects selected for this drill. Those prospects were Braylon Bishop, Will Matthiessen, Jasiah Dixon, and Lonnie White Jr. In each case, you can see why this drill — which focuses on pitch recognition and timing off the fastball while being able to adjust to the breaking stuff — might be a good choice for these players.

First, #Pirates 2021 14th round outfielder Braylon Bishop, who received an over-slot deal to sign out of high school and pass up going to Arkansas. pic.twitter.com/q6KkJkLihF

First up, Braylon Bishop has a crazy swing. Cody Potanko wrote about Bishop a few months ago, breaking down that violent swing action. This swing could lead to some power numbers, but could also be susceptible to more experienced pitchers fooling Bishop with offspeed stuff if he gets too aggressive. His swing looks like it could destroy some fastballs, with an extremely quick bat and a swing loop that seems a bit reminiscent of Ken Griffey Jr. If he can time up on the fastball, while being able to adjust for offspeed, he can be a dangerous hitter. The limited experience he has in pro ball led to a .442 OPS in 26 at-bats, with eight strikeouts. It’s safe to say he’s a bit raw right now.

Will Matthiessen is 6'7" and hit 15 home runs in 316 at-bats with High-A Greensboro last year. He was getting work at first base and right field. pic.twitter.com/egVLXs1T4x

Next up is Will Matthiessen, who had a strong second half with Greensboro, leading to 15 homers and a .784 OPS on the season. Matthiessen is huge, at 6′ 7″, but has a long, slower swing that could become an issue against a better mix of pitches. He struck out 34.5% of the time in 2021 in High-A Greensboro, showing some three-true-outcomes tendencies. He can make some adjustments to offspeed from his big frame, such as the adjustment he made in the fifth pitch in the video above. He’s a bat-first player, so limiting the strikeouts and the impact of offspeed will be crucial for his upper-level development.

Jasiah Dixon is one of the fastest players in the #Pirates system, with 17 steals in 19 attempts last year. He strikes out a third of the time, and was having issues with the velocity machine this day. pic.twitter.com/kpTtfmOfpC

Jasiah Dixon had some issues with the fastball machine. He was one of the fastest players in the system, and has added some muscle since being drafted in the 23rd round 2019. He showed some speed between A-ball and the FCL with 17 steals in 19 attempts last year. He had some serious contact issues, and that shows in the above drill. That’s the point of these drills. Dixon doesn’t really benefit from a coach flipping him batting practice fastballs down the middle. He benefits from a ridiculously fast pitching machine that’s alternating angles from a slower spin machine, giving him more practice that matches the games where he’s also been struggling to make contact with the ball.

Last of this group is Lonnie White Jr., who was set to be a two-sport athlete with Penn State before the #Pirates signed the 2021 2nd rounder for $1.5 million. White hit two homers in 31 AB in his pro debut in the FCL. pic.twitter.com/ueZ3cnyVUC

Finally, there’s Lonnie White Jr., who the Pirates signed for $1.5 million as a second round prep outfielder in their impressive 2021 draft class. White Jr. showed off some early power in his pro debut, hitting two doubles and two homers in 31 at-bats in the FCL. He did have some swing and miss issues, with a 42.4% strikeout rate. He’s got a smooth swing, and some raw power, but should be a project in his early pro career, much like Bishop.