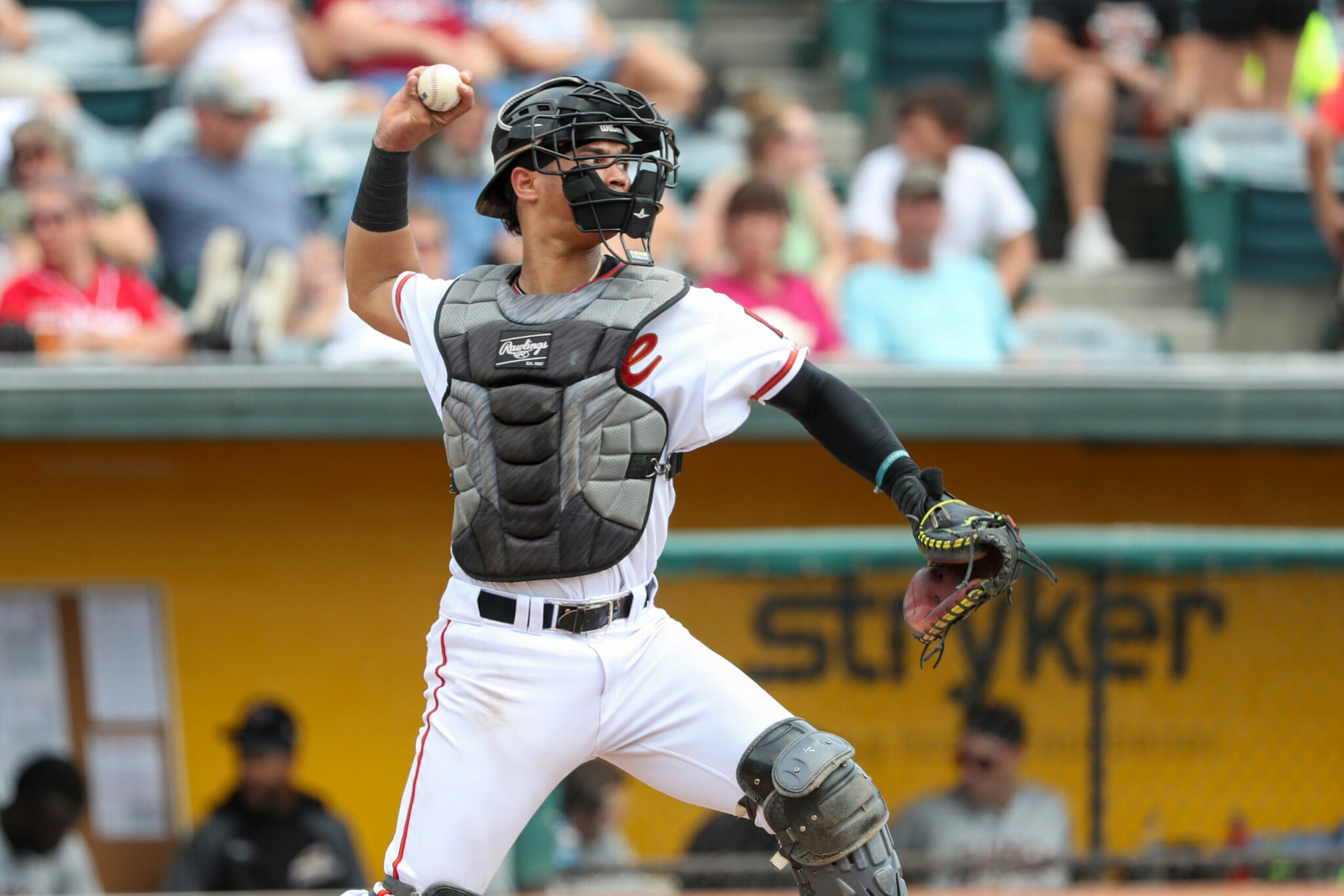 Endy Rodriguez picked up a single and two walks last night, improving his Altoona stat line to a .356/.442/.678 line. He has also shown off stellar defense behind the plate, with a 45% caught stealing rate. Below is his latest perfect throw.

If you watch that video closely, Rodriguez takes action the moment the pitch is thrown. He shifts his position as the ball is released, waiting to catch it, but also getting ready to throw down to second. He receives the ball while starting to jump out of the crouching position. The ball was in and out of his glove, and thrown down to second, almost as quickly as if the batter laid his bat out there to line the pitch. The throw is on point to the second base side of the bag, just getting the runner.

Endy Rodriguez is making a lot of headlines for his offense. His defensive skills seem almost like instinct at this point.

Sabol hit his 18th homer of the season, and fourth with Indianapolis, to lead off the bottom of the ninth.

Connor Scott hasn’t shown a lot of power this year. The outfielder last homered on August 10th, before connecting for two last night. Below is a video of the second homer, which set a franchise record for the Altoona Curve.

Franchise history for the @AltoonaCurve!

Connor Scott's 2nd dinger of the night is the team's 142nd of the year, a single-season record. pic.twitter.com/7I3rmNMSyD

I’m going to let John Dreker sum up the recent outing from Shortridge.

Altoona's Aaron Shortridge deserves some praise. He had Tommy John surgery after the lost 2020 season. Returns in June this year to pitch for the first time in three years. He threw seven shutout innings tonight. One earned run in his last four starts #Pirates

Here was Shortridge getting a called third strike in his start last night.

On the scale from ‘replacement level’ to ‘Adley Rutschman’, where does Endy rate?

Pfft, why do you hate Endy?

Anyone know how endy’s other catching skills like blocking, receiving, game management, etc are coming along?

I’ve got a section on him tomorrow in First Pitch.

Impeccable timing as always, looking forward to it!

Endy deserves a late September cup of coffee like Cruz and Contreras got!

Caught stealing percentage in A+ was 27%; in AA so far, 45%. BA has a great article about the Caught Stealing percentages of minor league Catchers being very low because of the pitch clock. Obviously, Endy has not read that. He is a complete product defensively, with a bat in a Catcher we have not seen in a very long time.

Straight business – he was challenged being sent to AA (even though he is already 22), and he has more than proven himself. There is no reason to waste another 15-20 days at AAA. Straight to Pittsburgh. He’s a switchhitter who has also played 1B. That’s where he needs to be in preparation for being the Pirates front-line Catcher possibly in May or June, 2023. If he joined the Pirates tomorrow, he will get only 15 days of MLB Service – negligible.

A two day call up might be interesting, but he deserves a lot more than that. These are the Pirates though so he’ll be sitting in the minors at least until mid 2023 even if he hits .500 and throws out 90% of base runners until then.

And he’d still be an entire year younger than MLB darling Baltimore Orioles called up the number one prospect in all of baseball who’s immediately vaulted into the top catcher in the game, you complete f*cking moron.