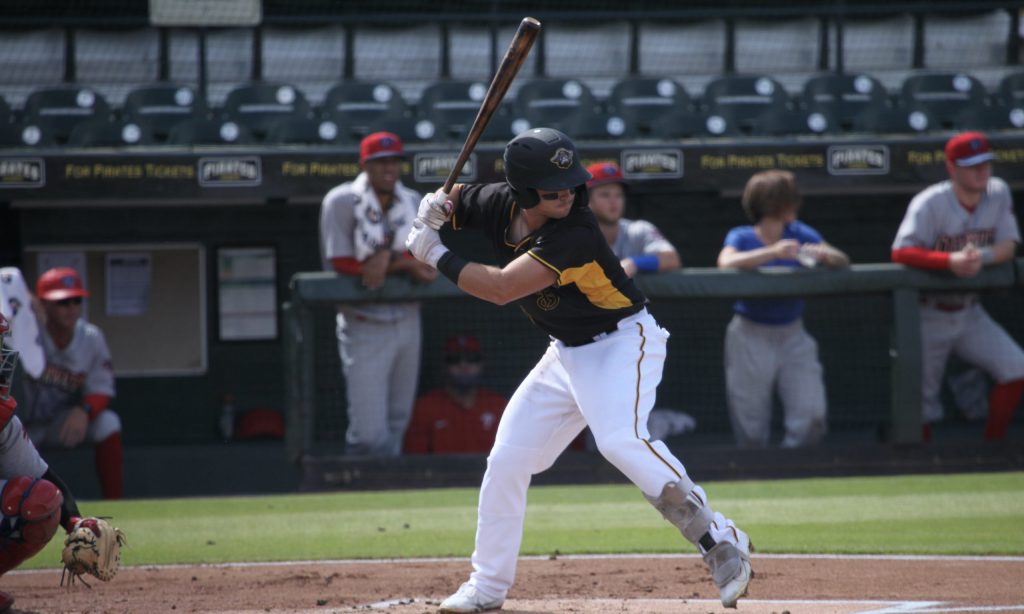 Greensboro opened up the flood gates offensively, scoring 11 total runs on Sunday. One of the biggest outburst was by Jackson Glenn, who hit a bases clearing double.

Jackson Glenn with a bases clearing double, tying up the game in the sixth. #LetsGoBucs pic.twitter.com/bDrwHUy3p4

The 23-year-old Fajardo picked up three hits on Sunday, including this RBI triple in the ninth inning.

Yoyner Fajardo with a RBI triple to give Greensboro a 11-7 lead in the ninth #LetsGoBucs pic.twitter.com/wtIt1uxAIn

Lopez continues his strong play on Sunday, picking up another three hits. He’s batting over .400 in the month of August. He drove in a pair of runs with this single.

Dariel Lopez with a two run single in the seventh inning for Greensboro #LetsGoBucs pic.twitter.com/FBY1ZW0WIH

Acuna picked up his 14th double of the season, driving in a run.

Francisco Acuna with a RBI double in the ninth #LetsGoBucs pic.twitter.com/gq1mAKFFyy

The Pirates drafted Maggi in the 15th round back in 2010. Now, 12 years later, he’s back in the system after Pittsburgh reacquired him. In his two games with Indianapolis, he’s picked up a double in each, and his hit on Sunday drove in a pair of runs.

Peguero has struggled with some errors this season, but is still no stranger to making the highlight reel stop. Here he makes one while playing defense.

Rodriguez has been the talk of the system for his offense, and for just cause. But it’s more than just that, as he’s a more than capable defender behind the plate. Here’s a prime of example of that.

Too many people talk about his offense, which has been amazing. But it’s his defense why I believe he’s climbing up the system ladder right now. Watch how he back hands this out the dirt, double clutch and still gets the runner. All around amazing play #LetsGoBucs pic.twitter.com/7sfHTIcp7M

Here he catches an one-hopper, back-handed, double clutches the throw and is still able to get the runner out.

Murph, do the Pirates have *all* catchers setting up on one knee now throughout the system?

Will the pirates protect him in next years rule 5 draft?

I assume he means Endy. And if so, it’s a given he’ll be protected.

this may sound crazy but lopez’s swing looks pretty similar to miguel cabrera. does anyone else see that?

Know you’re not saying he HITS like Miggy but I can definitely see the resemblance. Does a lot of things really really well mechanically, love watching this dude hit.

but that is a nice looking swing. love to see it!

All I’ve seen from Dariel this past week was good contact, nothing was hit weakly his outs, his singles all were well hit, he’s exciting.

Why not Castro at 1st? Why do you think Malcom…