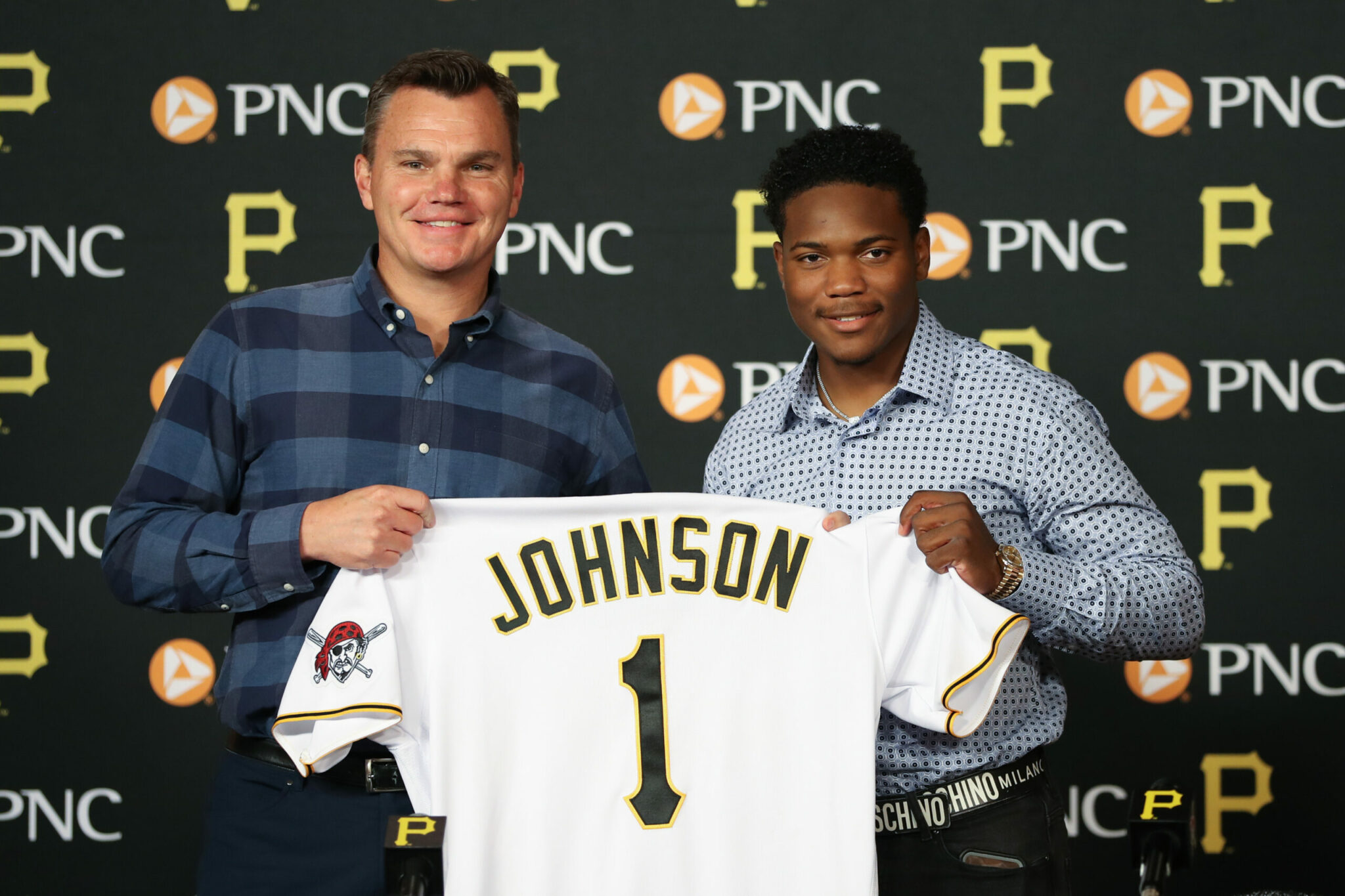 Baseball America updated their top 100 prospects list to include draft picks and the Pittsburgh Pirates have four players on their new list. The group is headlined by a new name.

First round pick Termarr Johnson is ranked 46th over by BA on the new list, tops for the Pirates. He ranks fourth among draft picks from this year, trailing Druw Jones (21st), Brooks Lee (40th) and Jackson Holliday (41st).

Second for the Pirates is Quinn Priester, who was dominating Double-A with Altoona until his last start this weekend. He ranks 69th on the list.

He’s followed by Liover Peguero in the 82nd spot. Then Henry Davis ranks fourth in the 86th spot.

The last update from BA still had Oneil Cruz on the list, but he’s no long eligible. The Pirates had four players that time as well, with Davis ranked 44th, Peguero 68th and Priester 74th. Davis was already not playing when that previous list came out, so they really knocked him for missed time. Even though draft picks are part of this now, there have also been players who have graduated from the list. Only eight players ahead of him are draft picks. The opposite can be said for Priester, who moved up five spots despite new eligible players on the list, while Peguero isn’t far behind his old ranking when you factor in the draft picks.

Anyone care to post the cliff notes from Kiley’s org ranking article today?

“The Pirates have graduated a number of players from their preseason list: SS Oneil Cruz, RHP Roansy Contreras, SS Diego Castillo, 2B Rodolfo Castro and LF Jack Suwinski.
I loved their draft haul, headlined by new top prospect 2B Termarr Johnson, bolstered by RHP Thomas Harrington, LHP Hunter Barco, LHP Michael Kennedy and RHP/3B Jack Brannigan. The Pirates were largely quiet at the deadline aside from grabbing 3B Malcom Nunez from the Cardinals in a deal for Jose Quintana. There haven’t been giant jumps forward at the top of the system, but C Endy Rodriguez has continued hitting and was bumped up to a 50 FV.”

I liked our draft, but I hadn’t seen it referred to as a “haul” or someone express “love” for it 🙂

Thanks man, there’s my Endy bump!

hopefully nobody’s too horribly offended by the list. anyone who thinks the difference between the 60th best prospect and the 200th best prospect is particularly big is probably overrating that difference. im sure plenty of guys would rate in the 100-200 range.

still surprised they passed on him with their second pick. instead taking…..sammy siani…ouch

I wonder if the Orioles are the first club to produce two #1 prospects out of the same draft?

I don’t know but that fanbase is ready for a winner. Nice crowds all weekend

but it’s nice to see their rebuild finally turn for the better. hopefully the pirates can follow suit soon enough

I vaguely remember the chorus of “we don’t need another shortstop” during the halcyon days of working through the “glut” of Newman, Tucker, Alemais, etc.

I’m really starting to worry about Peguero. He might need to repeat AA next year, or at least start the season in Altoona.

I’m a believer of earning promotions and this kid hasn’t earned anything. Needs major refinement on both O and D.

I’d love to know what his #’s are since he got a stupid cup of coffee early this season.

he has some things still working for him such as his age and not being *horrible* this yr. i’m not giving up on him. but anyone penciling him at shortstop over oneil cruz at this point is being unrealistic until further notice.

IIRC the entire P2 roundtable was then being unrealistic when they all picked Peggy as the future Pirates SS over Cruz, article was about 2 months ago! My how things change fast.

His rate stats are .211/.294/.273 since his call up. That’s obviously pretty ugly, but it looks worse from the AS break, as he’s 9 for 52 with only one extra base hit (a homer), three walks and a HBP. It’s been a rough patch for sure, but still some time left this season for him to right the ship.

Maybe he is trying too hard since he had that cup of coffee and he wants to get back too bad??

I’d love to know what he’s working on during that stretch.

I found this to be pretty cool, at Fangraphs, you can select which teams to add and create your own list of teams. Here’s what the NL Central prospect list looks like (if link works)…