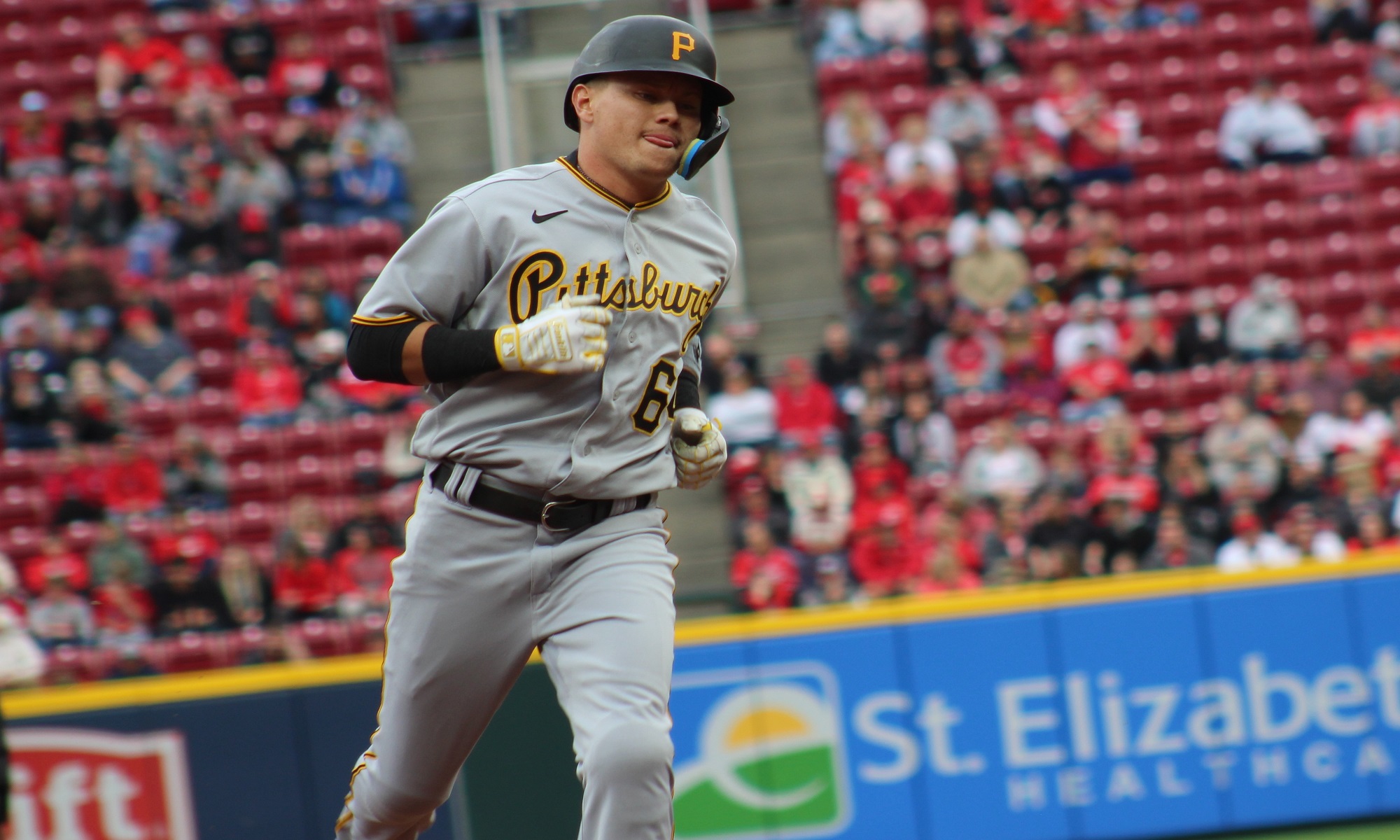 Diego Castillo graduated from prospect status recently, after getting a shot in the majors following a strong Spring Training.

As part of our Roundtable series on Pirates Prospects, when a player exceeds his prospect eligibility, we will give an evaluation of what we have seen and expect from him going forward.

At this stage in a player’s career, we get an idea of what a player could become, though there still may be some projectability remaining. That’s especially true for someone like Castillo, playing in his age-24 season.

Here is The Book on Diego Castillo…

Diego Castillo has basically been as advertised in the majors, which is a good sign for a player who hasn’t been out there every single day. He also came into this season with minimal Triple-A experience and no big league time, so his Opening Day roster spot was a bit of a push. The hitting stats aren’t anything special, but he’s doing an excellent job as a utility player, serving a role usually taken by veterans, not 24-year-old prospects. That’s a great sign going forward, as you would expect better results as he gets more big league experience. Castillo has shown some flashes of brilliance and an ability to come up big off of the bench. That type of confidence from a player at a young age in the majors gives me confidence that he can continue to have big league success in a utility role, possibly turning it into a starting role. I rated him as the 19th best prospect coming into the season. That was based on his work in Double-A/Triple-A last year, with a nice BB/SO ratio and excellent power numbers, to go along with the solid defense in the middle of the infield. The BB/SO rates aren’t near that level in the majors, but he’s not over-matched by any means, so in this instance, I think that ranking has held up well so far. There’s definitely a chance he exceeds it though going forward.

Castillo isn’t a toolsy player, but analytical types latched onto him after a breakout 2021 season, which led the Pirates to acquiring him that year at the deadline. Up until then, he looked like a run-of-the-mill, upper-level utility player, but he suddenly started driving the ball more. That led to 19 longballs between AA and a late-season stint in Indianapolis. What attracted the analysts was a high contact rate and lots of balls hit in the air. He’s struggled badly lately, going 16-for-108 between May and June (as I write this), with a sharp increase in his K rate. His K% generally sat somewhere around 10% in the minors, but it’s 26.9% in the majors now. He’s also drawing very few walks. The Statcast data provides some reason for optimism, as his exit velocity and hard-hit rates are comfortably above average for MLB. He also has an exactly average chase rate. His biggest issue seems to be taking too many pitches in the strike zone, which should be fixable.

Defensively, Castillo may be a lot better than Pirate fans are giving him credit for. In an obviously small sample size, the metrics – both OAA and UZR – have him above average at short, second and third. He’s been bad in the outfield, which has been the consistent pattern with the Pirates’ infielders-in-the-outfield idiocy. (Tucupita Marcano appears headed that way, too.) He’s already becoming noted for heads-up-play in the field; having impressive tools isn’t everything. If the Pirates would actually use him where he’s good – radical, I know – he should be just fine.

Diego Castillo has always had a great approach at the plate, the difference came with the power surge he experienced last year. That’s what really threw him into the conversation as a legitimate major league prospect. The biggest question was if the power he grew into last year would carry with him to the majors. He’s shown some pop but has really struggled as of late. He seems to fit well in the platoon role against lefties and has provided solid defense around the infield. His upside kind of put him into a bench role going into the year, and he’s kind of proven to be just that. If he continues to hit lefties the way he has, Castillo could remain to be a bench player, if it slips, he could become a tweener.

Castillo has been a bit of a surprise for the Pirates, originally coming over as one of two players in the Clay Holmes trade last year. The Pirates seemed to be buying into an emergence of power that came up post-pandemic, with Castillo hitting for a .228 ISO in Double-A with the Yankees. He went on to put up good numbers with the Pirates, showing good contact skills and plate patience to go with the pop in his bat. The Pirates moved him to the majors this year after continuing those 2021 trends in Spring Training. He hasn’t carried the power over to the majors, but also hasn’t looked overmatched. Castillo has a .196/.242/.296 line, and has been slumping a lot lately. He’s got an .098 ISO. His strikeout rate (23.6%) isn’t bad, and he hits the ball hard, with only a 12.9% soft hit rate this year. He did a better job of putting balls in the air in Double-A, but has been around a 44% ground ball rate so far in the majors. The biggest thing that stuck out to me was his positive results across the board at shortstop. Those include a 9.7 UZR/150, and a +1 on Defensive Runs Saved and Plus/Minus — all in 221 innings. Defensive sample sizes are best across multiple seasons, so we can’t say that this is the true value from Castillo.

What we can say is that he’s shown a lot of promise across the board. He’s shown some abilities in small samples, while other abilities — particularly his power — still have the potential to show up. I have a hard time believing he will continue hitting almost 80% medium or hard contact, with decent strikeout rates, and not end up hitting for better power numbers. Castillo has the makings of a very solid utility infielder whose bat can help off the bench. I could see him having a shot at developing into an average starter for a year or two — either as an injury replacement on a contender, or for a bad team trying to give him a shot. You know, like this year’s Pirates team. That would largely require the power to increase in the majors, pairing with the defense up the middle and contact skills.

If the Pirates had a real first baseman Castillo probably only has one error the other day. The best infielders in the game don’t make clean throws every time. Many of them are throwing to Gold Glove first basemen or guys in the running. But these young guys also need to pay attention to who’s running and they might be able to make better throws. Not excusing Castillo’s throws in the dirt but Chavis looked a little gun shy after he got hit in the noggin, lol.

Anyone who can play SS can become a good outfielder. But it takes time. Speed, arm, athleticism are all there, but routes and playing balls off the wall take practice.

Also not concussing other players. Who was the Pirates’ uber-prospect who died after a collision?

I like Castillo and Castro being our bench guys getting 400 ABs a year bouncing between IF and OF. Cruz and NickG will be the starters with Hayes.

Them or Peguero and Bae. Been a long time since the Bucs had talented players who didn’t win the internal competition.

I haven’t seen a ton of games this year, so SSS applies, but I think Castillo’s power is pull side, but pitchers have generally stayed away & right now that leaves him relying on mistake pitches to drive for power. It’s a good sign that he’s keeping his head slightly above water while working on his weakness at the big league level.

Castillo is still a run-of-the-mill minor league utility player. If he were in a good team’s organization he would remain a minor leaguer. For the Pirates, he has a future. Of what I don’t know.

None of us do. With mature players you’ve got a narrower range, but still. Bill Robinson failed with the Yanks and the Phils, but was a good player with the Bucs.

BTW these are amazing athletes. And many fail.

I agree that castillo has potential hold a significant future role for us, but i think had we had another right handed bat then he would have been back at AAA already. Maybe a future as a cruz/other infield defensive replacement late in games with a start 1-2 times per week against LHP

They are definitely letting him develop in the majors. He’s not ready right now.

now that he has dipped below .200 batting average, it is time for another infielder to get a look

JimEastTennessee
MLB
Reply to  b mcferren
#367293

Bae has had the best season by far

When the FO thinks he’s ready, he will be promoted. If they don’t, he won’t. And I would argue that this is the most thoughtful FO since Joe L. Brown. (Full disclosure, I vaguely knew Littlefield and listened to the Joe L. Brown for years.

Should be a closing ), but I don’t have an editor for blog posts. Mea culpa.