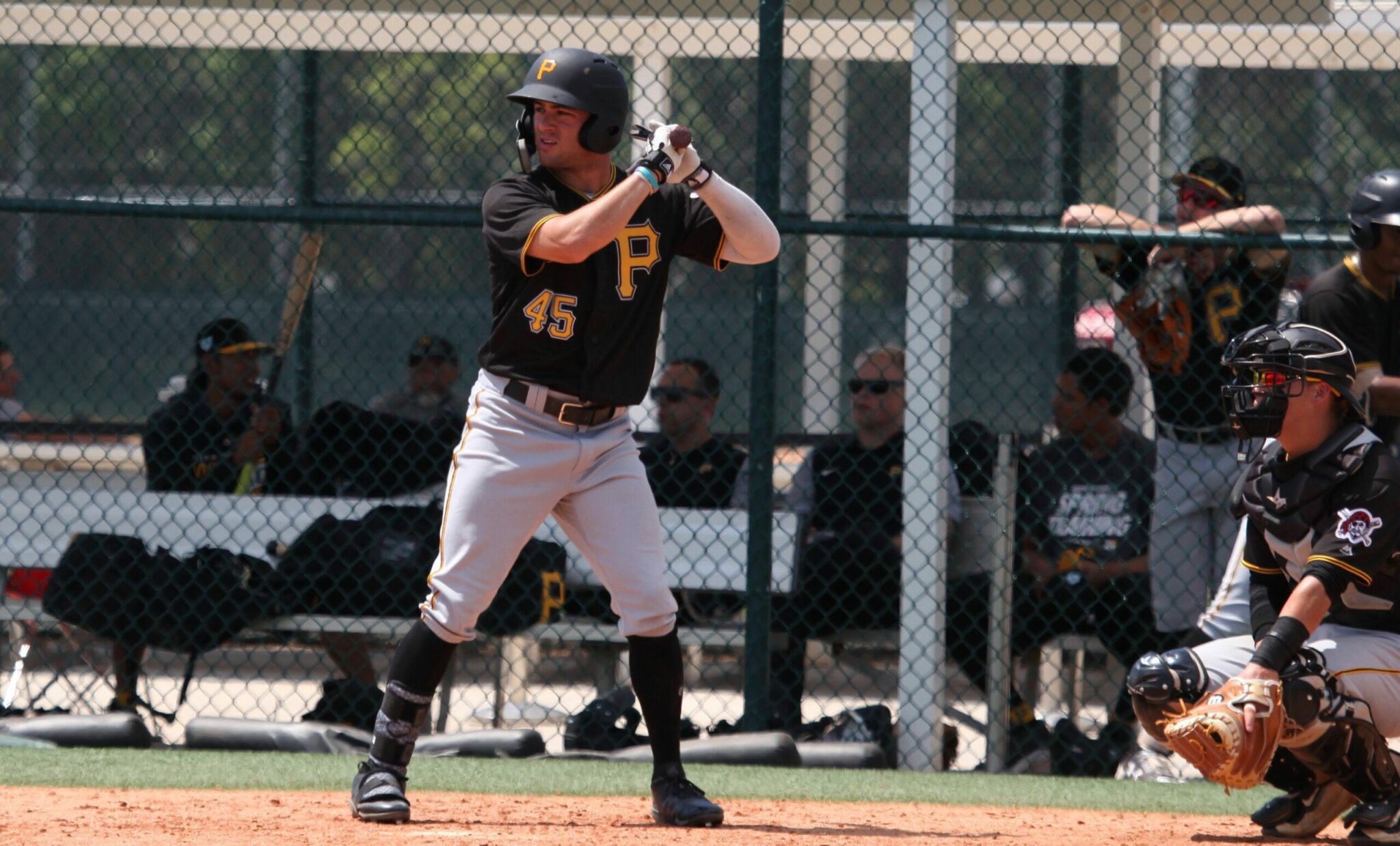 You need to have a big week on offense to win the Player of the Week honors while playing just four games. Travis Swaggerty did just that, though he had a good excuse for not playing more games for Indianapolis. He found out that he was called up by the Pirates on Saturday, right before his was supposed to play that night. He did enough damage Tuesday through Friday, hitting .533/.632/1.067 in 19 plate appearances, with two doubles, two homers, seven RBIs and four walks. That was enough to earn him Pirates Prospects Player of the Week honors.

Swaggerty missed almost all of last season due to a shoulder injury. That set him back a year, but it took just two months in 2022 to get the call to the majors, and he should make his big league debut tonight. He started off this season very slow, with an extremely high strikeout rate, especially for a player who isn’t a big power hitter. Through 19 games this year, he was hitting .174/.269/.232 in 79 plate appearances, with 29 strikeouts. He missed just over a week with a concussion in early May, but he’s been hitting well since he returned. Swaggerty flipped a switch on May 17th and since then he has hit .397/.465/.667 in 16 games, with 13 strikeouts in 71 plate appearances.

The success is obviously a small sample size. He didn’t magically become big league ready over a 16-game stretch after an awful 19-game stretch to start the year, but it was enough to get him pushed to the majors when a spot opened up over the weekend. We will see how he can handle his first big league trial. He will get some time to prove himself before any of the six big league position players on the injured list returns, which will then make for some interesting decisions. Swaggerty is getting called up while he’s on a hot streak, though three straight days (Saturday-Monday without playing isn’t ideal for anyone on a streak. We will soon see if he can secure a long-term spot for the Pirates this year. They have recently been embracing the rookies in the lineup, so that plays in his favor. It’s up to him now to seize the opportunity.

Analysis: Besides Swaggerty, Indianapolis also got a big week from Bligh Madris, who was last week’s Player of the Week. He hit .333/.455/.722 in 22 plate appearances, with a double, two homers and a walk. He has an .839 OPS in 34 games. Oneil Cruz posted a .930 OPS, though he only had 13 plate appearances in three games, missing time due to an ankle injury. No one else was close to an .800 OPS.

On the pitching side, Blake Weiman tossed four shutout innings on one hit, one walk and five strikeouts. Jerad Eickhoff had a strong start, throwing five shutout innings on one hit, one walk and three strikeouts. Cody Bolton allowed one run on two hits, two walks and seven strikeouts in his start. Bryse Wilson went seven innings in his second start back with Indianapolis, allowing two runs in the win. Cam Vieaux allowed one run in 3.1 innings, as he continues to quietly have a strong season. Batters are hitting .122 against him.

Analysis: No one ran away with this team’s Player of the Week award, as three hitters all got votes. Blake Sabol ended up winning with his .983 OPS in 22 plate appearances. He went 7-for-21 at the plate with a double, triple and a homer. For the season, the 24-year-old catcher is hitting .310/.388/.531 in 40 games, with 17 extra-base hits. Brendt Citta led Altoona with a 1.038 OPS, the third best mark in the system for the week. He hit .353 with two doubles, a triple and two walks in 20 plate appearances. Andres Alvarez put up a .928 OPS in 24 plate appearances, as he saw regular action with Nick Gonzales out this past week. Alvarez has a 1.008 OPS in 32 games this year. Matt Fraizer had a .960 OPS in 21 plate appearances, as he continues to show improvements. Aaron Shackelford had a .375 average and a .917 OPS in 24 plate appearances, which only made him the fifth best hitter on the team. Jared Triolo put up a .364 average and four walks in 26 plate appearances, en route to an .825 OPS. All of his hits were singles, so he earned this mention by getting on base at a high rate. Matt Gorski gets the “just missed” award by putting up a .790 OPS in his second week with Altoona.

On the pitching side, Tahnaj Thomas tossed four shutout innings, with four strikeouts. Tyler Samaniego threw three shutout innings, extending him to 16.1 innings without a hit, dating back to the last one he gave up on April 15th. Bear Bellomy had three shutout innings on one hit, no walks and no strikeouts. Brad Case had his second strong long relief outing in a row, giving up one run over 4.2 innings. Kyle Nicolas allowed one run in 4.1 innings, striking out six batters. However, he went down with a shoulder injury. Noe Toribio gave up one run over three innings and struck out four. Travis MacGregor was strong in two relief appearances, allowing two runs in six innings, while striking out ten batters. He has been outstanding since switching to relief, putting up a 2.00 ERA and 34 strikeouts in 27 innings.

Analysis: Yoyner Fajardo was recently featured here as the man without a position. He played five times last week, two at DH, two at second base and once in right field. He put up a 1.035 OPS that ranked as the fourth best in the system last week, and tops among Greensboro hitters. That gives him a .330/.378/.495 slash line in 24 games. Ernny Ordonez had a 1.000 OPS, though he batted just 11 times. Abrahan Gutierrez got some Greensboro Player of the Week consideration by putting up a .925 OPS in 25 plate appearances. He actually went 0-for-7 to start the week, and he had a .688 OPS through 40 games going into Thursday’s action. He raised that season OPS by 61 points in the last four games. Everyone else on Greensboro fell below a .700 OPS for the week.

On the pitching side, Cameron Junker had 3.1 no-hit innings with five strikeouts. Nick Dombkowski allowed one hit in 3.2 scoreless innings. He has a 1.73 ERA and 41 strikeouts in 26 innings this season. Ricky DeVito allowed one hit in three shutout frames. Nick Garcia had a strong start, with one run over 5.1 innings, on four hits, one walk and five strikeouts. Eddy Yean gave up one run over three innings.

Analysis: Joelvis Del Rosario was featured here last week after an impressive looking performance led to a breakdown of his arsenal. He hasn’t allowed an earned run now in his last three starts after putting up six shutout innings on five hits, no walks and seven strikeouts last week. On the season, he has a 2.78 ERA, with a 1.21 WHIP and 36 strikeouts in 35.2 innings. Po-Yu Chen was right behind Del Rosario last week (they both put up 69 Game Scores) with five shutout innings on two hits, one walk and seven strikeouts. He is holding batters to a .206 average, with 47 strikeouts in 38.1 innings. Joe Jacques (on rehab) had three shutout innings and four strikeouts. Anthony Solometo allowed one run over four innings in his second pro start. Valentin Linarez allowed two runs in six innings, while striking out six batters.

On offense,  Jase Bowen led the way with an .875 OPS in 24 plate appearances. He hit .318 with a homer, double and two walks. He has a .746 OPS in 48 games, which is 81 points higher than the league OPS. Rodolfo Nolasco batted just .200 for the week, but he had an .860 OPS in 25 plate appearances. Two of his four hits were homers, and he drew four walks. He has a .633 OPS after a slow start to the season. Grant Koch got forced into Low-A time at 25 years old after Bradenton lost both of their catchers (one injury/one demotion). Koch put up an .802 OPS in five games. Luke Brown had a .788 OPS, though he only batted 11 times.

I was hoping for a big week out of Guti. His home OPS was rather ridiculously low

Maybe the knock in the head Swaggerty took released his demons and made him focus on hitting the ball.