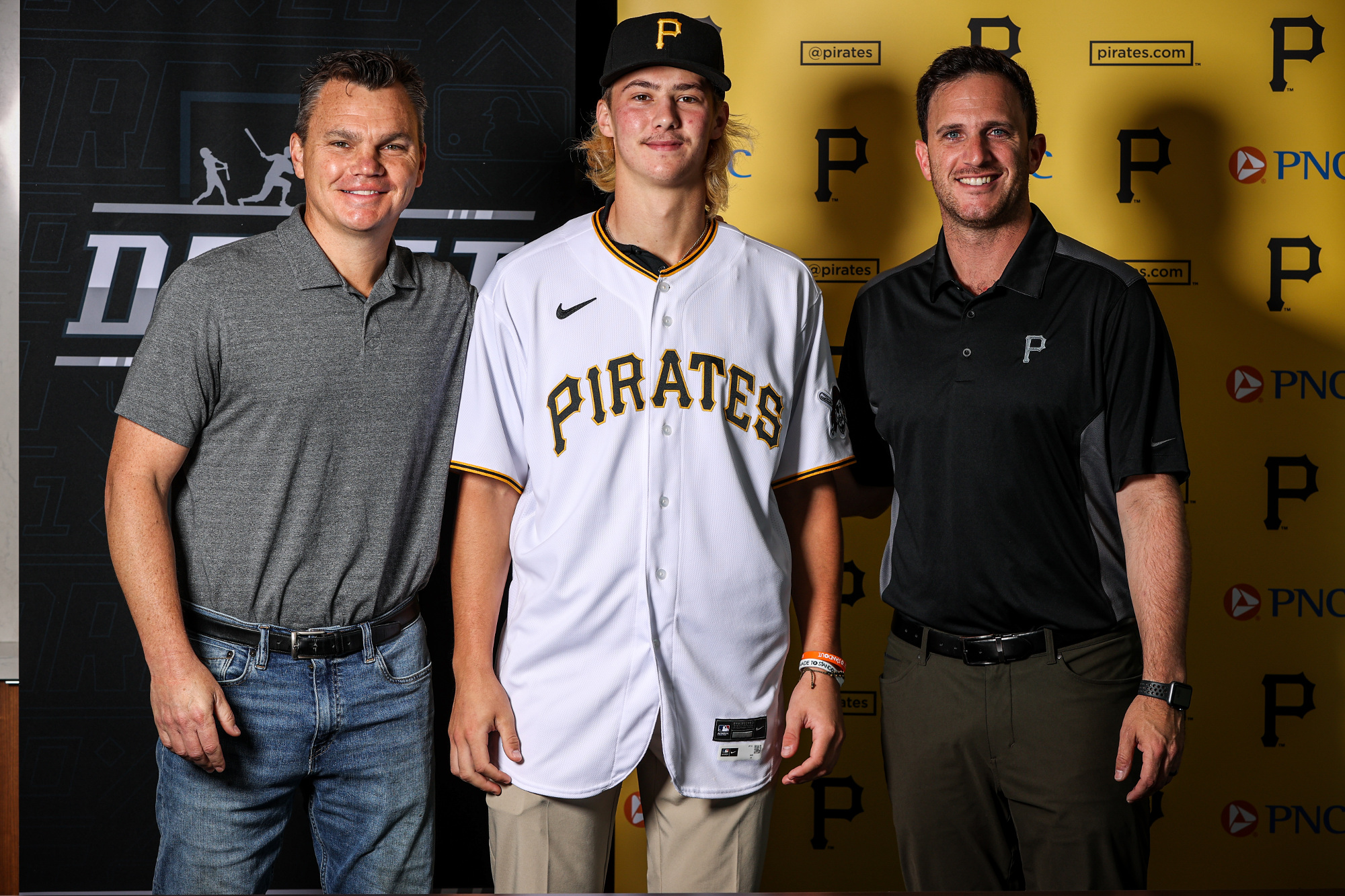 “Every once in a while, he does something really special with the bat,” said John Baker, hours before first pitch. “He randomly puts one out there 109 [MPH] over the fence.”

Chandler, drafted by the Pirates in the third round last year and given a $3 million bonus, is going to be playing in the FCL this year as a right-handed starting pitcher and a designated hitter. The two-way prospect is currently up to around four innings of work in his starts — his FCL debut was shortened by rain — and has been making strides with his hitting. He was working at shortstop in Spring Training, but the Pirates are keeping things simple, just giving him the bat in addition to pitching.

“That’s the current plan,” said Baker. “It could change, depending on how the pitching development is going.”

Chandler was a top draft prospect due to his raw athleticism and his drive to be the best at everything. He’s very raw at this point as a baseball player. Here is a breakdown of where he’s at on either side of the ball.

Chandler has the basics of an arsenal, with a fastball, breaking pitch, and a changeup.

“We’ve been really excited about his fastball,” said Baker. “Very promising pitch. He’s really focusing on landing secondary pitches. When that happens, it shouldn’t be long until he’s out at an affiliate.”

That’s promising to hear that Chandler could join fellow 2021 prep pick Anthony Solometo in the Bradenton rotation this year. As for those secondary pitches, they’re a bit of a mystery right now.

“These kids are so young, you have an offspeed pitch that’s spinning, and you have a changeup,” said Baker. “As they go through all of this foundational throwing development, you think of somebody like Bubba, in the past he would have stopped and started throwing a football. Giving him enough time for us to figure out who he really is. What can he do with the ball? How can he manipulate the baseball?”

What Baker highlighted the most of Chandler is his competitive drive.

“At the end of the day this is an elite competitor,” said Baker. “This is somebody that thrives off of competition against other people. He wants to compete. Because he wants to compete, he’s crafty. He’ll figure out ways to get that done, where what we need to do is figure out what that breaking ball is going to look like, and the only way we’re going to know that is to see what he does in a game, and then we can build off of it.”

I love that the Pirates finally have a two-way player. Who knows if it will work?

But, as long as Chandler keeps hitting like he did on Monday — 2-for-4 with a homer, a walk, and a stolen base — he will keep the hitting hopes alive.

Chandler’s swing has looked extremely raw in the past, and at some points disconnected between his upper and lower half. As Baker said, he’s had his focus spread thin. The important thing is he’s a fast learner, and has already taken positive steps with his hitting.

“The strides he’s made in only a couple of months since Spring Training have been impressive,” said Baker. “He wants to win every drill that we do. He wants to win every set in the weight room. He wants to win everything, all of the time. He’s hyper-competitive. That’s the great part. We don’t have to coach that up at all. The polish is going to come from experience. He’s starting to get those experiences in extended, now the FCL, and with a little bit more refinement, we’ll see him in Bradenton.”

Can we finally start to have nice things ….

Is funny, Baker said nothing and yet it sounds like great compliments. He’s very raw with big tool potential which is expected is what I read. Not saying is bad.

Last edited 21 days ago by PirateRican21
1

Does a LOT of that.

I like hyper-competitive ball players. All the most successful athletes possess this attribute.

Just get better from one day to the next.