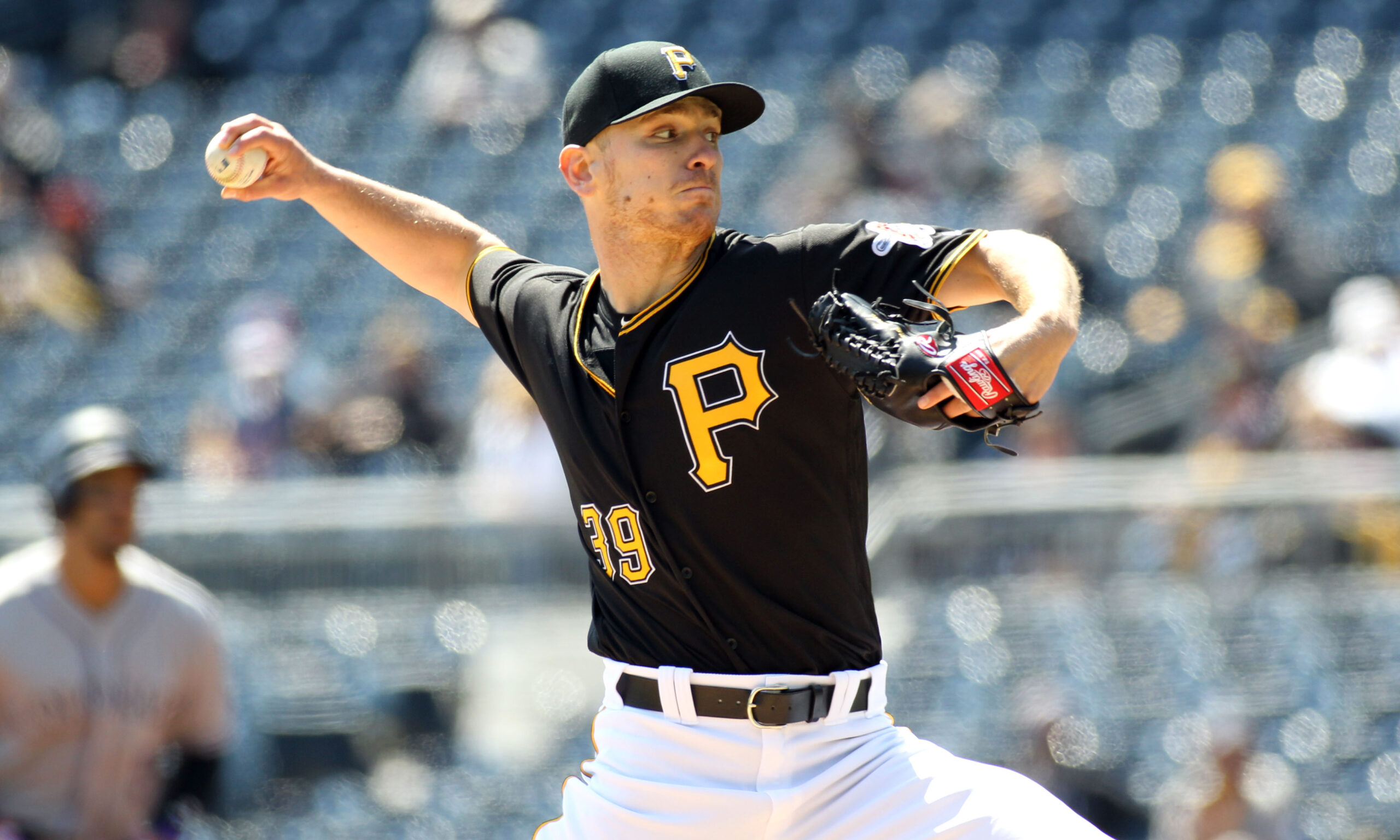 The Pittsburgh Pirates (16-24) take on the Colorado Rockies (19-21) at PNC Park on Monday night at 6:35 PM, in the first game of a three-game series. The Pirates are sending out JT Brubaker (0-4, 5.50) for his ninth start of the season. The Rockies are countering with former Pirates starter Chad Kuhl (3-2, 3.86), who is making his eighth start of the season. He was doing great until his last two starts, which resulted in ten earned runs in 7.2 innings.

Prior to the game, Yerry De Los Santos was added to the active roster.

Here are the lineups for today:

Some game takeaways:
1. Thankful I don’t have to watch Kuhl heave it, I mean pitch, anymore.
2. Shelton needs to call a PFP on Thursday. What’s the point of having PFP only in Bradenton, when none of our pitchers are good at fielding/throwing.
3. Kebryan has very good hand eye coordination……he might challenge for a batting championship. The ball is dead this year, might as well take the slashes, dinks and high OBA.
4. Brubaker’s confidence is growing.
5. Bednar makes All-star team. If Shelton doesn’t burn him out first.

Nice list of takeaways, and this team is playing at the highest level possible for the talent level. Counting at least 3 players who will be popular as the trading deadline approaches – Daniel Vogelbach, Michael Chavis, and Ben Gamel, and possibly 2 or 3 RP’s such as Chris Stratton, Duane Underwood, and SP/RP guys like Chase De Jong, etc.

However, IMO, no list is complete without wondering when Shelton will be shown the door, and could the Pirates have a more inept pairing of Catchers than Michael Perez and Tyler Heineman? Why not try something different like DFA Heineman and call up Jason Delay? Perez at least provides a LH hitting batting Catcher.

The one thing Shelton can’t f*** up is Bednar. Hard to imagine what the record would be without him.

That’s true if he had more Bednars we wouldn’t be bashing him like we do.

Last edited 1 month ago by mikeschalke
0

There really aren’t many Bednars. The guy is elite.

Maybe not but I’m sure he can Yerry!

Got one more than the Rox. All that matters.

This offense is so…God awful. Even the way they score a run doesn’t look MLB quality.

It pays to have power in the middle of the lineup

Last edited 1 month ago by roibert.kasperski
2

It’s pretty clear that Castro’s either gonna win this game or lose it.

So Walker just justified taking Crowe out because they wanted to keep his pitch count down. He was at 13 pitches.

Hopefully we’ll win it in 9 because the move just cost us Bednar for a possible 10th.

If you’re not going to be good, you might as well be interesting.

Castro is definitely having an interesting game

Last edited 1 month ago by MWT
2

I don’t know how they overturned that and I almost wonder if Castro’s “taunting “ played a factor. (I was fine with Castro’s safe call over Diaz but it would have drawn a flag in the NFL.)

I know. The one shot from the 1st base side looked like Diaz might have gotten Castro’s left calf right before his foot hit the plate. I only saw that angle once and NY can blow it up in high def. Bummer.

That’s possible. It didn’t look clear enough to overturn but we don’t have access to the views they have. I’d love to see MLB share their camera shot when they overturn a call. There doesn’t seem any reason not to.

Just realized Crowe is in. Just got home during the bottom of the 7th.
belated Happy Crowe Day Y’all!!!!!!

The Pirates’ two catchers are now batting a combined .098.

Actually, they’re not. Heineman seems to be pretty good, but MPerez ranks 56 out of 75.

Well, then, Perez is there for his bat and that’s why Shelton didn’t PH for him.

I was taking the great framers as sarcasm. Maybe the both are really good at putting up house walls and roof trusses. That would make them great framers just not the pitch kind 😀

Last edited 1 month ago by roibert.kasperski
2

The catchers are who they are; we have a GM who evidently didn’t think we’d actually need decent catching depth.

Just saw a shot of the stands on twitter. There can’t be 3000 people there. The GM must not have thought they need fans, either.

I’ll never fault someone for going to a game, but poor attendance sends the right message to Williams.

Williams getting the message.

Why are all these LH hitters batting in key spots against a LHP who’s terrible against RH hitters? Where did Chavis go? Is Shelton watching the game?

With Chavis and Castillo on the bench Shelton must be considering it one of his stupid f***ing teaching moments or he’s really that stupid!

This is some of the worst managing I’ve ever seen. Mind-numbing incompetence.

Dude probably thinks he’s really good at it since he keeps harping he puts it all in place but they just don’t execute. just because you have a bad roster doesn’t mean you can do ‘stoopid’ shit!

My biggest concern with Shelton is his ego—not once have I heard him suggest that he can do better. It’s only the players who need to get better.

Castro racking up the negative points…

Last edited 1 month ago by roibert.kasperski
0

Well, got spiked? Got glove.

Reynolds! Right-handed batters hitting .352 against his guy. How did Reynolds turn into the worst #3 hitter in the league?

Chad Kuhl is a lucky man. He’s got a good fastball with great movement and he’s got a pretty wife and a sweet little baby.

Is Ke’Bryan Hayes good enough to be the best player on a championship team?

No and don’t think he ever will be that guy. A nice piece, if he ever figures out how to make contact in front instead of letting every pitch get way in his kitchen he could be 3rd 4th best player.

Castro runs us out of another critical inning/run. Gets hand cleated at 2nd. This is not fun to watch.

How do you beat the throw by that much and still manage to get yourself out.

Brubaker game came off the rails last game around now,

He was popular in Missoula and I talked to a couple of his teammates one night in a bar here and they said he was a great guy and everyone on the team knew he was going to be a major leaguer someday.

When he first started talking, I thought I heard a southern accent, which totally threw me. He is not Southern.

Dang. The Pirates vs. the Pirates, huh?

Who did we trade Conor Joe for?

I love his game… And his sweet, silky hair.

The bottom of this lineup is soo bad

It is, but at least they all hit the ball hard that inning.

Chad Kuhl is a starter.

Well, I thought they might actually have a big inning.

Then again, I suppose they did.

Dang!! If Vogy slices it just a bit more..

Last edited 1 month ago by roibert.kasperski
1

Last edited 1 month ago by PirateRican21
1

Missed it by that much………

Gamel looks like a Duck Dynasty character with his beard, trust fund baby without it.

Last edited 1 month ago by PirateRican21
0

Call it sour grapes if you will, but I am GLAD we started off with a run against Kuhl.

Hey If I remember right, If Kuhl got through the first, he was good. He would tend to get himself in a hole in the first and 2nd. innings. and then pitch great gut the Bucs could not score enough to get back in it

Didn’t even have to wait until we were down by ten.

Fangraphs on Diego Castillo: “A few analytically-minded team personnel advocated for Castillo’s inclusion in our in-season updates to the Top 100 because he has elite in-zone contact rates, hits the ball in the air a lot, plays the middle infield, and has performed on paper at the upper levels.”

I’m not sure Derek Shelton fills out the lineup card without approval. Something seems hinky about this whole month of sitting Castillo in favor of VanMeter and playing him in RF. Watching Castro play everyday instead of Castillo just seems weird.

Connor Joe and Diaz with a bomb each and Kuhl with a shutout. Book it!

Not tonight. Kuhl’s the one who gets bombed. He gives up, at least, two, maybe three jacks. Chad can’t pitch on the road. Brubaker picks up his first win of the season.

Except for his last 2 starts Chad has been good no matter where he pitched. 10 of the 16 Earned Runs he gave up this year were in his last 2 starts. Against the Pirates he will probably throw a 2 hitter tonight.