Baseball America posted their list of the top 200 prospects in the 2022 draft on Monday. There was some movement among the top ten prospects, with one player making a large jump in the rankings. The Pirates pick fourth overall in the July draft, so anyone in the top ten should be a possibility at this early stage.

The top five spots stayed the same for BA, with Druw Jones and Termarr Johnson leading the way, two prep players from Georgia. They are followed by Cal Poly shortstop Brooks Lee, who has been mentioned at least twice in mock drafts as the pick for the Pirates. In the fourth spot is Jace Jung, second baseman for Texas Tech, followed by Elijah Green in the fifth spot. Green was the top pick in this draft for many people at this point last year, and he’s playing in the backyard of the Pirates spring home at IMG Academy in Bradenton.

The first change is right-handed pitcher Dylan Lesko moving up to sixth overall. He’s the third prep player in the top six spots from Georgia in an incredible year for elite talent in the state. The seventh spot is another Georgia player, catcher Kevin Parada from Georgia Tech. He was 15th in the last rankings. He’s followed by LSU third baseman Jacob Berry, who remains in the eighth spot, then Gavin Cross, an outfielder from Virginia Tech, making it three straight college bats in the 7-9 spot and five total in the first nine spots. Cross inched up from the tenth spot. The big mover is Jackson Holliday, a prep shortstop out of Texas, who moved up 22 spots to tenth overall. He’s the son of Matt Holliday.

We will have more on all of these players, including a gathering of scouting reports and videos for each player in the top ten (assuming none of them drop substantially before we get to them).

As a side note, the player ranked #129 on this list is Monmouth pitcher Trey Dombroski, who just happens to be the cousin of a group of my cousins. Tall lefty, who dominated the Cape Cod League last summer and he’s off to a great start this year. I would not be mad if the Pirates drafted him this year. Just remember, the last time one of my cousin’s relatives played for the Pirates, he (Dots Miller) helped to Pirates to victory in the 1909 World Series. That’s reason enough to draft Dombroski if you ask me (no one did). Here’s his report from the link. 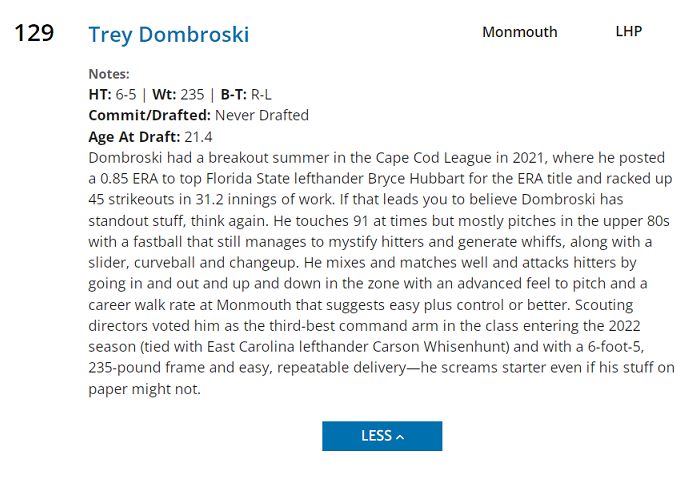 Right. Honestly I see a lot of Judge in him.…