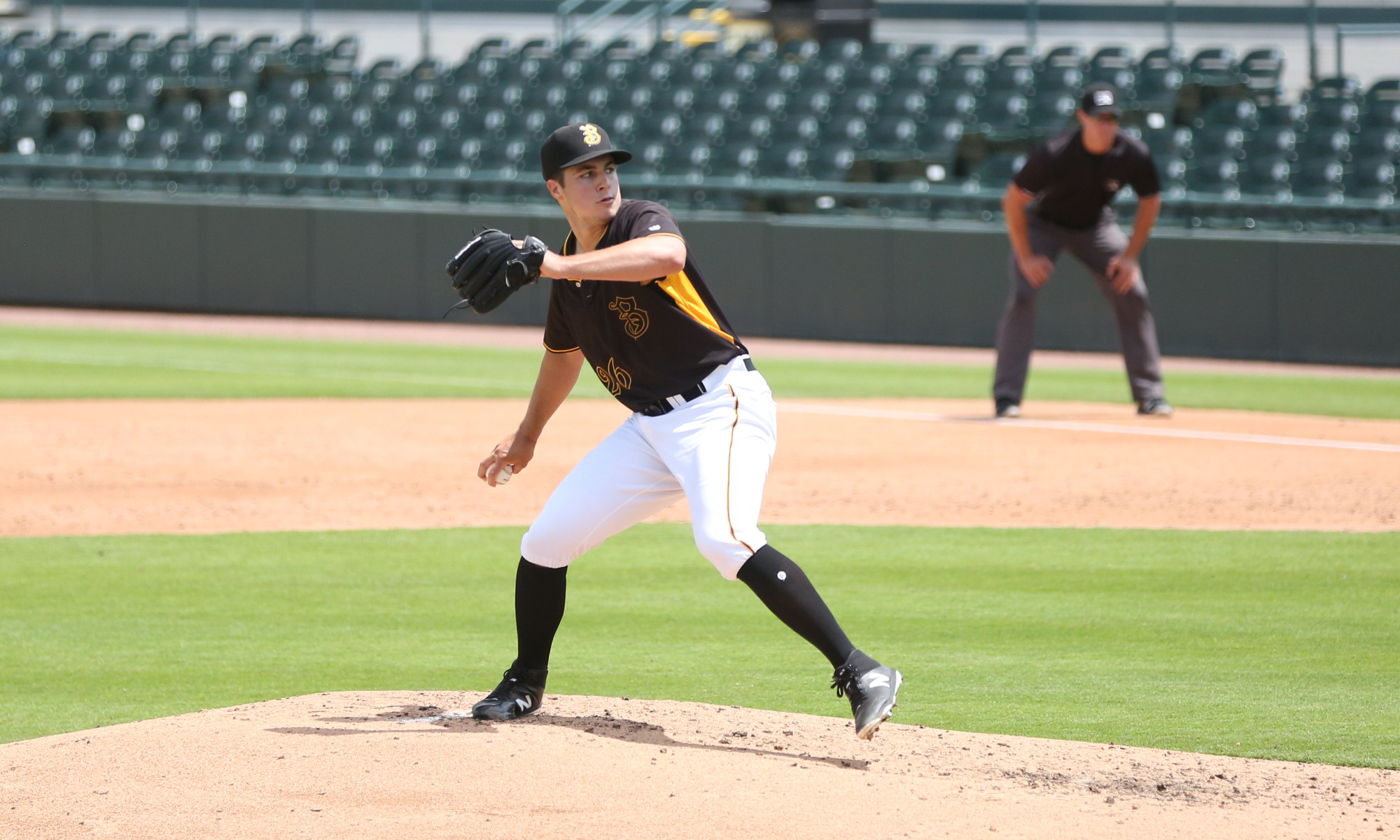 Just for fun, this was Indianapolis’ starting lineup in its 2021 opener:

In addition to the starters, Dustin Fowler and Troy Stokes, Jr., got into the game as pinch hitters and Geoff Hartlieb, Chasen Shreve and Jandel Gustave appeared in relief.

Of those 14 players, only Sharpe finished the season with the Indians.  Three (Tucker, Alford and Shreve) finished the season with the Pirates.  One (De Jong) finished on the major league injured list.  Two (Swaggerty and Busby) were hurt nearly the whole season, although one came back near the end with Altoona.  Seven (Kramer, Craig, Hudson, Fowler, Stokes, Hartlieb and Gustave) are gone.

Rosters in AAA are always highly transitory, but the 2021 Indians seemed like an extreme case.  The team used 44 pitchers, not counting one position player who pitched.  Of those, 21 appeared in five games or fewer.  And it used 40 position players, of whom 11 appeared in fewer than ten games.  I’m going to try to focus here on the players who are still with the organization and who weren’t just at Indy for rehab or a token game or two.

Indy finished the season 61-67.  Ages at AAA don’t mean a lot because every roster is loaded with veterans, but the Indy hitters were the tenth youngest in the 20-team league, almost exactly the league average.  They were 11th in scoring, just under the average.  That wasn’t so bad considering that the team had a terrible time scoring runs early in the season.  They were 18th in average, 15th in OBP and slugging, and 12th in home runs.  They walked at a little more than the league average rate and struck out slightly more than average.

The Indy pitchers were the seventh youngest, a little under the league average.  They were 11th in ERA, had the 11th lowest WHIP, eighth best walk rate and the third lowest strikeout rate.  The team was 13th in fielding percentage.

The catching was the usual collection of AAA veterans.  Indy started off with Joe Hudson and Andrew Susac, then just before the season signed Christian Bethancourt.  Susac got hurt about a month into the season, so the Pirates acquired Taylor Davis from the Cubs.  Apart from that, Jason Delay, who also spent a little time at Altoona and a lot at the alternate site, caught 11 games.  And Eli Wilson caught the season’s final game.

The closest any of this comes to noteworthy is Bethancourt.  He came with a history of being a good-glove, weak-bat guy, but for some reason he caught only 28 games.  He otherwise served at first, in right and at DH, and he ended up as a lineup anchor.  He posted an .807 OPS, hit 14 home runs and led the team in RBIs.  And when he did catch, he threw out 39% of base stealers.  The most frequent catcher was Hudson, who batted .188 with a .561 OPS.  Davis hit .235 with a .647 OPS.  The Pirates released Hudson with two days left in the season, which is odd.  There’s probably some story behind that, but at least it got Wilson a AAA cameo.  When Jacob Stallings went on the concussion list, the Pirates called up Davis rather than Bethancourt, which doesn’t seem fair.  That happened a couple days before Hudson was released, so . . . .  Anyway, Davis is still on the 40-man roster but is a lock to get removed.

The infield changed constantly.  Craig played the most games at first, with 32.  Deadline acquisition Tucupita Marcano played the most at second with 34.  Hunter Owen was a virtual fixture at third, playing there 73 times.  And Cole Tucker led in appearances at short, with 48.  Altogether, Indy used 11 different players at first, 14 at second, 14 at third and 12 at short.  Lots of guys came and went.  Kramer and T.J. Rivera played a lot at various positions.  Dee Strange-Gordon popped in for a few weeks.  Erik Gonzalez appeared briefly before getting hurt.  Wilmer Difo and Michael Chavis stopped on their way to Pittsburgh.  Ka’ai Tom batted .190 before the Pirates finally gave up, and John Nogowski put up a .758 OPS before being released.

Owen, along with Bethancourt and Bligh Madris, provided lineup mainstays.  He stuck with his all-or-nothing approach, leading the team in dingerz with 20, striking out a ton and batting 235/306/451.  He improved a lot late in the season. He also made a very brief major league debut due to COVID issues.  Owen is 28 now and has one more year before minor league free agency.

Tucker and Marcano, of course, were trying to play their way to the majors, although in different contexts.  Tucker may or may not have been getting his last chance, while Marcano was just acquired for Adam Frazier.  Neither hit well, although Tucker improved toward the end and got his OPS up to .723.  Marcano just didn’t hit, posting a .604 OPS.  Both showed very good plate discipline despite the struggles.

Of the other infielders who remain relevant, Chavis and Phillip Evans got a decent amount of time.  Chavis put up a .951 OPS despite a disquieting BB:K of 6:26.  Evans was in Indy partly on rehab and partly on option.  He didn’t do anything to shore up his position on the roster, batting just 252/333/331.  Finally, organizational guy Ethan Paul, who played mostly at second, put up just a .574 OPS.  He hadn’t previously played above short season ball.

As we saw above, the regular outfield in the early season was supposed to be Swaggerty, Sharpe and, thanks to his early-season struggles in the majors, Alford.  (I’m using “regular” here in the sense of “more often than not.”)  Swaggerty’s injury put an end to that.  The Pirates replaced him by promoting Bligh Madris, who was struggling at Altoona.  Madris didn’t hit well in AAA for a while, either, but had a big August and a good September.  A left-handed hitter, he doesn’t hit LHPs well, but he’s got two years before minor league free agency and could be a solid depth guy.

Alford, as we know, caught fire after starting slowly in Indy.  He ultimately put up a 1.013 OPS in 56 games in AAA, then went back to Pittsburgh and put up an .805 OPS in 38 late-season games.  Even with the horrible start, he was one of the Pirates’ best hitters, if you just go by rate stats.  (Of course, it was the Pirates . . . .)  Somehow he put up the good numbers at both levels with frightening K rates, but I guess we’ll see next year whether this can work over the longer term.

The other most frequent outfielders for Indy were Sharpe and Jared Oliva.  Sharpe struggled, batting just 196/304/322.  Oliva shared center with Sharpe and, to a lesser extent, Alford.  He didn’t have a good year, batting 249/321/364, so his 40-man roster spot could be in jeopardy.

One of the more puzzling developments at Indy was the handling of Fabricio Macias.  He had a big first half at Greensboro, then got jumped all the way to AAA.  It may be counter-intuitive, but a promotion like that often means the team does not consider the player a prospect.  Macias started off very well and was batting .315 in AAA in mid-August when he just stopped playing much.  He finished in a 2-for-29 slide, with his playing time mostly consisting of pinch hitting.

There were pitchers.  Lots of pitchers.  Twenty different pitchers made starts.  Only four, though — James Marvel, Beau Sulser, Steven Wright and Max Kranick — made more than nine.  Wright, the knuckleballer, made a dozen and was released with his ERA at 6.68, which is enough about that.

Marvel and Sulser served as innings eaters, with Marvel finishing second in the league in innings and Sulser fifth.  They both got hit pretty hard and finished with ERAs well over 5.00.  Marvel is now eligible for free agency.

The significant starters at Indy were Kranick and Miguel Yajure, who made nine starts.  And I guess Mitch Keller, who made six.  Kranick shuttled back and forth constantly between Indy and Pittsburgh.  When you add that to the lost 2020 season, his injury problems before that, and the fact that he pitched only three times in AA, it shouldn’t be surprising to hear that he more or less alternated good and bad starts in AAA.  He finished there with a 4.14 ERA and 1.27 WHIP.  League averages were 4.52 and 1.37, so he did pretty well considering all the circumstances.

Yajure had a 3.08 ERA and 1.05 WHIP in his nine AAA starts, which obviously is good.  Most of those starts came after he missed over half the season with an elbow strain.  He also reportedly was dealing with back soreness, which could be why his velocity was down when he returned to the majors late in the season.  Basically, nothing happened that should prevent him from being a favorite to win a 2022 rotation spot.

Two pitchers made eight starts apiece while trying to establish their prospect-ness.  Cody Ponce spent half the season in the majors.  He had a 4.71 ERA for Indy, although he probably pitched a little better than that, judging by his walk (2.8) and K (9.3) rates, and his WHIP (1.27).  He had a lot more trouble in the majors.  Lefty Cam Vieaux did the same thing he did back in 2019, pitching well in AA and getting torched in AAA.

The bullpen similarly was divided between a few pitchers who appeared in a lot of games and a much larger number who were just passing through.  Not counting pitchers who got traded (Braeden Ogle and Jandel Gustave), the bullpen stalwarts were Tyler Bashlor, Joe Jacques, Matt Eckelman, Blake Weiman and Shea Spitzbarth.

Bashlor and Spitzbarth were probably the team’s best relievers.  Bashlor had a 2.39 ERA and 10.8 K/9, and led the team in saves (well, with six).  The Pirates removed him from the 40-man roster at the start of the season and, with the multitude of pitchers they went through, never called him up, so they must not have been overly impressed.  He’ll be a minor league free agent in November.  Spitzbarth did get called up.  He had a 2.12 ERA, but his strikeout and walk rates were mediocre, which probably had a lot to do with his xFIP being 4.99.

Jacques and Weiman were the two left-handers after Ogle was traded.  Jacques is an extreme submarine guy.  He was good most of the time, but had a couple bad stretches that left him with a 4.31 ERA.  It won’t help him that the LOOGY era is apparently over.  Weiman is a finesse pitcher who put up good numbers except for one problem:  gopher balls.  That led to a 4.76 ERA.

Eckelman was the reliever who got called upon when the starter exited early.  He got hit hard and had a 4.91 ERA.

As you’d expect with a parent team that was next-to-last in its league in staff ERA, Indy had a number of relievers riding the AAA shuttle.  Nick Mears had a 5.30 ERA in 17 games, but all except one of the earned runs he allowed came in three bad outings.  He fanned over 12 batters per nine innings and the Pirates took an extended look at him late in the season, so they at least seem to believe in the stuff.  Kyle Keller was dominant in AAA, fanning over 15 per nine.  He was terrible in the majors, giving up runs in 16 of 32 games.  Shelby Miller fanned over 14 batters per nine in ten AAA games (one start), but was far less effective in the majors.

Indy added Keury Mella and Hunter Stratton late in the season.  Mella was a fill-in who put up a 7.11 ERA and is now a free agent.  Stratton had a 15.6 K/9 at Altoona.  He wasn’t as dominant in 18 games with Indy, but had a 3.42 ERA.  He’s eligible for the Rule 5 draft.  Another Altoona reliever, Yerry De Los Santos, missed much of the season, but came up to Indy in time for four scoreless outings.  He’ll be a minor league free agent in a couple weeks if the Pirates don’t add him to the roster.