Adrian Florencio is the Pirates Prospects 2021 Pitcher of the Year 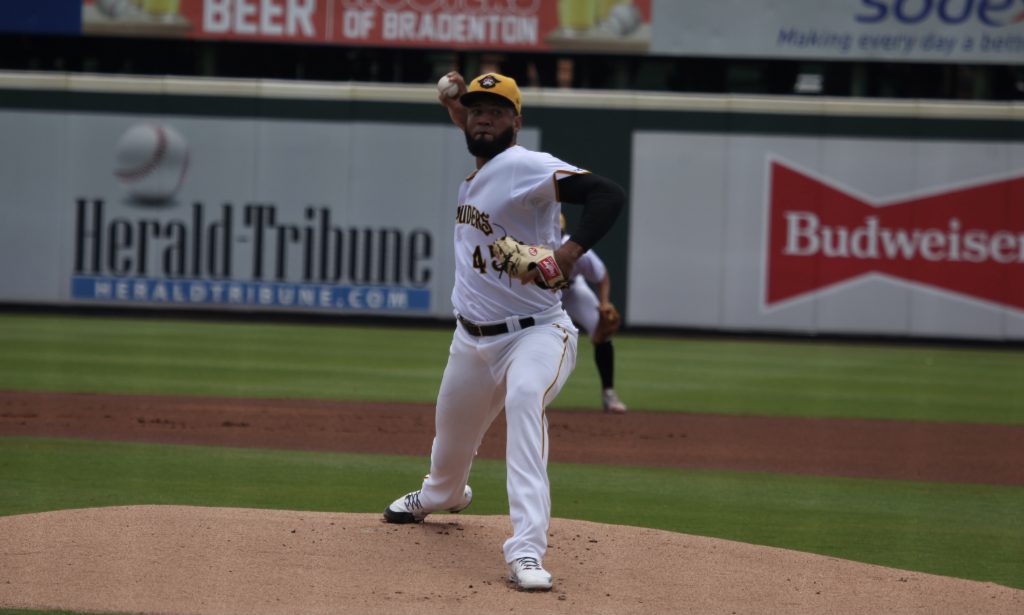 Among Pirates minor league pitchers who threw at least 60 innings (0.5 per game), he finished second in ERA, first in WHIP and sixth in strikeouts per nine innings. He was eighth in innings pitched, but he finished first among all Pirates with 117 strikeouts. All of those things led to Florencio being named as our Pirates Prospects 2021 Pitcher of the Year.

Florencio was a hidden gem from the 2018-19 international signing class, inking his deal well into the signing period when he was already 20 years old. He was still raw at that point. Here’s the scouting report that I received on the day that he signed:

Florencio has a ton of projection left. He’s got a wide frame, so at 6’6″, we could see him pack on some good weight, especially adding lower body strength. He currently throws 88-91, with a workable slider.

The Pirates sped up his progress by skipping him over the two lowest levels of the minors to Bristol for his pro debut. We had an in-depth article covering the Bristol pitching rotation, highlighting how it was a group of pitchers with potential upside. In that article his scouting report updated to the following:

The Pirates noted that he had a lot of filling out to do, especially in the lower half, which could help him see some extra velocity. He was 88-91 MPH when he signed and now he is 91-93, touching 94 MPH. His slider is starting to come along and he has a nice changeup.

We had a great quote from then-pitching coach Eric Minshall as well:

“He’s developing rapidly right in front of our eyes,” Minshall said in 2019. “He’s learning to use his fastball. It has really good tilt because he’s so tall, which help gets him some strike calls down in the zone. He also gets a lot of ground ball outs and he’s commanding his fastball to both sides of the plate. He’s learned to throw his changeup off of his fastball, getting a lot of movement on the pitch, which results in a lot of swing-and-miss. It’s getting results against both lefties and righties. He went from a big bodied athlete with tools to someone who learned how to pitch with those tools.”

The 2020 season was difficult for everyone who basically had to train on their own. Players were given workouts and were able to talk to their coaches. Video was usually part of the process, but it was all training and no game action, unless you were one of the players fortunate enough to join the Alternate Training Site.

Not everyone returned in 2021 as the players we saw in 2019. Some improved greatly, others regressed. Florencio would obviously be in the improved group. He now throws four pitches, adding a curve that has a sharp 11-to-5 break and sits mid-80s. His slider is tight and just a tick slower than the curve. The fastball is more consistently in the 93-94 range, touching higher. He’s more of a control pitcher than command, but he mixes things up well and throws enough strikes with all three of his pitches to be very effective.

Florencio was consistently solid all season, with his worst outing being four earned runs over five innings on July 10th. He finished strong, with a 2.25 ERA in his final ten starts, which included his three highest strikeout games of the season. In the playoffs, he allowed one run over six innings.

Florencio led the league in strikeouts, and if he got another out at some point during the season, he would have led the league in ERA, WHIP and BAA. That’s how good Florencio was this year. He should start next season in Greensboro, and could reach Altoona by the end of the year.