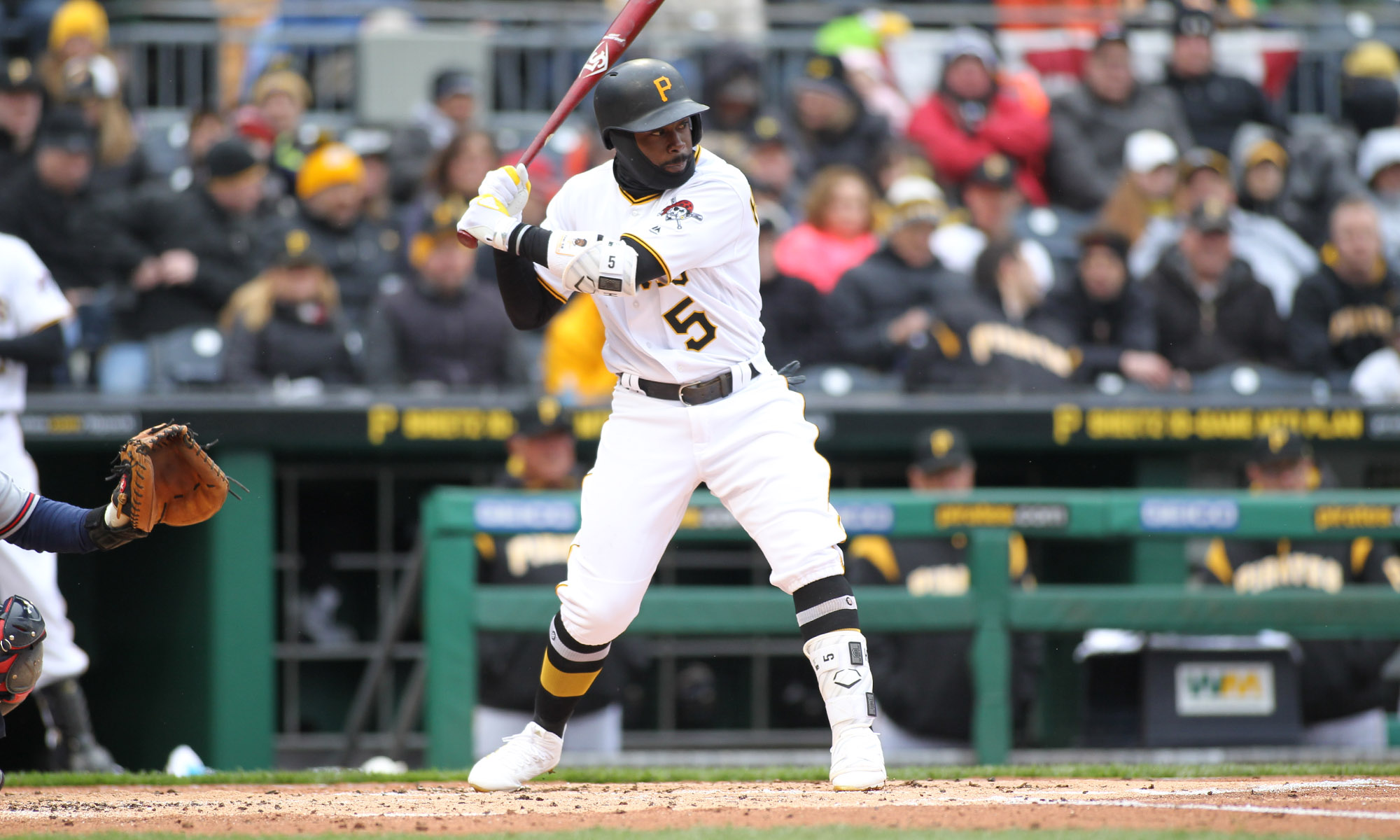 Josh Harrison, infielder for the 2011-18 Pirates. He was drafted by the Chicago Cubs in the sixth round of the 2008 draft out of the University of Cincinnati. The Pirates acquired him as a minor leaguer in July 2009 five-player trade for Tom Gorzelanny and John Grabow. Harrison debuted with the Pirates in 2011 and hit .272 in 65 games as a rookie. He was with the Pirates for all of 2012 and hit .233 in 104 games, while seeing time at six different positions. He split 2013 between the majors and Triple-A, getting 95 plate appearances in 60 big league games. Harrison had a breakout season in 2014 in which he made the All-Star team and finished ninth in the NL MVP voting. He batted .315, with 38 doubles, seven triples, 13 homers and 18 stolen bases, while scoring 77 runs. He started games at five positions, including 20+ starts at third base, right field and left field.

John Bowker, outfielder/first baseman for the 2010-11 Pirates. Bowker was a third round pick in the 2004 draft by the Giants. He made it to the majors in 2008 with San Francisco, hitting .255 with ten homers and 43 RBIs in 111 games as a rookie. He began 2009 in the minors, getting called up two different times (July/September) for a total of 31 games with a .194 average, two homers and seven RBIs. He made the Giants Opening Day roster in 2010, playing 41 games with a .207 average, three homers and eight RBIs, before being sent down in the beginning of June. The Pirates acquired Bowker at the trading deadline, along with pitcher Joe Martinez, in exchange for Javier Lopez. The Pirates sent him to Triple-A, where he hit .319 in 25 games, earning a September call-up. He spent most of 2011 in Triple-A, where he batted .306 with 15 homers and 76 RBIs in 106 games. He played 19 games for the Pirates in April, all as a pinch-hitter. At the end of August, Bowker was sold to the Phillies. After being released in January of 2012, he signed to play in Japan, where he stayed until 2014. He was with the Pirates again in 2015, though he spent the year in Triple-A and retired after the season. Bowker hit .233 with two homers and 15 RBIs in 45 games for the Pirates.

Rosario Rodriguez, pitcher for the 1991 Pirates. He was a lefty reliever the Pirates acquired off waivers in December of 1990 from the Cincinnati Reds. Rodriguez signed with Cincinnati in 1987 and made the majors in 1989, shortly after his 20th birthday. In parts of two seasons with the Reds, he went 1-1, 5.52 in 16 relief appearances. Rodriguez spent most of 1991 in Triple-A for the Pirates, where he made 48 relief appearances, pitching a total of 51 innings. He was called up in late August and used often, making 18 appearances, with a 1-1, 4.11 record and six saves in 15.1 innings. Rodriguez pitched once in the postseason, allowing three runs in his only inning of work. He missed most of the 1992 season due to injury and was a non-roster invitee to Spring Training in 1993, but didn’t make the roster. He started pitching in his home country of Mexico after being let go by the Pirates, and he last pitched pro ball in 2005.

Bob Kipper, pitcher for the 1985-91 Pirates. He was a first round draft pick in 1982 of the Angels, taken eighth overall. He reached the majors by age 20, making the Angels 1985 Opening Day roster, although he was sent back to the minors after just two appearances. On August 16, 1985, the Pirates acquired Kipper as the player to be named later in a six-player deal made two weeks earlier. After pitching five games for the 1985 Pirates, Kipper made the 1986 Opening Day roster. He made 19 starts, going 6-8, 4.03 in 114 innings. Both his win total and innings pitched that season would end up being his career highs. He started 20 times in 1987, while also making four relief appearances. He went 5-9, 5.94 in 110.2 innings, and he had the best outing of his career that year. On April 16th, he threw a four-hit shutout against the Cubs, striking out eight batters.

In 1988, Kipper was moved to the bullpen, a role he would fill for the next four seasons in Pittsburgh. In 1989, he had a career high 52 appearances, posting a 2.93 ERA with four saves in 83 innings. After finishing the 1990 season with a 5-2, 3.02 record and three saves in 41 games, he had a down year in 1991. He had his highest ERA (4.65) in the bullpen role, pitching 60 innings over 52 appearances. In the playoffs, Kipper pitched two innings in the game three loss to the Braves, allowing one run. After the season, he was released, signing with the Twins as a free agent. He missed the entire 1993 season with a tear in his throwing shoulder, then attempted a comeback with the Mets in 1994 that lasted just seven games before he retired. With the Pirates, Kipper was 24-33, 4.22 in 244 games, 44 as a starter.

John Powers, outfielder for the 1955-58 Pirates. He was originally signed by the Red Sox in 1949, but just a year later he was acquired by the Pirates. He played that first season in the Pittsburgh organization with Waco of the Big State League, where he hit .311 with 39 homers in 144 games. Powers moved up a level to Charleston in 1951, batting .255 that year with 17 homers in 139 games. He spent the next two seasons serving in the military, returning to baseball in 1954. For the Pirates, he was a September call-up in both 1955 and 1956, playing a total of 13 games. He made the Pirates Opening Day roster in 1957, but was sent down to the minors in May. Powers was again called up in September and then finally spent the entire season in the majors in 1958, hitting .183 with two RBIs, both coming on solo homers. He played 57 games that year, just 12 as a starter. On January 30, 1959, the Pirates traded Powers and three other players to the Reds for Smoky Burgess, Harvey Haddix and Don Hoak. He played 43 games for the 1959 Reds, then split the 1960 season between the Indians and Orioles, before returning to the minors for five more years. Powers was a .270 hitter in 1,534 minor league games, hitting 298 homers. He batted .190 with four homers in 90 games for the Pirates.

Jay Parker, pitcher for the Pirates on September 27, 1899. In his Major League debut, Jay Parker started the second game of a doubleheader against the Chicago Orphans (Cubs) after the Pirates lost the opener game by a 4-1 score. Rookie pitcher Chummy Gray, pitched a complete game in the first game and Parker was set to make his debut in the second game. Parker was so erratic against the first two batters he faced that he was pulled right away and Gray went in the finish the second game. Parker walked both batters and they both came around to score, leaving him with the “inf” designation for his ERA (stands for infinite). He played and managed a few seasons in the minors but his Major League career was done after his one start, which was over almost as soon as it began. His brother Doc Parker was a pitcher in the majors for four partial season. Doc’s last start was almost as bad as his brother’s only game. On June 21, 1901, he threw a complete game for the Reds against Brooklyn, giving up 21 runs on 26 hits, facing 51 batters without a strikeout.

Harry Gilbert, second baseman for the Pittsburgh Alleghenys on June 23, 1890. The 1890 Pittsburgh Alleghenys were the worst team in franchise history and that led to some interesting stats and happenings during that season. One such instance was Harry Gilbert, a semi-pro player from Pottsville, PA. manning second base alongside his double play partner and older brother, John Gilbert. Neither had played in the majors prior to June 23, 1890 and neither would play in the majors after that day either. The Alleghenys had a doubleheader that day against the Philadelphia Phillies and the Gilberts played both games. The Phillies won the opener 11-0, but Pittsburgh took the second game by a 12-8 score, just their 13th win of the season. Harry Gilbert went 2-for-8 at the plate, with two singles and one run scored. Both he and his brother played flawless defense that day, each turning one double play.

Hank O’Day, pitcher for the 1885 Pittsburgh Alleghenys. As a rookie for the Toledo Blue Stockings of the American Association in 1884, O’Day pitched 326.1 innings, making 40 starts, while losing 28 games. In 1885, the Toledo franchise folded and O’Day hooked on with the Pittsburgh Alleghenys. He was the team’s second starter behind Ed “Cannonball” Morris. O’Day lost five straight games to open the season, while Morris won five of his six starts. O’Day  got plenty of run support from his teammates over the next six games and they won five of them, scoring a total of 64 runs. He made just one more start(an 8-0 loss), before the Alleghenys released him. He finished the year in the minors, pitching for Washington of the Eastern League. The next season O’Day won 26 games in the minors, earning a spot in the National League with Washington. He lost 49 games over the 1887-88 seasons, playing for a team that went 94-162 over that time. In his last season in the majors (1890), he went 22-13 for New York of the Player’s League.

O’Day pitched in the minors during the 1891-93 seasons before retiring as a player. He had a seven-year career as a pitcher in the majors, but he made his name in baseball history as an umpire. He umpired in parts of 35 seasons in the majors and the Veteran’s Committee recognized his accomplishments in 2013 when they voted him into the Hall of Fame. O’Day was an umpire in ten different World Series, including the 1903 WS that involved the Pirates. He also managed for two seasons in the majors.