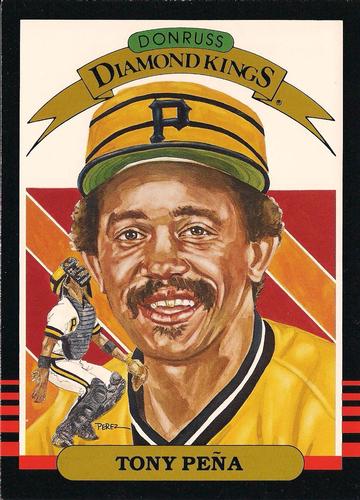 Today’s Card of the Day is from the 1985 Donruss set. Starting in 1982, Donruss would include a Diamond Kings cards in their set, featuring one player from each team. The cards had artwork from Dick Perez, who is a famous artist, with many popular baseball pieces to his credit. The Pittsburgh Pirates were represented by Dave Parker in the 1982 set, followed by Willie Stargell in 1983 and Bill Madlock in 1984. Those cards will be covered here sometime in the future I’m sure, but today we look at the fourth year of Diamond Kings, which featured catcher Tony Pena.

Here’s the card, with artwork from Dick Perez: As you can see, Pena is sporting one of the classic pillbox caps, gold with black stripes and the black P in the middle, along with the matching gold top jersey. Each Diamond Kings card had a portrait shot, with a smaller action shot just off to the side. Pena is shown in full catcher gear, appearing to look up for a pop up as he gets out of his catching stance. It’s the same shot that Donruss used on their Action All-Star set, except that one is the actual photo. The 1985 Donruss borders were black with the red stripes at the bottom, which goes well with the background art for Pena’s card. The black borders make it a tougher set to find in high grade. The back of all of the Diamond King cards had a write-up on the player featured. This particular card sings the praises of the 27-year-old Pena, who batted .286 with 15 homers, 27 doubles, 77 runs scored and 78 RBIs during the 1984 season. He made his second All-Star appearance that year and won his second Gold Glove. Pena threw out 40% of base runners in 1984, well above the league average of 31% that year. That earned him the comment “whose rifle arm puts fear in opposing baserunners”. There was also a prediction that Pena would be a “Diamond King” for many years.

As it turned out, Pena peaked in 1984 with 5.9 WAR. He was still a strong player for a few years, but he never approached that WAR number after his best season. In fact, he had 15.1 WAR career through 1984, and 9.6 WAR total over his final 13 seasons. His 1985/86 seasons provided much of that value, while the other 11 years saw him put up just 2.3 WAR. So he wasn’t quite a Diamond King for many years, but he definitely deserved the honor in the 1985 set.

This card can be found cheap on Ebay. The 1985 Donruss set is difficult for a 1980s set, but not difficult to find overall. Multiple sellers have this card for less than $2, which includes delivery. That’s the same price as Pena’s regular card from the 1985 Donruss set.

Here are the previous Card of the Day articles. Eventually we will have a better way to organize them once we launch Pittsburgh Baseball History, as opposed to just a continuously growing list at the bottom of each article: