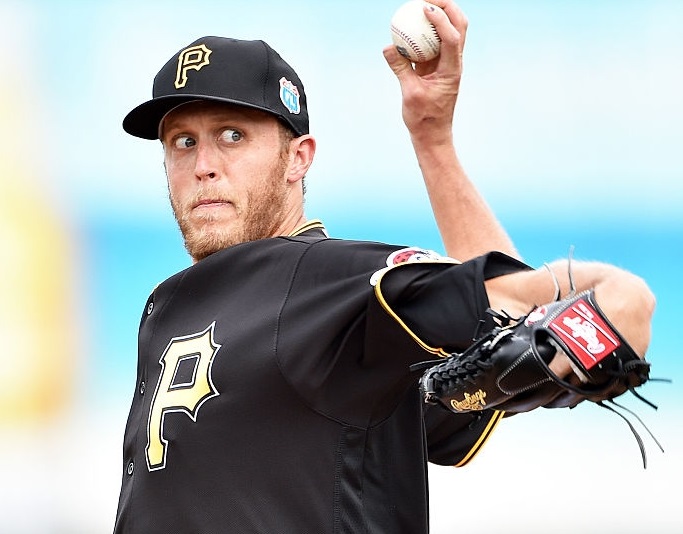 Two former Pittsburgh Pirates pitchers born on this date, as well as one trade to recap and one transaction.

On this date in 1956, the Pirates traded second baseman Curt Roberts and pitcher Jack McMahan to the Kansas City Athletics in exchange for second baseman Spook Jacobs. It took Jacobs eight years to make the majors after he signed his first contract. As a rookie in 1954, he hit .258 with 60 walks and 17 stolen bases in 132 games for the Philadelphia A’s. The team moved to Kansas City the next season and Jacobs spent most of the year in the minors. For the 1956 A’s, the 30-year-old Jacobs was hitting .216 with 15 walks over 32 games at the time of the deal. Roberts had a similar story to Jacobs. He made his Major League debut in 1954 and played 134 games for the Pirates that season. In 1955, he spent most of the year in the minors. At the time of the trade, the 26-year-old second baseman was hitting .177 in 31 games for Pittsburgh. McMahan was a 23-year-old rookie lefty reliever for the 1956 Pirates. He was a Rule 5 draft pick out of the Yankees system, with a 6.08 ERA in 13.1 innings of work over 11 relief appearances.

After the deal, Jacobs started 11 straight games at second base for the Pirates, but after he hit just .162 with four errors, the team decided to go in another direction. He was sent to the minors, where he would spend the rest of his career, retiring after the 1960 season. In his place, the Pirates called up a 19-year-old from the minors to make his Major League debut on July 7, 1956, and he would hang around Pittsburgh until 1972 as a player, eventually making the Hall of Fame. That teenager was Bill Mazeroski. Curt Roberts went right to the minors for the A’s and remained there until 1963, never playing another Major League game. McMahan would pitch 23 games for the A’s, nine as a starter. He pitched better than while he was in Pittsburgh, although he had an 0-5 record to show for it at the end of the year. Just like the other two players, his big league career ended in 1956, spending the next three seasons in the minors, where he only won six games over that time.

On this date in 2014, the Pirates signed right-handed pitcher John Holdzkom, who was pitching in independent ball at the time. He originally signed out of high school with the New York Mets in 2006 and he was limited to 126 innings over his first six seasons in pro ball due to injuries. He pitched briefly in the minors for the Cincinnati Reds in 2012, then in independent ball in 2013, before turning things around in 2014. After signing, Holdzkom reported to Altoona for four games, then pitched 18 times in Indianapolis, before being called up by the Pirates when the rosters expanded in September. He gave up two runs over nine innings and nine appearances, while striking out 14 batters. Holdzkom spent 2015 in the minors, missing time with an injury, then was let go in April of 2016. He pitched one minor league game for the Chicago White Sox that year, then pitched winter ball in Australia in 2018.

Ken Jungels, pitcher for the 1942 Pirates. Prior to joining the Pirates in the 1941 Rule 5 draft, Jungels had spent parts of four seasons with the Cleveland Indians. They were all brief stops with the team, as he had a total of 19 appearances (all in relief) and 35.1 innings pitched. For the 1942 Pirates, he was being used in the mop-up role through the beginning of June. Jungels pitched six times, all in losses, and had a 6.59 ERA in 13.2 innings. Despite the fact he was used just six times over the first two months of the season, three of his appearances came on consecutive days in a series against the Brooklyn Dodgers. His last outing with the Pirates was also against the Dodgers. On June 2nd, he threw five innings during a 17-2 loss. That game was actually only his last game with the team as a pitcher, but five days later he was used as a pinch-runner for the third time that year. On June 10th, the Pirates sold him to Jersey City of the International League. For the 25-year-old Jungels, it marked the end of his Major League career. He would begin serving in the military during WWII in 1943, returning to baseball for the 1946 season. He ended up playing four more seasons in the minors before retiring. Ken finished his five-season Major League career with a perfect 1-0 record.

Bill Harris, pitcher for the 1931-34 Pirates. He had a pro baseball playing career that stretched over 25 seasons, beginning in 1921 and ending in 1945. Harris would win a total of 281 games in his career, but very little of his time was actually spent in the majors. During the 1923-24 seasons, he pitched a total of 25 games for the Reds. It would then take another seven years before he pitched in the majors again, returning with the 1931 Pirates. Despite that long stretch, he actually had a fairly impressive season right in the middle of it, going 25-9 in 1928 for Asheville of the South Atlantic League. Harris had an 11-21 record in the minors in 1931, pitching in the Texas League, where his 2.87 ERA was near league average, but he played most of the year for an anemic offensive club in Galveston. He was a September call-up to Pittsburgh and had an impressive debut, throwing a five-hit shutout over the Reds. Harris followed that up with two more complete games, allowing one run in each game, although he took the loss in his third outing.

In 1932, Harris started 11 games through the end of June, before being moved into a bullpen role that saw him get occasional starts. At one stretch during August, the Pirates went through a rough patch as a team and he ended up pitching ten times (twice as a starter) over 24 days. All of those appearances came during losses. He finished the year with a 10-9, 3.64 record in 168 innings. In 1933, Harris was strictly a reliever, throwing a total of 58.2 innings over 31 outings. His role was great diminished the last two months of the season, making a total of six appearances over that time, with the last four coming during doubleheaders. In fact, on the season, 18 of his games pitched came on days that the Pirates played a doubleheader. By 1934, Harris was strictly in a mop-up role, pitching just 11 times all season for the Pirates, plus he was sent to the minors for part of the year. He made one late season start and pitched a total of 19 innings with Pittsburgh. The Pirates released him in the off-season and he spent the next four years pitching for Buffalo of the American Association. In 1938, he got his last shot at the majors, going to the Boston Red Sox, who gave him 11 starts over the last two months of the season. Harris pitched a total of 83 games with the Pirates, 22 as a starter, with a 16-15, 3.45 record in 276.2 innings.