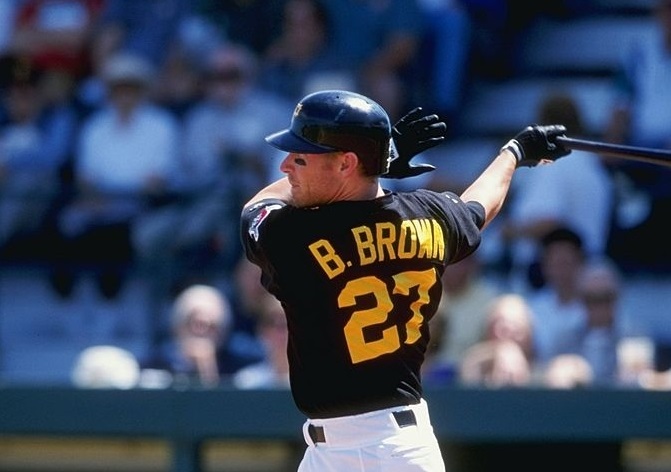 Three former Pittsburgh Pirates players born on this date including a pitcher for the Pirates first World Series team. We also have a transaction of note.

Brant Brown, outfielder for the 1999 Pirates. He was originally a third round pick of the Cubs in the 1992 draft. Brown (pictured up top, photo credit: Harry How/Allsports) made his Major League debut in June of 1996, hitting .304 in 29 games for Chicago that year. He split the next season between Triple-A and the majors, hitting .301 with 16 homers in the minors and .234 with five homers for the Cubs. During his first two seasons, he played more first base than outfield. In 1998, he played his first full season at the Major League level, batting .291 with an .850 OPS in 124 games. On December 14, 1998, the Pirates traded pitcher Jon Lieber to the Cubs in exchange for Brown. He started 85 games for the Pirates in 1999, getting into another 45 off the bench. His numbers fell well off from the previous year, hitting .232, with just 22 walks and 114 strikeouts in 371 at-bats. Almost exactly a year to the date that they acquired him, the Pirates traded Brown to the Florida Marlins for outfielder Bruce Aven. He would spend the next season splitting the year between the Marlins and the Cubs, hitting just .173 in 95 games. That 2000 season would be his last in the majors. He would spend 2001 in Triple-A, then returned to baseball in 2003 for one last season, this time playing independent ball.

Dave Tomlin, left-handed pitcher for the 1983 and 1985 Pirates. He was originally a 27th round draft pick of the Reds in the 1967 amateur draft. It took Tomlin five seasons to reach the majors, getting in three relief appearances in September of 1972. He split the 1973 season between the minors and majors, then got traded to the Padres in the off-season. He spent four seasons in San Diego, pitching a total of 239 games, with a 10-7, 3.28 record and six saves in 315.2 innings. The Reds reacquired him for the 1978 season, then saw him post a 9-1 record despite a 5.78 ERA. He lasted in Cincinnati through September of 1980 when he was released. Tomlin spent all of 1981 in the minors for the Blue Jays, then re-signed with the Reds in April of 1982. His third time with the team lasted less than five months before he was sold to the Expos. He pitched one game in the majors for the Expos that September, allowing one run in two innings.

Tomlin was in Triple-A for the Expos through August of 1983, posting a 4-1, 3.61 record in 41 relief appearances. He contract was sold to the Pirates on August 2, 1983, and he would pitch four innings over five games for Pittsburgh before the year was through. After spending all of 1984 in Triple-A, Tomlin made another appearance for the Pirates on August 9, 1985, during a 7-2 loss to the Expos. He was sent back to the minors, then granted free agency after the season. He pitched one last year in the majors with the 1986 Expos, before ending his career in the minors the next season. Tomlin finished his career with a 25-12 record in 409 games, with 12 saves and a 3.82 ERA. Since retiring as a player, he has been a minor league pitching coach in three different organizations, including 11 seasons with the Red Sox.

Gus Thompson, pitcher for the 1903 Pirates. He played ball at two different colleges before making his pro debut in 1902 for the Helena Senators of the Pacific Northwest League. Thompson is one of just two Major League players who attended Grinnell College in Iowa. He also played for the University of Iowa. In 1903, Helena moved to Class-A ball (one level higher than the prior year), playing in the Pacific National League. Thompson went 13-15 in 31 games, earning a trial with the first place Pirates at the end of the year. The Pirates also signed Fred Carisch, his catcher that season with Helena. Both Thompson and Carisch sat on the Pirates bench for a week and observed the team, before making their debut on August 31st as the starting battery against the St Louis Cardinals. Thompson pitched well in a 9-6 win that saw the Pirates commit four errors behind him, before they made up for the miscues with five runs in the 9th for the win. He would make three more starts and a relief appearance before the season was over, finishing with a 2-2, 3.56 record in 43 innings. That would be his only season with the Pirates, but his last game with the team was during game five of the 1903 World Series, when he pitched the last two innings of a blowout loss.

Thompson returned to the minors in 1904, going 20-17 for the Boise Fruit Pickers of the Pacific National League. He would return to the majors in 1906 with the Cardinals, going 2-11, 4.28 in 12 starts and five relief appearances. The Cardinals as a team went 52-98 in 1906, but Thompson was easily the worst pitcher among the six guys on the team who pitched at least 100 innings. The highest ERA among the rest of that group was 3.02 from Fred Beebe, who had the unfortunate experience of starting that season with the Cubs, a team that won 116 games, before being traded to the lowly Cardinals. Thompson pitched another four seasons in the minors before retiring from baseball. He won 21 games in 1908, then went 26-8 for Seattle of the Northwest League the following season.