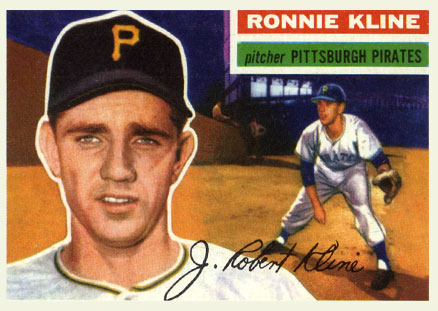 Six former Pittsburgh Pirates players born on this date, plus a trade of note.

On this date in 1969, the Pirates traded pitcher Ron Kline to the San Francisco Giants in exchange for pitcher Joe Gibbon, who had pitched previously for Pittsburgh. Kline began his career with the Pirates, playing six seasons in Pittsburgh before he was dealt to the Cardinals in 1959. In 1969, he was two years into his second stint with the team, then at age 37, with a 1-3, 5.81 record in 20 relief appearances. Gibbon also began his career with six seasons in Pittsburgh, leaving the team for the Giants in the Matty Alou trade made after the 1965 season. Gibbon was 34 years old at the time of the deal, with a 1-3, 3.60 record in 20 innings over 16 relief appearances. Kline was a right-handed pitcher, while Gibbon threw lefty.

After the deal, Kline pitched just seven games for the Giants before they sold him to the Red Sox. He pitched a total of 28 games and 34.1 innings after leaving the Pirates. Gibbon was a solid member of the Pittsburgh bullpen in 1969, going 5-1, 1.93 in 51.1 innings with nine saves. He pitched 41 games in 1970, although his ERA was 4.83 in 41 innings. After the season, he was released. He played two more years in the majors, split between the Reds and Astros, before retiring.

Carlos Rivera, first baseman for the 2003-04 Pirates. He was drafted by the Pirates in the 10th round of the 1996 draft. He hit well enough that first year in rookie ball to move to full season ball in 1997 as a 19-year-old. Rivera spent three seasons in low-A, breaking out in 1999, when he hit .322 with 13 homers and 86 RBIs. He missed half of the 2000 season, then struggled in his first try at Double-A the next year. In 2002, he put himself back on the prospect map, batting .302 with 22 homers and 84 RBIs for Altoona. Rivera began 2003 in Triple-A, getting his first call to the majors in late-June. He would be used mostly off the bench by Pittsburgh, getting into 78 games with only 107 plate appearances. He hit .221 with three homers and ten RBIs. In 2004, he was back in Triple-A, getting a brief recall to the majors in late April. Rivera played seven games for the Pirates before being sent back down, which ended up being his last Major League action. He was released by the Pirates after the season, then signed a minor league deal with the Astros. Carlos was still an active player in the Mexican League up until 2015. He had over 2,500 hits as a pro, almost 1,400 RBIs and 275 homers.

Pokey Reese, second baseman for the 2002-03 Pirates. He was a first round draft pick in 1991 by the Reds and a top prospect in the minors for five years as he worked his way from a High School draft pick to the big leagues. Reese debuted his strong glove and above average speed in the majors on Opening Day in 1997 for the Reds. He was a shortstop by trade, although he was blocked in Cincinnati by Barry Larkin. In 1997, he saw plenty of time at that shortstop position, as Larkin missed most of the second half of the season. He hit just .219 with 25 stolen bases in 128 games. The next year, Pokey played 56 games for the Reds, most of them spent at third base. He would break through in 1999 as the everyday second baseman. He hit .285, stole 38 bases and won the Gold Glove.

After winning another Gold Glove in 2000, Pokey’s hitting began to drop off and Cincinnati traded him in the off-season, setting off a strange string of events. He was dealt to the Rockies in mid-December, who traded him to the Red Sox the next day, only to get released two days later. Reese signed with the Pirates in January 2002 and became the team’s starting second baseman. He would hit .264 with 50 RBIs in 119 games that year, while playing Gold Glove caliber defense. He played just 37 games for the Pirates in 2003 before a thumb injury, similar to one he had in 1998, put him out for the season. He left the Pirates via free agency, then signed with the Red Sox, where he was a member of their 2004 World Series winning team. That would be his last season in the majors. He finished his career in the minors in 2008.

Hank Foiles, catcher for the Pirates from 1956 until 1959. He was signed by the Yankees out of High School in 1947, but didn’t make the majors until 1953 ,and wasn’t a regular until the 1955 season. Foiles made his big league debut in 1953 with the Reds, who had acquired him in the Rule 5 draft. After just a couple weeks, he was sold to the Cleveland Indians, playing seven games there before returning to the minors for the rest of the 1953 season and all of 1954. He hit .261 in limited at-bats over 62 games in 1955. After playing one game over the first month of 1956, the Pirates acquired him for Preston Ward, who Pittsburgh had acquired in the Ralph Kiner trade.

Foiles didn’t hit much that first year, but played good defense, with a strong arm. In 1957, his defense, plus a .270 average in 109 games, got him elected to his only All-Star team. His average dropped to .205 in 1958, though his defense kept him in the lineup, led by a league leading 50% caught stealing rate, with only 34 runners testing him all year. He was a backup in 1959, then was traded to the Kansas City A’s in the off-season. The Pirates reacquired him in June of 1960, but it was for just one day, as he was sent back to Cleveland for outfielder John Powers the next day. Foiles played until 1964, finishing his career with a .243 average in 608 games. He hit .230 with 27 homers and 95 RBIs in 345 games for the Pirates.

Johnny Podgajny, pitcher for the 1943 Pirates. He pitched two seasons in the low minors for the Phillies, going 18-7, 2.57 in class-C ball in 1940, before getting his first call to the majors. He made four September starts for Philadelphia that season, then was a regular in their rotation the next two seasons. In 1943, he was splitting his time between starting and relieving, when the Pirates traded pitcher Dutch Dietz to get him in mid-June. Podgajny had a 20-33, 4.14 career record at the time of the deal. For the Pirates that season, he went 0-4, 4.72 in five starts and ten relief appearances, losing each of his first four starts. At the end of the season, He would be dealt to the Cardinals in exchange for pitcher Preacher Roe. Podgajny would pitch just six more Major League games, all in 1946 for the Indians, before finishing his career in the minors four years later. He compiled 104 minor league wins, but never won in the majors after the Phillies traded him.

Danny MacFayden, pitcher for the 1940 Pirates. He never played a day in the minors, going right from Prep School and Summer League ball, to the majors with the 1926 Red Sox. He pitched for Boston until June of 1932, going 52-78, 4.23 in 185 games before he was dealt to the Yankees. MacFayden had a 1-10, 5.10 record at the time, but the Red Sox were still able to get two players and a large amount of cash from the Yankees in the deal. He pitched in New York until 1934, before getting sold to the Reds in the off-season. Cincinnati let him go less than two months into the season, sending him back to the Yankees, who put him on waivers, where he was picked up by the Boston Braves. MacFayden made a name for himself there, winning 48 games from 1936 to 1938, with an ERA under 3.00 each season. After a down year in 1939, the Pirates sent pitcher Bill Swift and cash to acquire him from Boston. MacFayden made eight starts and 27 relief appearances for the 1940 Pirates, going 5-4, 3.55 in 91.1 innings. He was released after the season and would pitch just 15 more Major League games, five for the 1941 Senators and ten for the Braves in 1943, before retiring. He had a 132-159 career record in 465 games, 334 as a starter.

Jap Barbeau, third baseman for the 1909 Pirates. When he joined the Pirates prior to the 1909 season, Barbeau had played 53 Major League games, although his last two full seasons were spent in the minors. He played for the Cleveland Naps during the 1905-06 seasons, hitting .211 in 166 at-bats. He was a shortstop for Toledo of the American Association during those next two years in the minors, hitting .295 and .282 during those seasons. He was known more for his glove and the Pirates signed him to play third base, as shortstop was manned at the time by Honus Wagner. Barbeau was described as a weak hitter, standing just 5’5″, 140 pounds, and his Major League stats prove that fact, as he hit .225 in 199 games with no homers. He was able to hit his share of homers in the minors, hitting 11 one season for Kansas City, no small feat during the deadball era. Playing out of position for the 1909 Pirates, Barbeau struggled at the plate and in the field, hitting .220 in 91 games with 29 errors. In mid-August, as the team geared up for their playoff run, Jap (first name was William) was traded to the St Louis Cardinals, along with Alan Storke, for Bobby Byrne, a strong fielding third baseman. Barbeau played with St Louis through May of 1910, before returning to the minors for good, playing another ten seasons.