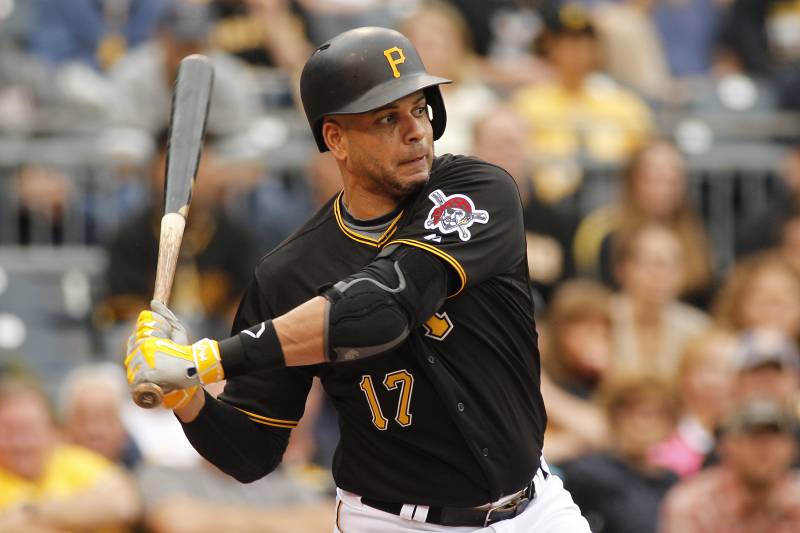 Seven former Pittsburgh Pirates players born on this date and one quick transaction of note at the bottom.

Aramis Ramirez, third baseman for the 1998-2003 and 2015 Pirates. He was signed as an amateur free agent at age 16 in 1994 out of the Dominican Republic. Ramirez worked his way to the majors by May of 1998, although he didn’t spend his first full season in the majors until 2001. That first full year in Pittsburgh was a big one though. After hitting .239 with 12 homers and 66 RBIs in 163 games those first three years, Ramirez exploded for a .300 average with 40 doubles, 34 homers and 112 RBIs. The next year his stats really dipped, going down to a .234 average (only 29 walks as well) with 18 homers and 71 RBIs in 142 games. Through 96 games in 2003, Ramirez was batting .280 with 12 homers and a league leading 23 errors. The Pirates dealt him at the trading deadline to the Cubs, along with Kenny Lofton. It was a salary dump that netted the Pirates a half season from Jose Hernandez and 185 games from infielder Bobby Hill. Ramirez ended up playing nine years with the Cubs, batting .294 with 239 homers and 806 RBIs in 1,124 games. He became a free agent at the conclusion of the 2011 seasons, signing with the Brewers through 2014, with a 2015 option.

Bobby LaFromboise, pitcher for the 2014-15 Pirates. He debuted with the Seattle Mariners during the 2013 season, making ten appearances, with a 5.91 ERA in 10.2 innings. He signed with the Mariners as an eighth round pick in 2008. It was the third time that he was drafted. He was picked up off of waivers by the San Diego Padres, though he never pitched for them in the majors. He was in the minors when the Pirates acquired him via waivers in August of 2014. Lafromboise made six appearances for the 2014 Pirates, allowing one run in 3.2 innings. He spent part of 2015 with them as well, giving up one run over eight innings and 11 appearances. That ended up being his last big league time. He played minor league ball until 2017 before retiring.

Alejandro Pena, pitcher for the 1994 Pirates. He played 15 seasons in the majors, pitching a total of 503 games. The Pirates signed him in December of 1992 after he had 15 saves and a 4.07 ERA in 41 appearances for the Atlanta Braves. Unfortunately for Pittsburgh, before Pena could even pitch a Spring Training game, he had to have elbow surgery, which cost him the entire 1993 season. He returned in 1994 and went 3-2, 5.02 in 22 games with seven saves. Pena was released on June 30, 1994 and didn’t sign with another team until April of the following year, partially due to the strike. He would go on to pitch for three teams during the shortened 1995 season, before finishing his career with the Marlins the following year. He won 56 games, saved 74 and had a 3.11 ERA over 1,057.2 innings during his career. He was a starting pitcher early on with the Dodgers, winning 24 games with seven shutouts between the 1983-84 seasons. The following year he missed most of the season with shoulder and abdominal issues, which forced an eventual move to the bullpen.

John Gelnar, pitcher for the 1964 and 1967 Pirates. The Pirates signed him out of the University of Oklahoma in 1963, sending him to Asheville of the South Atlantic League, where he went 12-5, 3.04 in 27 starts. The Pirates jumped him up the system quickly in 1964, getting nine starts between Double-A/Triple-A before reaching the majors in early August. He was used seven times in relief over the rest of the season, pitching a total of nine innings. Gelnar would return to the minors in 1965, where he pitched the next four seasons for Triple-A Columbus. He made 100 starts during the 1965-68 seasons, going 41-30 with an ERA of 3.54 or less every year. The Pirates only called him up once during that stretch, giving him one start and nine relief appearances in 1967. He went 0-1, 8.05 in 19 innings for Pittsburgh that year. Gelnar was sold to the Royals after the 1968 season. He pitched parts of three years in the majors, including 39 games for the Seattle Pilots during that team’s only season (1969), and then 53 games the next year as the franchise moved to Milwaukee. He finished his career in the minors in 1972.

Ralph Erickson, left-handed pitcher for the 1929-30 Pirates. He was a college pitching star for Idaho State, the only Major Leaguer ever that attended that college. Erickson joined pro ball in 1927, pitching for Pocatello of the Utah-Idaho League, where he did not pitch well in his brief time. He remained in the league the next year, switching teams to play for the Boise Senators, where he went 8-5 and pitched 110 innings. Erickson was signed by the Pirates on September 15, 1928, but didn’t pitch for the team that season. Pittsburgh sent him to the South Atlantic League to play for Columbia in 1929. He went 16-15, 3.24 in 258 innings, earning a look from the Pirates in September. He made his debut on September 11, 1929, pitching one inning in relief, allowing three runs. It would end up being his only big league appearance that season. The next year he remained with the team through the middle of May, making seven more appearances out of the bullpen. He pitched a total of 14 innings, allowing 21 hits, ten walks and 11 runs. Erickson pitched in the minors until 1934 without making it back to the big leagues. He won 82 minor league games and finished with a 1-0 Major League record. He passed away at the age of 100, just two days after his birthday.

Bill Webb, infielder for the 1917 Pirates. He began his career in the minors in 1916, playing for Duluth of the Northern League. The next year he moved up to Class-A ball, spending the season with Birmingham of the Southern Association. He hit .279 in 132 games with 31 extra-base hits. Four players from that Birmingham team all joined the Pirates after their season ended. Besides Webb, the groups also included infielder Howdy Caton, pitcher Elmer Ponder and catcher Red Smith. Webb made his Pirates debut on September 17, 1917 (as did Caton and Smith), going 0-for-4 while playing second base. He went 3-for-15 with two walks and a run scored in his five games that season for the Pirates. He played four games at second base and one at shortstop. He spent the entire 1918 season serving in the Navy during WWI. Webb returned to the minors in 1919, playing until 1930 without making it back to the big leagues. He finished his career managing in the minors for six seasons, the first three as a player/manager.

On this date in 1981, the Pirates signed infielder Denny Gonzalez as an amateur free agent out of the Dominican Republic. He would spend parts of four seasons with the Pirates (1984-85 and 1987-88) before being traded to the Cleveland Indians for Jay Bell. You can read more about Gonzalez in our Obscure Pittsburgh Pirates feature.