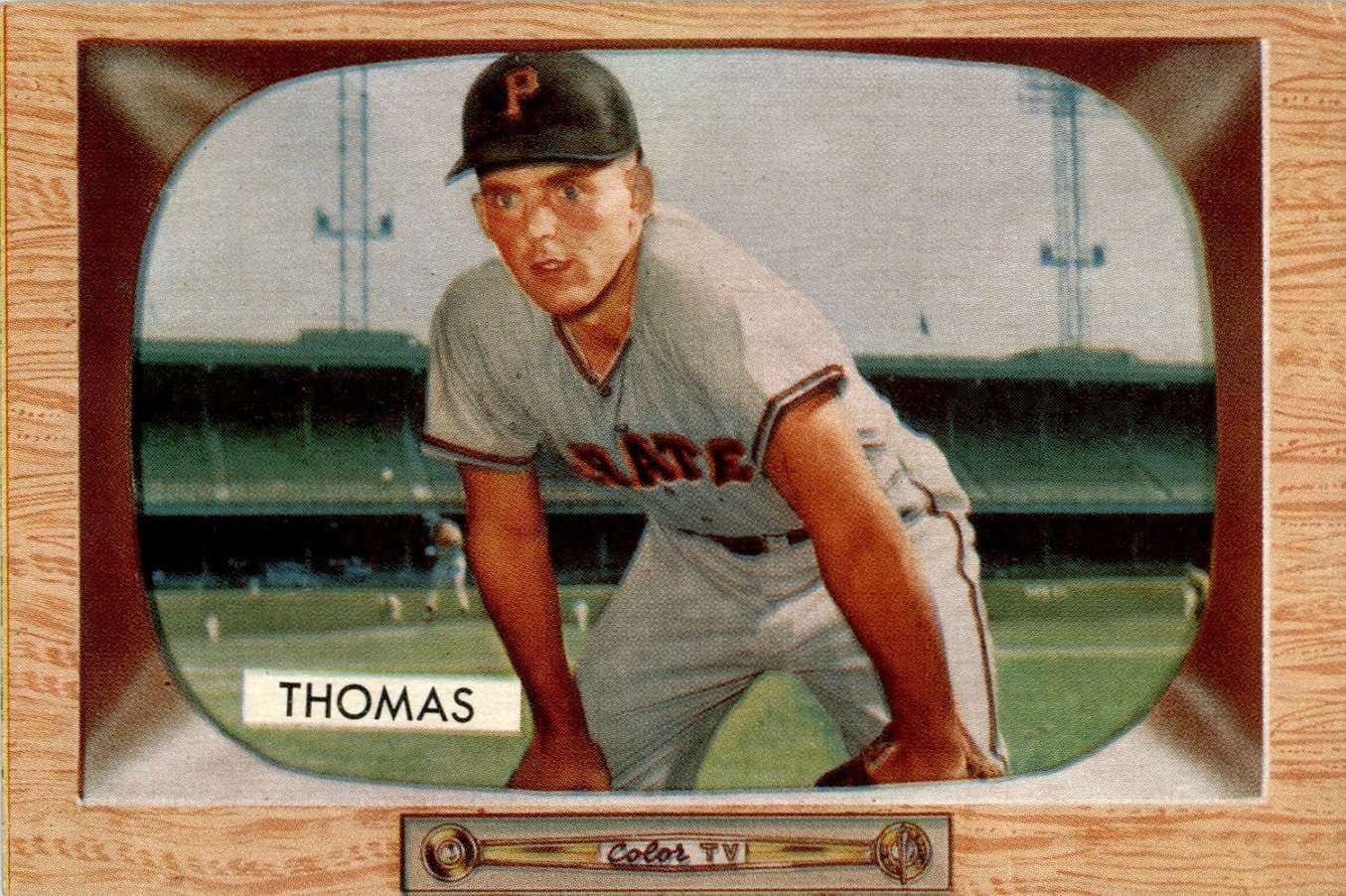 When most baseball fans see the name Frank Thomas, they think of the Hall of Fame 1B/DH for the Chicago White Sox. Before the Big Hurt came on the scene, the Pittsburgh Pirates had their own Frank Thomas hitting home runs. The original Frank Thomas slugged 163 homers with the Pirates from 1951 until 1958, including 23+ a year during his last six seasons in Pittsburgh. Today’s Card of the Day features the man who was second only to Ralph Kiner on the Pirates all-time home run list when he left Pittsburgh.

The 1955 Bowman set featured one of my favorite old designs. The players were shown inside a television set, with a wood grain border and the words “color TV” at the bottom. We are talking about 1955 here, and with these cards being produced months before the Major League season started, color TV broadcasts were barely a year old when this set was first released. Thomas is leaning over, hands on his knees and what appears to be a glove on his left hand. He has an intense look on his face, which was probably a bit intimidating to pitchers, back when he was coming off of his first All-Star appearance in 1954, hitting .298 with 23 homers. One of my favorite things here is seeing the story on the back of this card, as Thomas talks about his biggest thrill in baseball. He talks about hitting a grand slam with his parents in the crowd to win a game 6-5. The home run happened April 23, 1953 and was a little bit different than the story makes it sound.

When I initially read that, it appears to suggest that he hit a walk-off grand slam. The home run actually came in the third inning that day and it gave the Pirates a 5-0 lead at the time. A grand slam is big in a one-run win regardless, especially for a 23-year-old with his parents in the crowd, but it played out quite different than that story. What makes it a bit more interesting is that seven days later, he hit a walk-off homer in the ninth against the Chicago Cubs for a 4-2 win. It was his second home run of the season and was probably quite the thrill.

As you can see from the card, Thomas was born on June 11, 1929 in Pittsburgh, PA. He’s still living and about to celebrate his 91st birthday at the time of this writing. That makes him the tenth oldest living former Pittsburgh Pirates player. Hank Foiles, who was a teammate of Thomas during the 1956-58 seasons, is one day older.

This card can be had on Ebay for less than $10 delivered in nice condition. You can get it for as low as $5 if condition doesn’t matter. If you want one of the nicest condition ones in existence, there’s a PSA 9 (10 means the card is flawless) for $338 on Ebay right now. That’s $279 more than a PSA 8, which looks almost as nice.