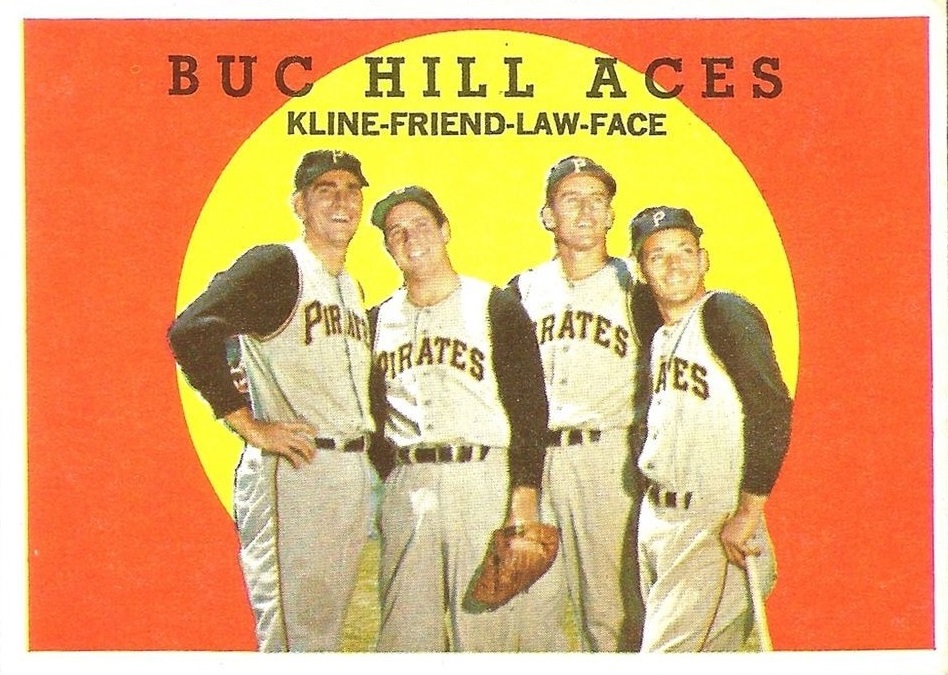 Today’s featured Pittsburgh Pirates Card of the Day comes from the 1959 Topps set and pictures four pitchers from the 1959 Pirates. The “Buc Hill Aces” as they were dubbed, consisted of right-handed pitchers Ron Kline, Bob Friend, Vern Law and Roy Face.

Back during this time, Topps had a lot of combo cards showing players from the same teams. Those cards included such great cards as the “Keystone Combo” featuring Hall of Famers Nellie Fox and Luis Aparicio of the White Sox, as well as the “Fence Busters” showing Hank Aaron and Eddie Mathews of the Braves. They also had an “Ace Hurlers” card picturing Robin Roberts of the Phillies and Billy Pierce of the White Sox, so not all of them were teammates. The Pirates had two such cards in the set, one showing their outfielder trio, which I will feature here some day I’m sure, and this card with four of their top pitchers.

Law was two seasons away from winning the Cy Young award in 1958. He went 14-12, 3.96 in 202.1 innings. It was his seventh season in the majors and he set career highs in wins and innings. He would top both of those numbers in each of the following two seasons.

Face had the lowest ERA of the group at 2.89, though he was far from the best pitcher on the 1958 Pirates. That honor went to starter Red Witt, who posted an outstanding 1.61 ERA in 106 innings over 15 starts and three relief appearances. Face made 57 appearances that season and threw 84 innings. He had a 5-2 record with 20 saves, though saves were not an official stat at the time. Here’s the back of the card, which I enlarged because it has a lot of writing: