Morning Report: A Look Back at the Top Ten Prospects for the 2016 GCL Pirates 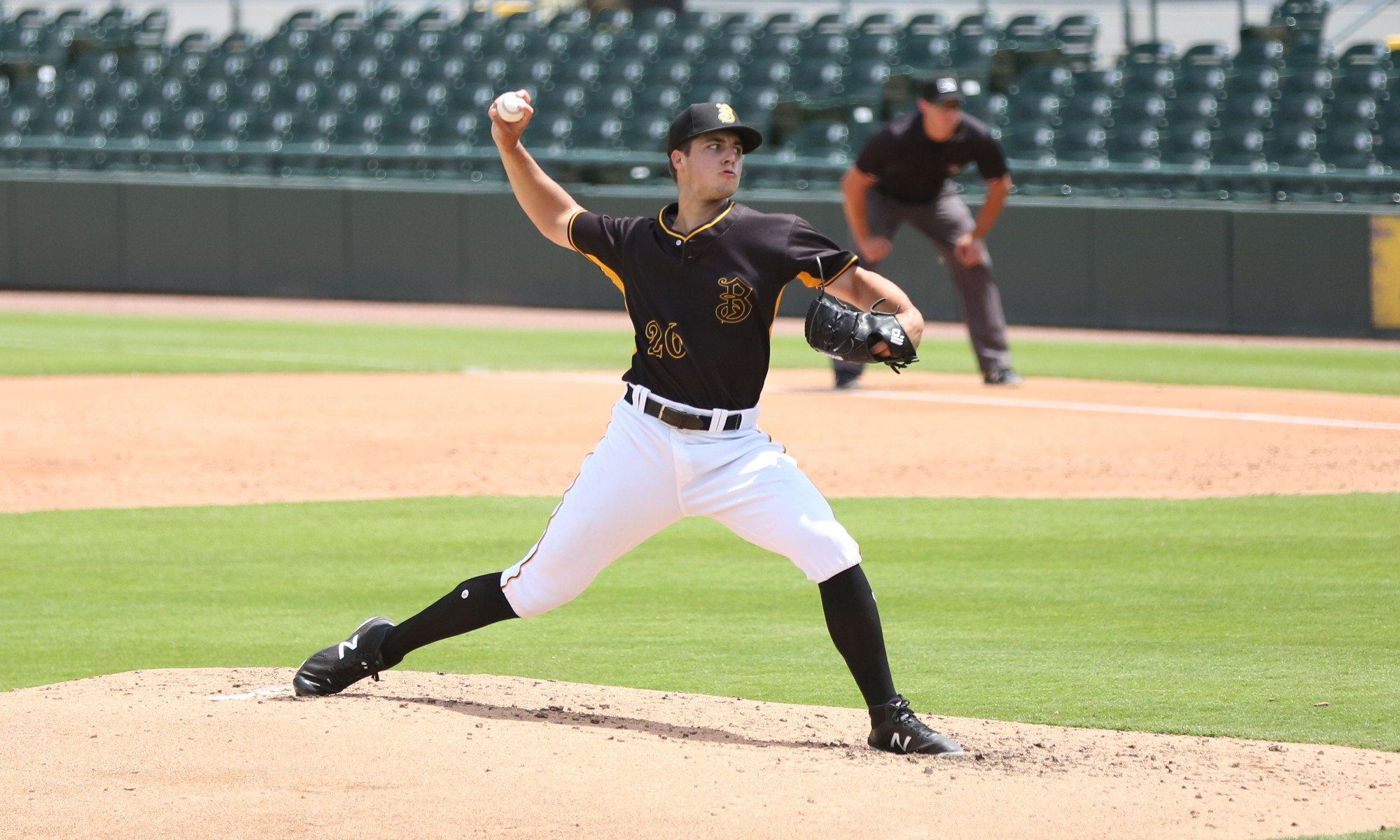 Over the last two days, we have looked at the progress from the top ten prospects on the 2017 GCL Pirates and the 2018 team. Today we go back to 2016 for part three of the series. For each of the previous teams I did a re-rank of how the players would rate now. The 2018 team had the same top ten, just a slightly different order. The 2017 list had one player from the middle jump to the top, as well as some changes at the bottom of the list. Going back to 2016, that gives you a longer look at these players, who were at a low level to begin with, so you expect some changes. First, here is the list, followed by comments.

This list obviously hasn’t aged well. Not due to the rankings per se, but due to attrition. Just five of the players are still in the system. The top three were all 2016 draft picks out of high school, with Ogle and MacGregor drafted early and Kranick receiving an over-slot bonus in the 11th round. The rest were the best of the 2015 DSL Pirates until you get down to Victor Ngoepe, who was debuting in the GCL, where he was over-matched at the plate, but showed excellent defense for his age and some speed on the bases.

Ogle has dealt with some injuries, which has him in the bullpen this season so the Pirates can control his innings. He hits 97 MPH consistently in relief, which is tough to find from a lefty. You would hope that he gets a chance in the rotation next year when he can work without a need to keep his innings low.

Kranick hits 97 MPH as a starter, which is more impressive than someone doing as a reliever for one inning. He has improved his breaking ball since 2016, now throwing a slider that he throws at two speed ranges, getting a little more break on the slower one. He’s also using his changeup more often, which could get him to Altoona this year, especially after his strong month of June.

MacGregor was showing a ton of potential last year after a stagnant 2017 season in Bristol. Then injuries hit, with the second one resulting in Tommy John surgery that has him out all of this season. He was trending towards a top ten placement in the system, but we will see how he is affected by all of this down time.

Yondry Contreras ranked #4 back then partially due to his high bonus, partially due to his youth and partially due to the tools we saw flashes of at that time. Contreras hit the ball hard when he made contact, very hard. He just didn’t make enough contact. He could play center field and had a plus arm out there, as well as decent speed. That made him a potential four-tool player if he could cut down on the strikeouts. That didn’t happen and he was released at age 20 last year.

Edison Lantigua was a surprise cut this spring and now he’s in Low-A for the Baltimore Orioles. He was hitting well during spring and has hit at every level in the past, so the move really didn’t make sense to get rid of him. There was an issue about finding playing time, but they lost him for nothing.

Miguel Hernandez threw 93-95 MPH as a starter and looked outstanding in some starts, but would have trouble throwing strikes in other games. The success got him on the list, but the inconsistency kept him lower. He had the best fastball on the team back then. Hernandez didn’t get much of a shot after 2016, getting moved to relief for two years, where his control got worse. He was released at the end of 2018.

Sousa was a talented pitcher, and still might be to this day (he’s pitching in Panama), but he had a lot of off-field troubles, which we won’t get into here. He would still be in the system without those issues and possibly a top 50 prospect (back-end of the list).

Robles obviously stands out at the bottom of this list. Back then he was a young lefty, who threw 87-88 MPH and had mild success with a very low strikeout rate. He saw a slight bump in the velocity that year, touching 90 MPH, but we always stress that lefties at the lower level can get by with control and not much else. We were cautious with him because he fit the mold of one of those pitchers, but noted that a tick up in velocity could help his case. He now throws 90-92 MPH and has made it to Double-A, where the results are average early on, but look nice coming from someone who turned 21 years old two months ago.

Granberry was a catcher with a solid bat, who was also athletic enough to play all four corner spots. He was released this spring after missing most of the winter due to a knee injury, then suffering a setback in March. That basically described his entire career with the Pirates. I never actually added everything up, but I’d say he had at least eight injuries in five years that cost him development time. Some didn’t show up on paper, such as a broken hand late one year, or the knee injury this past winter. He belonged on the list back then and had a strong 2018 at Bristol, but the injuries really did a number on his career. He plays in Mexico now.

I mentioned Ngoepe above, but a quick look back at him from then showed a lot of the same skills his brother had when we first saw him in the GCL. Both strong defensively, with speed and raw skills at the plate. Gift Ngoepe had a little more pop in his bat back then, and he was faster. Victor made more consistent contact, but it wasn’t hard contact. He’s still very skinny now, but back then he had a ton of filling out to do. His defense with Morgantown has been unreal this season, with numerous highlight reel plays already and we are just in the second week of action. The bat still lags behind.

An updated top ten now would be very close at the top, with Kranick obviously showing the most right now, but Ogle and MacGregor having high upside if they can return to the rotation healthy. I’m rating them as they are right now, noting that it’s basically a three-way tie at the top:

The list stops at seven because that’s all that is left among players who qualified for the list back then. Eduardo Vera was rehabbing from Tommy John back then, but he didn’t pitch enough. Nunez was intriguing, though he’s a lefty who was slightly older than Robles and threw 86-87 MPH. His breakout happened the next year, before he dropped off in 2018. Raul Hernandez received an honorable mention due to his defense, which is still strong behind the plate. He now hits enough that he moved by John Bormann on the depth chart, but he likely isn’t going to make it to the majors unless it’s down the line as a minor league veteran, who gets a cup of coffee due to injuries opening a spot.

Today’s Starter and Notes: The Pittsburgh Pirates lost 3-1 to the Milwaukee Brewers on Saturday night. The Pirates will send out Steven Brault for the series finale. He gave up three runs over five innings against the San Diego Padres in his last start. That followed six shutout innings versus the Miami Marlins. Brault faced Milwaukee back on June 9th and gave up two runs over 6.1 innings, which is his longest outing of the season. The Brewers will counter with 26-year-old right-hander Zach Davies, who has a 3.34 ERA in 86.1 innings, with 57 strikeouts and a 1.39 WHIP. He has thrown a total of 11.2 innings in his last three starts combined, allowing 12 earned runs. Davies made two starts against the Pirates (6/2 and 6/8) and allowed five runs over 13 combined innings.

The minor league schedule includes James Marvel making his sixth June start for Altoona. He has a 2.14 ERA this month, with a 1.13 WHIP and 35 strikeouts in 33.2 innings. Brad Case gets the start for Bradenton. He allowed one run over seven innings in his last start, and two runs over seven innings in his previous performance. Eduardo Vera goes for Indianapolis. He has recorded a Quality Start in three of his last four outings, while picking up five strikeouts in each of his last four starts.

Luis Nova goes for Greensboro for the fifth time. In his two best starts combined, he gave up two runs over 12 innings. In the other two starts, he allowed eight runs over 6.1 innings. Noe Toribio makes his first start of the season for Morgantown after two relief appearances of three innings each. His spot in the rotation was briefly taken over by JT Brubaker, which sent Toribio to the bullpen. Bristol’s Santiago Florez tossed five shutout innings in his season debut earlier this week, giving up three hits, with no walks and three strikeouts. The GCL and DSL Pirates all have off on Sundays.

From Altoona, Pedro Vasquez had a three-strikeout inning on Friday night

WE. ARE. TIED!@BdPope13 pops off the bench and delivers a HUGE pinch-hit, RBI double!

6/29: Ke’Bryan Hayes and Pablo Reyes assigned to Morgantown on rehab.

Six former Pittsburgh Pirates players born on this date, plus three trades of note. Starting with the players, we have INF/OF Delwyn Young (2009-10), pitcher Chan Ho Park (2010), first baseman Dave Roberts (1966), lefty pitcher Don Gross, who was a member of the 1960 World Series champs, and pitcher Johnny Miljus, who played for the 1927 team that went to the World Series. Also born on this date, pitcher Hal Smith, who played for the Pirates from 1932 until 1935. There have been three players in Major League history named Hal Smith and all three played for the Pirates. The other two were catchers in the 1960’s.

Starting with the most recent trade first, and it was actually two on the same day. On this date in 2009, the Pirates dealt away Eric Hinske and cash to the Yankees in exchange for Eric Fryer and Casey Erickson. Fryer played very little for the Pirates, while Erickson never made the majors. It was addition by subtraction though, as Hinske wasn’t playing well for the Pirates and wasn’t happy in Pittsburgh. Fryer came back to the Pirates last year for a short time while they were suffering through catching injuries.

On that same day, the Pirates sent Sean Burnett and Nyjer Morgan to the Nationals for Joel Hanrahan and Lastings Milledge. This deal worked out better for the Pirates, as Hanrahan became the closer, then was traded to get Mark Melancon. Morgan and Milledge were a wash, as neither played very well (both were a 1.0 WAR over two seasons with their new team). Burnett did well in his limited role, which was mostly him being used to face lefties. In 245 games, he threw 201.2 innings.

On this date in 1982, the Pirates traded Pascual Perez and a player to be named later to the Atlanta Braves in exchange for pitcher Larry McWilliams. While the PTBNL turned out to be a career minor leaguer, the deal was basically even as both teams got decent production out of their new pitchers. Both were good pitchers in 1983-84, then fell off in 1985. McWilliams finished fifth in the Cy Young voting in 1983.