Greensboro Report: A Look at the Starting Rotation 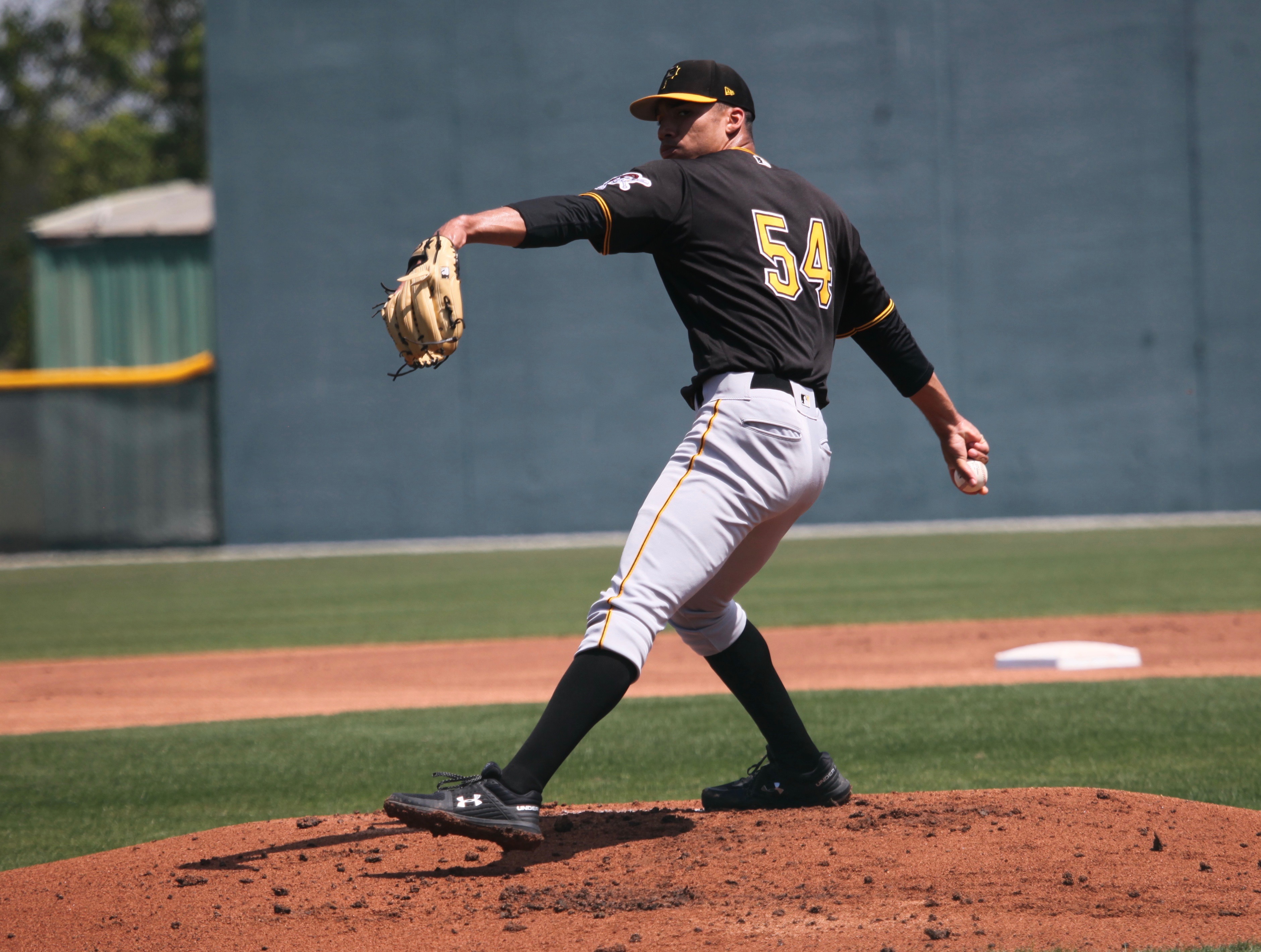 We started a feature here recently where we report on teams after seeing them for at least a few days in a row. These reports will follow live looks at teams, but we will also be sure to cover any team that hasn’t been seen recently in person by watching them online. Tim Williams had live coverage of Bradenton, while Wilbur Miller has been watching Indianapolis games online and gave his thoughts on the team. Today we look at the starting rotation for Greensboro.

Greensboro doesn’t broadcast their own games, but they play a handful of teams that do, starting this week with back-to-back series against Charleston and Augusta. That gave me seven looks at the team, which was one full time through the rotation, plus two looks at two pitchers.

One look at a pitcher obviously doesn’t give you everything you need to know about them, but I can share what I saw as far as positives and negatives. We save these reports throughout the years as quick comparisons to spot differences (both good and bad). For all five starters at Greensboro, we have some prior views, live and/or through the magic of MiLB TV.

I’m going to start with the pitcher we rated the lowest coming into this season because his scouting report has changed. I got to see 21-year-old right-hander Alex Manasa twice during the seven games and came away impressed each time. He is someone who I watched multiple times with Morgantown last year, so I had a comparison. Manasa didn’t have much going for him last year, outside of his ability to throw a lot of strikes. He didn’t throw hard, didn’t miss many bats. There was reason to be patient beyond his age though.

Manasa was a two-way player in college, drafted in the 11th round in 2017, who is now pitching full-time. He has an athletic 6’4″ frame, which looks like it has filled out some since he signed. What I saw this time out was the same strike-thrower, who had added a little velocity, and his breaking ball was now a swing-and-miss pitch. He’s throwing a slider with some late break, down and out of the zone against right-handed hitters. With his ability to use the outer half of the plate, combined with the late break on the pitch, the ball looks like it’s going to be in the strike zone for a long time. That has resulted in 18 strikeouts over 10.1 innings in his last two starts.

He’s someone to watch now, and could end up in the top 50 prospects by mid-season, which didn’t seem likely to me coming into the season.

Manasa isn’t the most impressive pitcher on the team, but I started with him because of the improvements. I got to see Osvaldo Bido twice as well and he pitched well both times. It should be obvious that we already liked him, because he is ranked 28th in our 2019 Prospect Guide despite mediocre stats last year at Morgantown at age 22. He got there because the scouting reports were much better than the results. What he is doing so far this year obviously isn’t sustainable with his 0.53 ERA, 0.47 WHIP and a .105 BAA, but it’s a sign of his potential. His age deserves some explanation.

Bido signed with the Pirates at 21 years old as an international amateur free agent. The initial reports we got were that he threw hard and had an excellent breaking ball, but the control wasn’t there. At first look at Bido, which was actually a photo from shortly before he signed, it seemed obvious what held him back. He was a twig at 6’3″ and probably 150 pounds. He’s listed at 175 now and looks like he has gained a little weight, but he still has room to fill out. That’s not something you usually see at age 23.

Since his season in the DSL, where he walked 36 batters in 50.2 innings, he has issued 21 walks in 92.1 innings. Not only is he now throwing mid-90s as a starter, but he’s throwing a lot more strikes. He has an assortment of off-speed pitches to keep hitters guessing as well. The fastball has movement on it, making it a very effective pitch. Bido has a ton of upside, especially if he continues to add to his frame.

Braeden Ogle was the highest ranked prospect from this group, but we could see that status take a hit. He pitched just three innings when I saw him, and for the time being, his innings are going to be limited. Part of the reason is that he only pitched 17 innings last year due to shoulder inflammation. Even if he stayed in relief the rest of the season, he is going to increase his innings pitched tremendously over one year, which isn’t ideal for a 21-year-old coming off of an injury.

The other part of the reason is that he isn’t holding his velocity. Ogle hit 95 in his first start and sat 95-97 MPH early in his second start, but both outings have seen his velocity dip late. That’s not really a concern when he’s going five innings in his season debut, but when he’s only going three innings after that game, then you start thinking the worst. He pitched last night, so he wasn’t injured over the weekend. Limiting his innings makes a lot of sense at this point. Nicholas Economos will take his place in the rotation.

Brad Case really impressed in the start I saw on Saturday. The tall right-hander put on a pitching display by mixing his pitches and working both corners of the plate. The umpire was giving a wide strike zone outside to right-handed batters. Case has excellent control and was taking advantage of the zone, even expanding it slightly by hitting the catcher’s mitt set up outside. Case is similar to Manasa, though taller with a seemingly effortless delivery. Both worked low-90s (Case sat 90-92), threw a lot of strikes and used their slider effectively. Case hit 94 MPH last year, so we could still see a little more heat in the future.

For many people, Steven Jennings is the top prospect on the team. We are still waiting to see more consistent velocity before we rate him that high, because there have been times when he’s sitting in the high-80s. Jennings is the youngest in this group, turning 20 years old back in November. He also missed time due to injury in school and during the 2017-18 off-season. So there is good reason to be patient here. It also helps that he has decent control and his breaking pitches can both be effective at times. There are some inconsistencies in his performances. He can go on runs where he’s giving up nothing, but can also let innings get out of hand in a hurry. I saw him give up two quick runs in his start, make quick work of the next three innings, then give up three runs and get removed with just one out in the fifth.

It’s going to be interesting to watch Jennings through a full season, to see if he can make improvements as the season goes along. Or will we see a drop in velocity later in the year like we heard about last year. A big part of his learning could just be him keeping damage to a minimum by limiting the blowups.

With Ogle leaving the rotation, it takes away some of the interest for now, but you still have huge potential upside with Bido, and three others pitchers who we could see take steps forward this season. It’s a nice group of strike-throwers, especially Case and Manasa. They all have off-speed pitches that get swing-and-misses, and there is room for more velocity. Bido doesn’t need the last part to be successful, but it wouldn’t hurt.