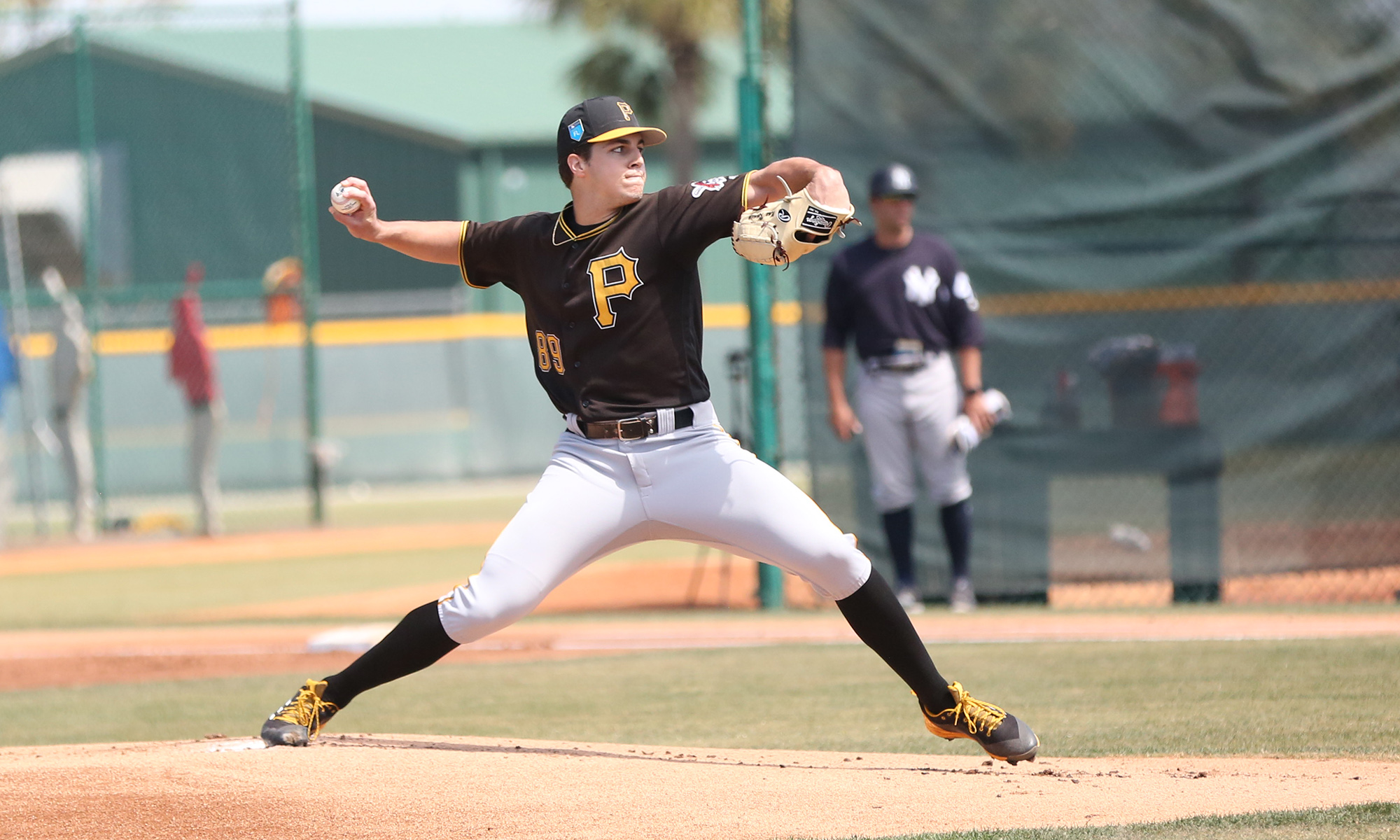 Time to answer some of our Q&A submissions from the last two days. We will split the answers up into multiple articles, so we can go a little more in depth on some subjects. Here we look at two questions on Jacob Stallings, one about breakout pitching prospects, a look at Mason Martin, and finally, the ballpark in Greensboro.

Bill C: Stallings-related question: Carrying a third catcher would seem to be a luxury this Pirate offense cannot afford. Part of the argument we’ve heard (apart Stallings being out of options) is that doing so would “free up” at bats for Diaz and/or Cervelli when they are on the bench. But even if Cervelli & Diaz are the only two catchers on the roster, why do so many teams like the Pirates feel like they can’t use a catcher off the bench as a pinch hitter more regularly? If you are using a catcher as a pinch-hitter, the odds are that it will be during or after the 5th or 6th inning. Statistically, how many times does a starting MLB catcher happen to get injured for the remaining couple innings of a game (I would imagine it is very rare), and do those odds justify keeping a solid-hitting catcher on the bench for an emergency situation that never, or hardly ever, actually arises? Isn’t the worst case scenario putting a Sean Rodriguez type behind the plate for a couple innings and then calling up a new catcher the very next day? I’ve never fully understood why it’s ok to throw position players out there as pitchers during emergency situations but managers seem to be terrified about using good backup catchers as PH — what am I missing?

dr dng: I posted this on another thread, but this would probably
be a better location: Tim or John, is there much of a chance that Stallings could be traded
to a team needing a #2 and we get a #3 who has options or is 1) Stallings not good enough to be someone’s #2 2) It would be expensive and the Pirates would have to give up another player as well

We had two questions related to Stallings taking up a possible roster spot from Opening Day until September 1st, when expanded rosters make it a moot point. Before I get into the answer, I have to mention our article from yesterday on the catching depth, as well as mention that we have another article dealing with Stallings coming up. As a side note, Stallings just hit a two-run homer as I was typing this up.

Here is where personal opinion is just that, and doesn’t fit the Pirates. I agree with the first comment. If you need to use your backup catcher to pinch-hit late in the game, do it. How many times has a catcher been removed due to injury after the sixth inning? It rarely happens, so even if it does line up with the time you already used the backup in a key hitting spot, the worst case scenario is that your emergency catcher has to go 2-3 innings. Then you add a catcher the next day. You might get burned once a year, but is that worth holding back a better pinch-hitter all throughout the season? The obvious answer is no.

Managers don’t think that way though. They needlessly worry about a “what if” situation that has very little chance of happening. So we can say that it doesn’t make sense all day, but that won’t change anything. Knowing that, we can safely say that having three catchers would allow more pinch-hit at-bats from both Diaz and Cervelli.

As for Stallings situation, right now Elias Diaz seems unlikely to be ready for Opening Day. He isn’t doing anything and the season starts 27 days from now. In fact, he is doing something while being sick, and that’s getting further away in the wrong direction from his Spring Training starting point. I don’t think that there is enough time for him to be Opening Day ready, even if he started doing baseball activities tomorrow. So the Stallings decision right now is something that will be temporarily delayed for an unknown time period.

By the time Diaz is ready to return, there could be more of a reason to hold on to Stallings, or less of a reason. You don’t want to assume health with Francisco Cervelli, while on the other hand, Christian Kelley is basically where Stallings was just before he debuted in the majors. If Kelley continues to show progress, then he can take over that third catcher role.

I think the reason you want to keep Stallings around is that he’s worked with so many of the pitchers in the system and there seems to be a lot of praise with how he does with them. Meaning, he has more value to the Pirates right now, than he does to another team that would use him in the same role. I think he is a legit MLB backup, so there is a chance that you could lose him by putting him through waivers.

Stallings could be the backup to Diaz by the time the trading deadline passes this year. At worst case, it seems to be very likely that he’s the backup in 2020. If you do think about it that first way though, then you’re only going with an extra catcher from the time Diaz returns until the time Cervelli is traded. It becomes something much less than a late March until September 1st decision. A shorter time-frame makes it an easier decision.

As for the trade question, I don’t think you will see that happen. That’s mostly because Christian Kelley is a possible third string with no 40-man roster spot, while Jason Delay and Arden Pabst both have that same potential, just a year behind Kelley right now. Pirates should have that role filled in house for the foreseeable future. If they traded Stallings, I’m guessing his return would be a low level DSL/GCL pitcher with upside. That seems to be an area of focus now.

joe s: Mason Martin had a great first year and then showed some miss to his swing last year. The power is there but will he hit enough to ever get to it and what do you expect from him going forward?

Martin doesn’t have as much swing-and-miss to his game as the high strikeout totals would suggest. He looks for the perfect pitch to hit. The higher you go in the system, the fewer perfect (hitter) pitches you see. A lot of his strikes were from laying off a pitcher’s pitch. His extreme patience got him in trouble. For his profile to change, his approach will need to change. I do see better things for him in 2019. He learned a lot from his tough season and he worked on his conditioning this winter, losing 12 pounds, while putting on muscle. Better conditioning, both physically and mentally, should help lead to better results, but he’s going to need to be more aggressive with pitches in the strike zone.

MacGregor would be a huge surprise as a breakout this year because he’s out all season recovering from Tommy John surgery. As for the other four, I don’t think Jennings could surprise even if he broke out, because people expect him to be better. A lot of prospect sites are high on him. We are in more of a wait-and-see approach because he has shown poor velocity as recently as the instructional league, where he was sitting mid-80s at the end of starts.

I think Kranick (pictured above) could surprise some people this year. He has been working on things each of the last two seasons, so some of the results have been skewed. He also had a stretch late last year that went virtually unnoticed when he had a 34:1 SO/BB ratio over 27.1 innings. He has improved his slider, worked on improving his changeup last fall and this off-season, and he has shown excellent velocity, hitting 96 MPH in starts.

I just recently saw Ashcraft and he is a really big kid, who looks like he has started to fill out. The Pirates must have seen something that they really like to give him a $1,825,000 bonus, so he’s another case of it not being a surprise if he showed more than what we saw last year. It’s something that people expect from him.

I expect both Ashcraft and Michael Burrows to go to Bristol, where it’s tough to have a true breakout. It’s a hitter-friendly league and a short-season team, giving them limited chances to impress. We really liked what we saw from Burrows, who showed some real polish already. Between that polish and a smaller (but not small) frame than Ashcraft, there isn’t as much projection. Burrows could get more notice than he gets now, once more people get a chance to see him pitch.

Sophia Morel: Are there any notable differences between the West Virginia Power and Greensboro Grasshopper ballparks that might affect players stats? For example, is one park pitcher friendly and the other hitter friendly?

The field in Greensboro is noticeably shorter right down the lines, especially in left field, but the middle of the field plays the same. Greensboro is just 315 to the left field foul pole, 312 in right. West Virginia is 330 to left, 320 to right. So a right-handed pull hitter will get some help. The stadium doesn’t play small though, with only one 30+ home run season in the last 14 years and that was Giancarlo Stanton, back when he was still Mike Stanton. The team has had a few years where no one hit ten homers, though that speaks more to the Marlins during that time than the stadium. So basically, it plays about the same as West Virginia, unless it’s a righty pull hitter.