Winter League Recap: Performances by Gage Hinsz and Eduardo Vera Lead the Way for the Pirates 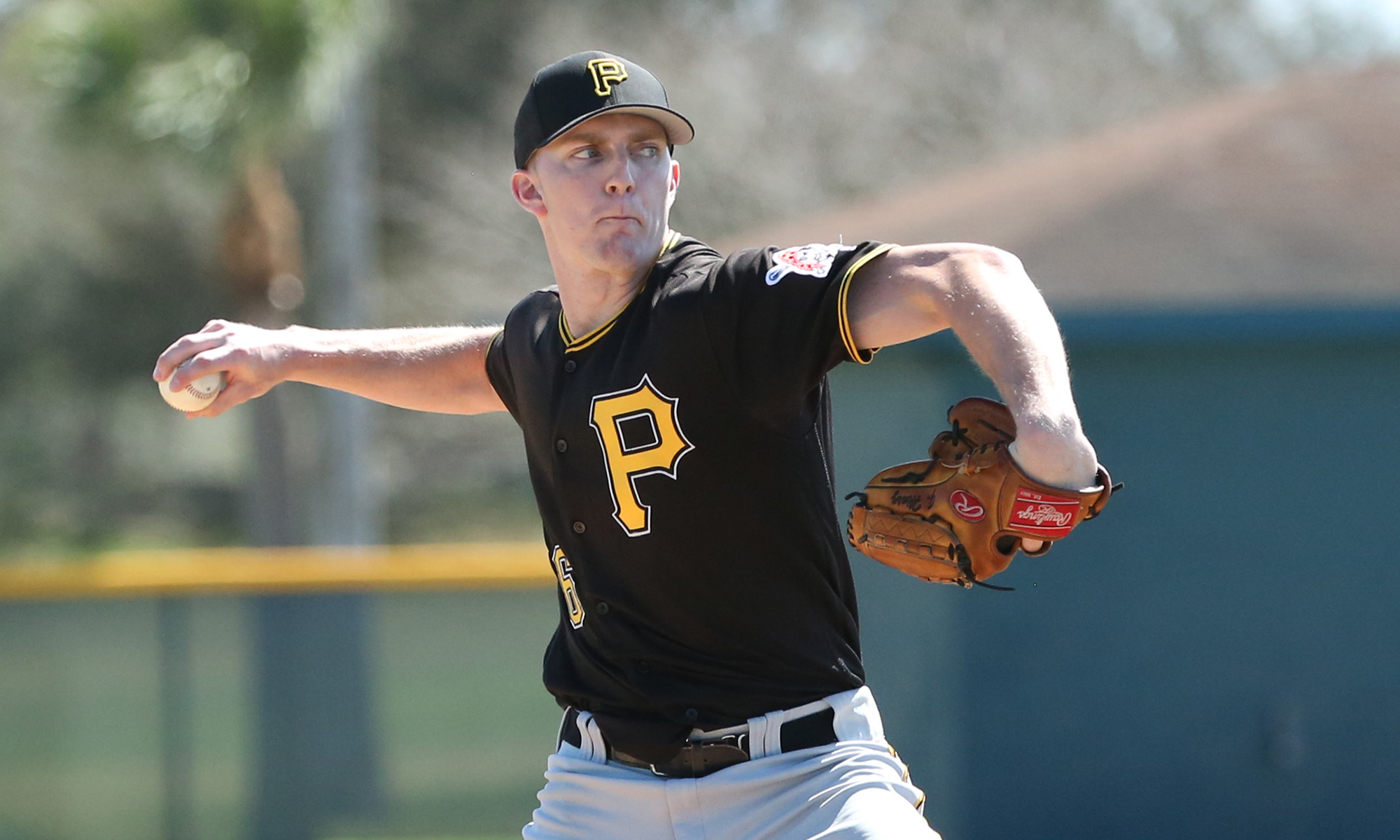 The winter league season got off to a very slow start for the Pittsburgh Pirates. Just a handful of players were seeing action. Once the later starting leagues began playing, the Pirates ended up with a decent amount of winter participants. Below you’ll find a recap for every player, along with a note about the level of competition in their league compared to where they are in the minors. I broke the players down by country.

The player who ended up seeing the most playing time in the DR was Alfredo Reyes, a utility player, who split last year between the top three levels. The Pirates re-signed him as a minor league free agent this off-season. He did well in the DR and is just finishing up his winter in the Caribbean World Series this weekend. Reyes has three plus tools in his arm, defense and his speed. He can also play anywhere on the field except catcher. He put up an .817 OPS this winter during the regular season, which was well above average for the league. Considering his age (25 this upcoming season) and previous experience, this was a very successful winter.

The best prospect to see regular time in the DR was Pablo Reyes, who played nearly the entire regular season. He had a .261/.346/.331 slash line in 41 games, while moving all around the field. That slash line doesn’t look positive, but it was above average for the league. Considering his experience, it was a mediocre winter, though it helped add to his defensive versatility.

Shortstop Erik Gonzalez was acquired from the Cleveland Indians early in the DR season. He would hit .227/.243/.288 in 35 games. That’s obviously not good, especially for someone with his big league experience. His defense at shortstop also left something to be desired, though his tools at the position are better than his high error total indicate.

Catcher Steven Baron was playing in the DR when he signed with the Pirates, then stopped right after he signed. He played just 11 games, so you can’t take much from his .690 OPS.

The Pirates had a group of prospects makes their winter debut at the end of the season. They will all likely see more time next year, but infielders Adrian Valerio and Stephen Alemais, along with outfielder Lolo Sanchez, each got their first game out of the way. Alemais played two games, while Sanchez and Valerio debuted on the final day of the season.

On the pitching side, the Pirates had six players see action. One was Tyler Eppler, who was later sold to a team in Japan, so we don’t need to go over his performance. Another was Major Leaguer Michael Feliz, who pitched briefly. In 5.1 innings, he allowed one run on two hits, with no walks and five strikeouts.

The top prospect in the group was Jesus Liranzo, who spent most of 2018 in Triple-A, so this level of competition was perfect for him. He had a 3.21 ERA, an 0.86 WHIP and a .163 BAA in 14 innings, while picking up 16 strikeouts. The key to his winter was a slight mechanical adjustment he made, which helped his control and added a tick to what was already considered plus velocity. If that can carry over into 2019, you will see him in Pittsburgh this summer.

The other three pitchers were lefties Ronny Agustin and Oddy Nunez, and righty Joel Cesar. None of them have pitched above High-A, so this winter competition was better than they have faced before. Agustin got into action late, making two regular season appearances and three playoff games. He did well, but it was limited action. Nunez gave up a lot of runs in his one start and six relief appearances, despite a .207 BAA and a 1.09 WHIP. Cesar struck out the only batter he faced. As I said, they are all inexperienced for this level of play, so it was more about getting their feet wet in the league, before they are ready to pitch regularly during the winter.

Venezuela had some interesting stories, even if it was a small group. The top prospect was Luis Escobar, who was making up for some lost late season innings due to a team suspension. He also pitched for Colombia in an exhibition tournament before debuting in Venezuela. Escobar is from Colombia, but the league there is about equal to Low-A ball, possibly just a little better than the Appalachian League (Bristol) during down years. Venezuela is similar to strong Double-A/weak Triple-A competition, so it fit him better. Escobar made four starts, posting a 4.70 ERA, a 1.57 WHIP and a 10:9 SO/BB ratio in 15.1 innings.

Elvis Escobar was also in the league and he was impressive in a lefty relief role. Considering the level of the league, his pitching experience and his limited role, he pitched outstanding. After allowing a run on October 30th, he didn’t give up another hit (yes, hit) until 58 days later. He re-signed as a minor league free agent this winter and has an invite to Spring Training, so this winter experience could really help him towards making the majors someday soon. He’s a lefty, who hits 96 MPH and has solid control over three pitches.

Elvis isn’t related to Luis, but Vicente Campos is his cousin. Campos was already near the end of his winter season when he signed with the Pirates as a minor league free agent. He showed improved velocity late this winter and didn’t give up an earned run over his final 35 innings, including playoffs. He was in the same bullpen as his cousin Elvis, so they were doing a great job of shutting down opponents late. Campos was once a strong prospect, but injuries have set him back. He is still just 26 years old.

Jose Osuna was the only hitter for the Pirates in Venezuela. He put up a .971 OPS in 18 games and he played a lot of right field. Osuna has hit well during the winter in each of the last three years (he’s hit well in Triple-A too), but it has yet to carry over into the majors.

This was a disappointing year for Mexico as far as participation. Eduardo Vera was the only Pirate player to see action and the Pirates limited him to five starts and five innings per start. Mexico is about equal to what Vera was seeing in Altoona at the end of the seasons. He finished strong with the Curve, then threw shutout ball in his first four starts in Mexico. That should be enough to get him to Triple-A at the start of 2019. Baseball America named him one of the top prospects to impress during winter ball.

Before the season started in Puerto Rico, the league announced that they reached an agreement with the Pirates to supply players to the winter league. That was supposed to start this upcoming winter, but the Pirates ended up sending five players to the league. The league was very strong this year due to a four-team setup instead of five clubs. The best players filtered to the other clubs, giving some teams a lineup as good as any you would see in Triple-A.

Gage Hinsz was the biggest story of the winter. Coming back from open heart surgery in May and a shoulder injury that ended his 2017 early, Hinsz was facing lineups that had 4-6 players with MLB experience every night. He dominated during his brief time, posting a 1.08 ERA and an 0.92 WHIP in 25 innings, with 23 strikeouts (which was still the league high for weeks after he stopped playing). He threw shutout ball in four of his starts, including six scoreless with eight strikeouts in his final game. He just needed to appear in games for this to be a positive winter, but he went well beyond that by carving up lineups much better than anything he saw in High-A ball.

Lefty Jordan Jess and righty Bret Helton also pitched in the league. Jess was coming in with the same High-A experience Hinsz had prior. He had his share of issues, with a 5.11 ERA, a .324 BAA and a 6:10 SO/BB ratio in two starts and ten relief appearances. Helton didn’t do any better despite pitching in Double-A this year. He had a 10.50 ERA in six relief appearances, with a 2.83 WHIP, seven walks and just one strikeout. In the playoffs, Jess tossed seven shutout innings over three appearances, so he at least finished strong.

Jerrick Suiter lasted just 16 games due to his .189/.259/.226 slash line. He had a lot of trouble in Mexico last winter, so despite playing at an appropriate level each year, he has been unable to have a positive winter experience.

Rodolfo Castro joined the league late and hit .269/.296/.269 in eight games, before going 1-for-8 in five playoff games. Castro is 19 years old and only has Low-A experience, making this league a huge step up in competition. He had some strikeout issues, but that’s to be expected with that kind of leap in play.

Robbie Glendinning was the only player from the Pirates in Australia this year. The level of play there is about equal to High-A and it’s a high offense league. Glendinning played in Low-A this year, so it was a nice test that he easily passed. Playing third base every day, he hit .364/.467/.545 slash line over 28 games during the regular season, then went 7-for-16 with four walks, for a .438/.550/.875 slash line, in the playoffs. He got some great experience by playing next to MLB veteran Peter Kozma, who was the regular shortstop for Perth. Glendinning was named as the league’s top third baseman.

Colombia had some excitement this winter with three teenage middle infielders seeing regular playing time. Carlos Arroyo is just 17 years old, while Edgar Barrios and Francisco Acuna were 18 for the season (Acuna has since turned 19). All three of them had below average numbers on offense, but the level of play is much better than they have faced yet in pro ball. Acuna should be at that level next winter, while Barrios and Arroyo are about two years away. That basically means that the winter was great experience for them and you shouldn’t judge them too harshly on the stats. In what was completely odd (possibly done on purpose), the three of them didn’t attempt one steal, despite all being above average runners.

Pitcher Andres Arrieta was the fourth Pirate in the league. The 21-year-old righty had a lot of trouble, giving up more runs than innings pitched, while leading the league with ten wild pitches. While he is closer to the league average age, Arrieta was a rookie in pro ball in 2018 and threw just 18 innings, so he’s relatively inexperienced.

The only Pirate player in Panama was Brian Sousa, a 21-year-old righty who was suspended by the Pirates for the entire 2018 season. In Panama, he pitched 13 innings over five appearances this winter, allowing five earned runs on nine hits and nine walks, with ten strikeouts. Panama is about equal to the play in Bristol, but it’s a step below Colombia.