From Million Dollar Arm to the WWE: Catching Up With Former Pirates prospect Rinku Singh 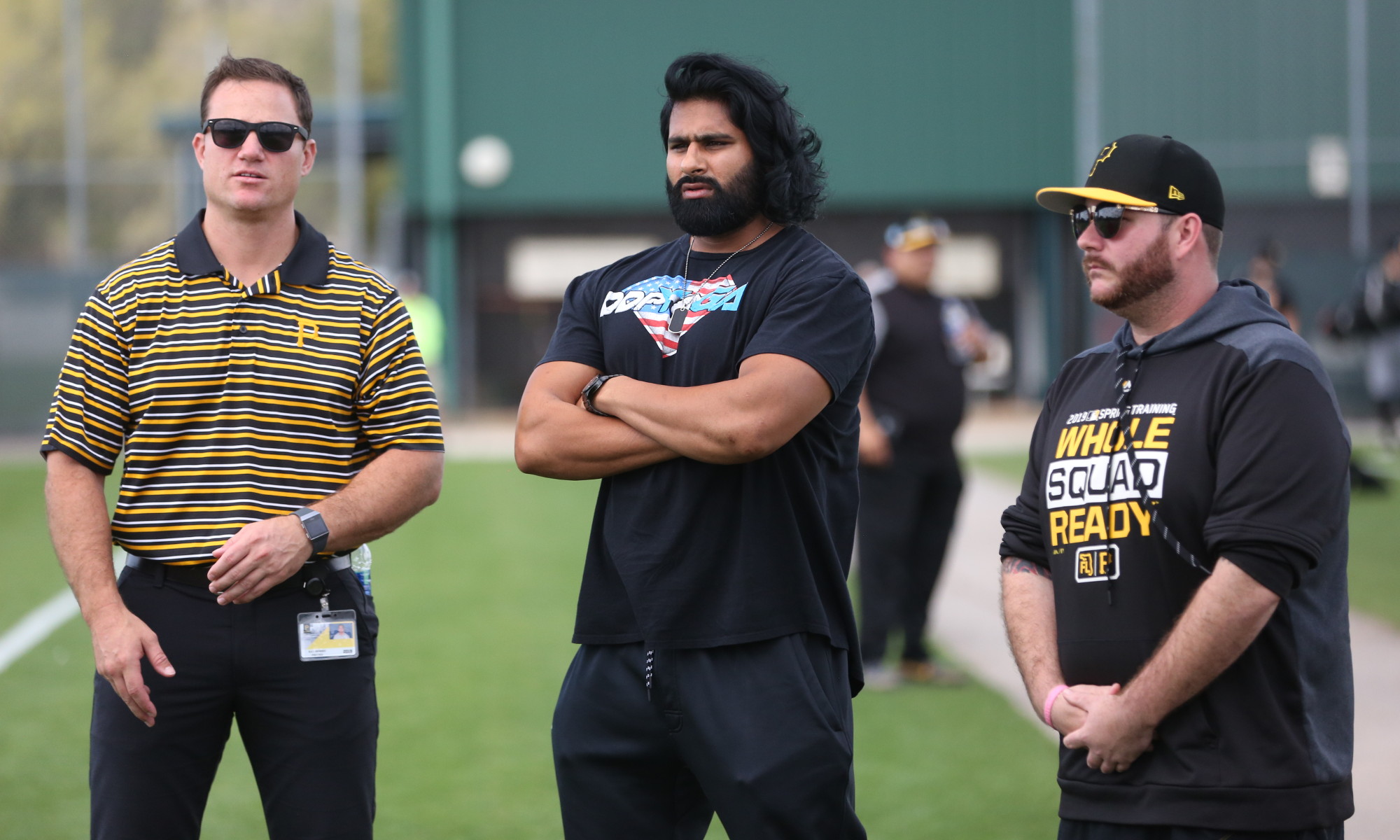 BRADENTON, Fla. – Rinku Singh might be one of the best stories in my time covering the Pirates. The country of India isn’t known for producing baseball players, but in late-2008, there was a reality show contest called “The Million Dollar Arm”, looking to find a baseball player in a country that is more popular for javelin throwing.

You’ve probably heard the story before. Singh won, throwing an 89 MPH fastball, despite never playing the sport before. The lefty was then signed by the Pittsburgh Pirates, along with Dinesh Patel, with the pair receiving a combined $8,000 bonus. Patel, a right-hander, was released in 2010. Singh, a lefty, actually made it to A-ball, which is quite an accomplishment considering the story. Disney later made the backstory into a movie, called “Million Dollar Arm.”

Singh never had strong velocity, but surprisingly had some of the best breaking stuff in the system, with a lot of movement on his pitches. You can see some of that below in a video from Spring Training 2013, which also features Singh striking out Elias Diaz at the end of the video.

Singh’s career was derailed in 2013 after needing Tommy John surgery. He didn’t pitch again until 2016, making only one appearance. In between, he had a second Tommy John surgery, and another injury when his elbow snapped while throwing a pitch during his rehab.

Singh ended up moving on from baseball after the 2016 season, and surprisingly went on to become a professional wrestler in the WWE. He was in camp today at Pirate City (he is currently in the NXT program in the WWE, which is based out of Orlando), greeting some of the old players he played with, and getting in a workout on the lower half of his body.

I had a chance to catch up with Rinku, discussing his transition into professional wrestling, including how his baseball past is going to impact his future finishing move in the ring. Here is the Q&A from our talk this afternoon.

How Did You Get Into Wrestling?

After deciding to take some time off from baseball — and I think the Pittsburgh Pirates had already given me every tool to get better, personal and professional life — I think that mindset was kind of ready to do anything and everything that came up. The WWE opportunity came, and I took it, because of the mindset I had from this organization, and the hunger of making change in the world.

How Has the Workout Plan Differed Between Wrestling and Baseball?

If you want to compare [the training programs], in professional baseball, I can’t lift the heavy upper body weight, because if I do, I’m getting nothing but hurting myself, because as a pitcher, I’d like to be flexible and be able to whip the baseball. In the wrestling world, our body gets beaten down every single day of your life. You put your body on the line every single day to put a smile on a fan’s face. Because of that, you have to stay fit, and we train way more than we train in baseball. I’m not going to say which one is more and which is less. I’ve been in baseball training, and now WWE. Definitely more challenging in WWE as far as the traveling, being in the ring, getting thrown around, and learning. Your body gets beaten down. WWE have so much research and people out there that they will help you to get better in every field. They give us all the tools to stay healthy, to stay fit, and no matter where you go, you look great.

That’s kind of a different dynamic. It’s not just building up strength, but you’re taking bumps, hitting the mat. That’s got to be wearing on your body.

It truly is. We put our body on the line every single day. It’s not like one of those things, you walk into the ring and you just show yourself something you are not. You have to go out there and show people the hunger you have for success in this business and you go after it every single day. It is hard when you wake up sometimes, you just feel like you don’t have it, but it’s all about mindset. If you have very strong mindset, and if you have hunger of doing something greater than everybody else, you have to challenge yourself every single day to get up and repeat and re-do it again.

WWE, we have one of the world’s best facilities for acting, for training, for medical, to anything you name, we have it. It’s all under one roof. We have studio, it’s called the mirror room, where you practice how you talk and your looks and everything. Then you have to review it with the producer, and they’ll walk you through it, what you have to work on, and what not. We have help with everything, from the ring, from the training. For a training coach, we have Sean Hayes. He’s one of the best, from the NFL, we have the best coach ever. You can tell. [Motions to his build and laughs.] So we have every tool out there to become a WWE superstar.

You made your debut up in Tampa. How was that experience?

It was great. First match, a little nervous. But it went very well. It went better than I expected, to be in the ring in front of the crowd. That was the first step.

Are you more frequently in the ring now?

Yes. I’ve been having matches now almost every weekend. And then training on top of it, and learning — we always have to learn, and always have to focus on developing a character and all of that stuff. It’s been going well, and I think I made the best decision going to WWE. The WWE world gives you that voice to inspire the world, to be the role model all around the world. You have the microphone in your hand, and you say what you want to say to inspire the kids all around the world. It’s amazing. The journey has been absolutely incredible.

You already had a unique story, making it into baseball from India. Now you’re making it into professional wrestling. Is that along the same lines, as far as providing an example, something to strive for from people in your country for another opportunity?

Yeah. Believe it or not, I feel like the part of Rinku Singh’s journey had been missed of what you have seen in the Million Dollar Arm movie. There’s a great story about catching a train, not having money to go to the tryout for the Million Dollar Arm. Getting there and later on you realize you received a check, and all of that big moments of life. Going to the train and sitting in the toilet, just because I didn’t have money to buy a ticket, wondering what I’m going to do with that money when I’m going to win. Building a house and all of that.

But going into WWE, it was kind of a new thing. I feel like my journey from India to Million Dollar Arm to the Pittsburgh Pirates organization had prepared me for every step of the way. I feel like that helped me to transform into my new carrier. I think that was a big thing for me.

Who have been some of the big influences for you in the WWE so far?

The Pirates’ organization itself is one of the great organizations. I feel like being with the Pirates’ organization for so long, they’re just amazing. It doesn’t matter how much I talk about it, I’m very much thankful for the organization. They built me as a man, and as a player I’ve learned so many good things with this organization. I have been spreading this culture. Everywhere else I’ve gone, I’ve always carried the Pittsburgh Pirates culture and tradition. That helped me a lot going into a new profession in WWE.

Being there, learning a lot from our WWE superstar John Cena, if you see how much he does outside of the ring, it’s absolutely amazing. Going everywhere and putting a smile on a kid’s face. He’s always visiting hospitals and making time for the kids. It’s amazing to see, and that’s kind of inspired me every single day to get better and get more out there to put a smile.

[Laughs.] Finisher, we’re talking about the fastball, Million Dollar Arm pitch. We’re thinking about working on that with the left arm after the big — I can’t say my move — but it’s going to be a left-hand finisher.

So incorporating the baseball past?

Absolutely. In the wrestling world, to introduce the baseball thing. It’s a totally different audience, baseball versus wrestling. That’s a way to introduce the Million Dollar Arm, plus the Pittsburgh Pirates and the story behind it.