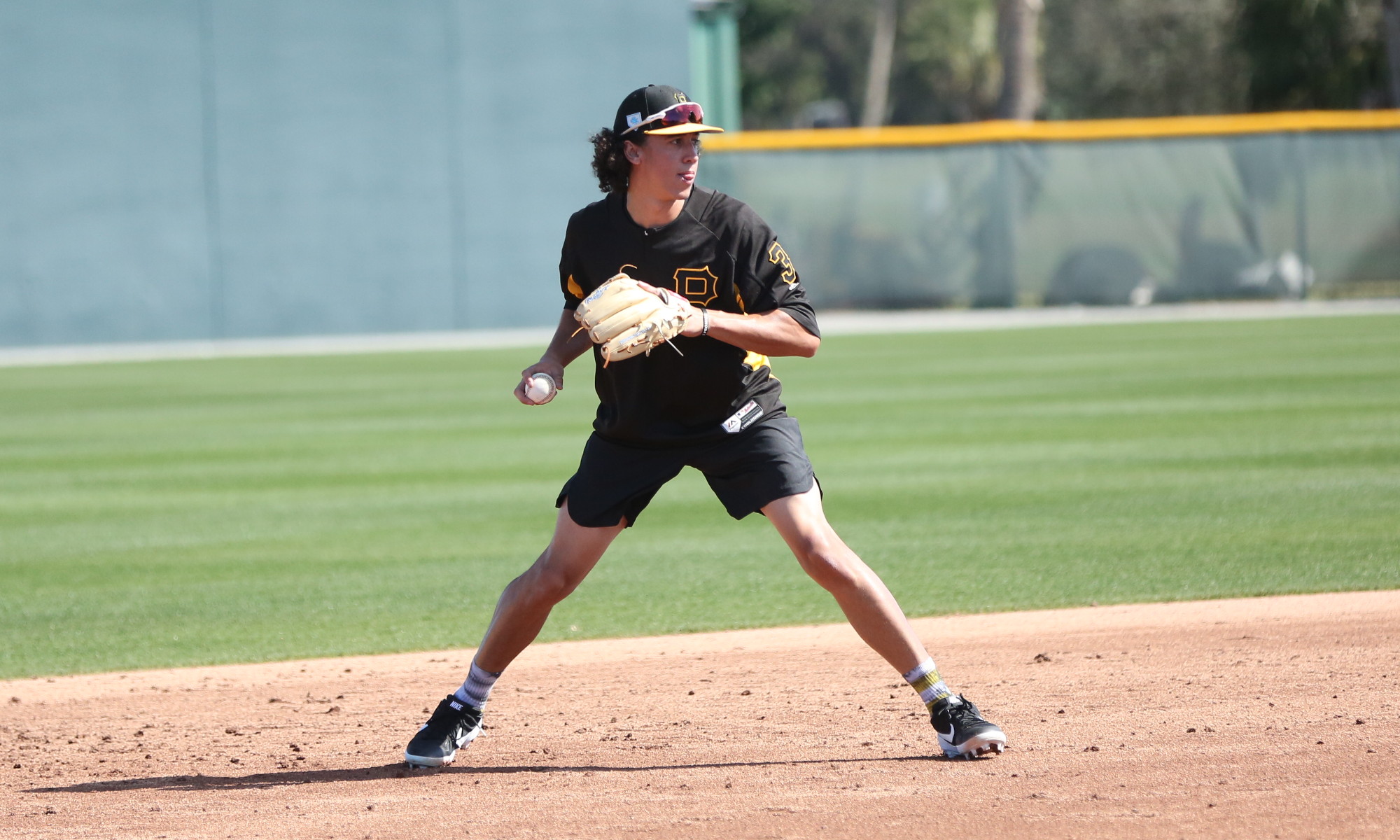 BRADENTON, Fla. – Cole Tucker is in big league camp with the Pirates, but don’t expect him to make the Opening Day roster.

The Pirates are going with one of Kevin Newman or Erik Gonzalez for their starting shortstop position. Meanwhile, Tucker is expected to make the jump to Triple-A at the start of the season, with hopes that he can carry over his success from the Arizona Fall League at the end of 2018.

Tucker was one of the leaders in the AFL last year, hitting for a .370/.442/.457 line in 81 at-bats. The numbers in the AFL come with a disclaimer that it’s a very hitting friendly atmosphere, and a small sample size. But any time you see success, the hope is that it stems from a change, or is a sign of what is to come the following year.

The numbers weren’t a result of a change for Tucker. Instead, they were a continuation of an approach he had in the second half of the regular season.

“I didn’t really add anything crazy in the fall league,” Tucker said. “I was basically carrying over what I was doing and having success with in the second half during the season in Altoona.”

Tucker’s approach at the plate has been focused on standing tall and tapping into his athletic frame to have consistent hard contact. He hasn’t seen much consistency throughout his career, including in Altoona last year. He chalks his AFL success up to pitch recognition.

“I was hitting the ball hard all over the place, both sides,” Tucker said. “Just feeling really confident, and just swinging at good pitches. That’s what I want to carry over from the fall. Having that really strong Arizona Fall League, I just want to come here and continue to swing at good pitches and do damage and drive the ball like I was in the fall league and just have that be who I am going forward. I think I’m a really special player when I do that.”

It’s not very inspiring to hear that swinging at good pitches is the change that led to Tucker’s success. That raises questions. What led to the change, and the sudden avoidance of swinging at pitches that the pitcher wants you to swing at? How can this be carried over to the upper levels, where you have fewer mistakes to take advantage of? Tucker didn’t have a good response to those questions, just reiterating his focus at the plate, and keeping his hitting approach simple.

He did reference better numbers in Altoona in the second half with that approach. His numbers did improve over the first half numbers, with an .811 OPS in July and a .737 OPS in August and September. That’s an improvement over a .620 OPS in the first three months of the season.

Looking beyond OPS, Tucker did display a similar trend in Altoona and the AFL. He hit for a .273 average with a .360 OBP in the final months with Altoona. His AFL numbers were heavy on the average and OBP. The power was better in Altoona, with a .138 ISO, but lower in the AFL at .087.

If Tucker can be a guy who can hit for average and get on base at a high rate, then that would be enough to make him a starter in the majors at shortstop. He has the defensive skills at short to provide value on that side of the ball, and even acknowledges that this part of his game is ahead of the offense.

“I played really well defensively,” Tucker said of his AFL performance. “I feel like I was still making strides in that. Everyone wants to talk about the offense, because that’s the thing that has been catching up to my defense. I feel like I got way better defensively.”

The Pirates have Tucker locked in at shortstop. They’ve never moved him off the position, even in practice. That’s a move they use with guys who they project to be regular starters at a position. It’s justified with Tucker, as his defense is strong at the position.

The problem here is that good defense plus average and OBP wouldn’t make Tucker a high upside starter. The Pirates had a below-average to average starter in Jordy Mercer. They’re replacing him with either Newman or Gonzalez, and both guys profile with a similar upside. Tucker is the best bet of the group to be above-average, but would need to tap into his power potential, along with the defense, average, and OBP, to reach that level.

Tucker will have time in Indianapolis to show that his approach from the second half of last year can lead to results at a higher level. He’s reached the point in his development where the results on the field now matter more than his skills and potential. That means he will need to start tapping into his big frame, and at the least make good enough contact to maintain a high average and OBP.

Tucker is preparing to play the longest season he’s ever played, meaning he’s hoping to end up in the majors by the end of the year. He will need to carry over his results from the second half and the AFL to make that happen. If he can add some power to his game, that would be a nice bonus.

I’ve been high on Tucker’s potential, just based on the frame, the contact skills, and the hard hits I’ve seen that have come far too infrequently so far. But as we enter a point in his career where it’s time to show results, I can’t say that I’m confident those results will come in a consistent way. That’s mostly due to a lack of a strong reason or change for the results and a small sample with the success that he’s had. This isn’t saying that he can’t be successful and reach his potential as a starting shortstop. But it’s time for him to consistently show that potential on the field, with little reason to expect the results before they happen.