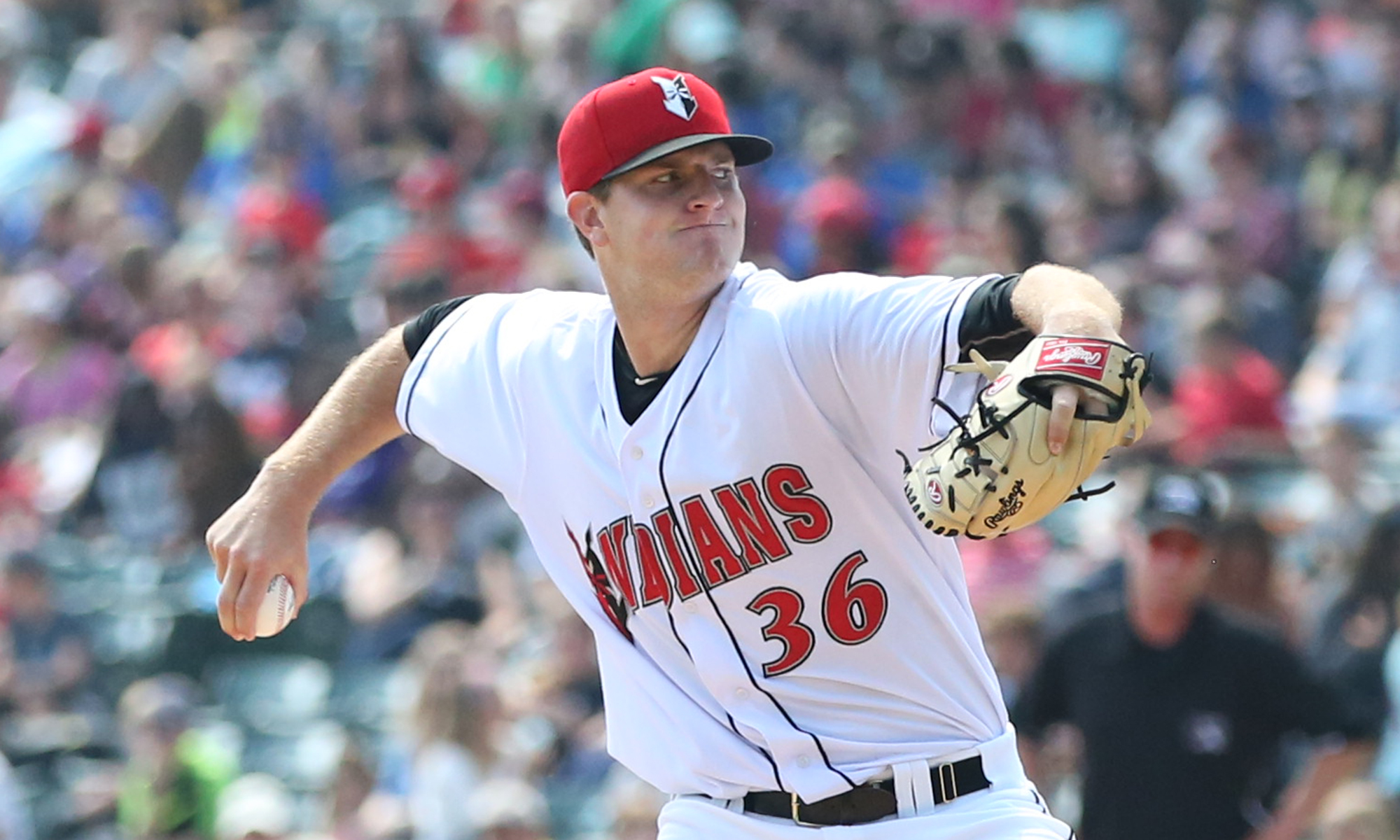 The MLB Rule 5 draft is at noon today. The Pittsburgh Pirates go into the day with an open spot on their 40-man roster. That spot will be filled by free agent signing Jordan Lyles as soon as his contract is official (likely happening tomorrow), but the Pirates still have the option to make a pick today. They have the 17th overall pick in the draft.

For those who are new to the Rule 5, here is a quick introduction to what is going on today. Teams protected prospects on their 40-man roster last month. For the Pirates, that list included Mitch Keller, Cole Tucker, JT Brubaker and Jason Martin. That left them with 48 eligible players for the draft today. A large majority of those players have zero chance of being selected in the Rule 5 draft today. It is possible that the Pirates could see some losses of lesser players in the minor league portion of the draft, which I will get to just below.

The Major League side costs teams $100,000 per pick and the players have to be kept on the big league roster throughout the season, with at least 90 active days on the active roster and 60 have to be before September 1st. The disabled list is often used to help teams keep a player who might not be ready for the majors, so you sometimes see teams cut it close with that 90-day rule.

The Pirates have 16 players who are eligible for the minor league portion of the draft. Those picks cost teams just $24,000 and have no strings attached as far as roster placements. We were going to post the list of players available on the minor league side until we found out that many of the players didn’t know their roster situation, since it’s not public knowledge. That would be a tough way to find out that a team thought empty spots on the Triple-A roster to possibly pick players were more important than losing you for a small fee. Since most of the 16 won’t be picked and remain in the system, we held off on posting the list. Without giving away any of those names, I can say that you might be a little surprised if/when some of those players are called today on the minor league side, but there are no top 50 prospects in the group.

The Pirates could lose some top 50 prospects today on the Major League side and pitching seems like the most likely spot. We have heard the names Tyler Eppler and Brandon Waddell tossed around as possible picks. If you follow our winter coverage, you know that three other pitchers have put up outstanding stats and they already had a small chance of being selected prior to their off-season performances.

Here are some quick thoughts on the most likely picks:

Tyler Eppler – Eppler has two years of starts in Triple-A and he pitched this winter specifically to help his Rule 5 case, although his first thought was to help his case to be added to the 40-man roster. He offers a team a player who can give them innings out of the bullpen and they wouldn’t really need to hide him in order to keep him all season. He’s big league ready, though the upside is limited to a fifth starter at best and more likely a bullpen arm that can spot start and pick up innings. Since he’s ready for that latter role right now, it’s possible that a team selects him.

Brandon Waddell – Waddell offers teams a lefty with a four-pitch mix and almost a full season of Triple-A experience. His upside is similar to Eppler, though he doesn’t have the experience yet to say he’s ready for that role right now. He has the advantage of being lefty and a reputation since his college days of being a big game pitcher, which makes him someone who might be able to thrive is a reliever role down the line.

Eduardo Vera – Vera only has Double-A experience, but he was quite impressive late for Altoona this year and then continued that trend against similar competition in winter ball in Mexico. He offers solid low-to-mid-90s velocity, a plus changeup and the ability to throw four pitches for strikes. He doesn’t miss a lot of bats, which keeps him from being ranked higher as a prospect, but he would probably be able to step into a middle relief role right now in the majors without hurting a team. He’s hit 97 MPH as a starter, so you could see more in shorter outings.

Elvis Escobar – Escobar has very little pitching experience because he was an outfielder his entire career, up until this past June. He is extremely advanced as a pitcher for someone who has been at it for just six months. Escobar sits 94-95, hitting 96 MPH, with a loopy curve and a nice changeup, throwing all three pitches for strikes. As a lefty, that’s a great three-pitch mix. He’s pitched well in Venezuela in a limited role this winter, facing much better competition than he was seeing in the minors. A team might dream on the potential today.

Gage Hinsz – This seemed highly unlikely a month ago, but if you have followed our winter coverage, you know that he is making a strong push and he offers the most upside of this group. Hinsz had a shoulder issue for most of the 2017 season, followed by open heart surgery this May. He’s been in Puerto Rico this winter, where he threw six shutout innings in each of his last two starts. In fact, he’s had one bad inning out of 25 total this winter. That’s coming from someone who only has High-A experience, but is facing winter lineups with as many as six players who have recent/current big league experience. He’s basically facing average and above average Triple-A lineups and dominating them after not pitching for a year. The fact that he has big upside makes him a player a team like the Orioles might take, where they won’t care that his current results would likely be poor, because it gives them a young pitching prospect.

Domingo Robles/Roger Santana – I don’t think either of these players is at risk at being selected, but I wanted to mention them anyway. Robles had strong results in Low-A this year, some High-A experience and he’s just 20 years old, with a frame that is still filling out, so there is potential. The problem here is that his prospect stock rose in 2017 when he was showing consistent low-90s velocity, but that speed dipped in 2018 down to the 87-91 MPH range, mostly 88-89 MPH. You don’t want to see a velocity drop from someone who is still young, so that should keep him from drawing interest. If a team only looked at his 2017 scouting reports and 2018 stats, they might be inclined to pick a young lefty. Santana added velocity this year, hitting 95 MPH, to go along with a plus changeup. That being said, he pitched at Bristol this season and had some rough outings, so that should eliminate him as a possible pick. He’s a young lefty though, so you can’t just say some team has no interest in someone with those two pitches. Let’s just say that either would be a surprising pick, but now you know what a team might see if that happens.

Christian Kelley – This is the only position player I could see the team lose of significance. A player like Alfredo Reyes could help a team right now in the majors as a 25th man due to his defensive versatility, which is strong at multiple positions, and his plus speed, but his bat isn’t big league ready now and may never reach that point. Kelley could step in as a backup catcher due to his defense. His bat isn’t big league ready either, but he has potential to be a solid backup in the future.

I don’t think any of the above players are likely to be picked. I’d give all of them individually less than a 50% chance, but with so many to choose from, it seems likely that one has caught the eye of some other team. Teams on average have a player selected every two years and with the amount of players who don’t stick with their new team, you’re losing a player once every three years. The player here you don’t want to lose is Hinsz, who you could safely say has proven that he is healthy, and he has the most upside. He might not end up as the best prospect in the group, but no one else has his potential.

We will post any possible rumors about the draft here. Sometimes names are mentioned as likely picks right before the draft starts.

As I mentioned, the Pirates have the 17th pick today and an open spot. Not every team makes a selection, so that 17th pick could turn into a much higher pick. Here are some names available from Baseball America and MLB Pipeline. The Pirates could have interest in Jackson McClelland. He was a 2012 draft pick of the Pirates, who they wanted to sign, but couldn’t due to the Mark Appel situation costing them bonus pool money. McClelland hit 101 MPH during the season and also in the AFL, where he was coached by Altoona pitching coach Bryan Hickerson. Just a name to keep an eye on, though some think he will be picked before the Pirates get a chance.

UPDATE #1: Pirates did not make a selection. They haven’t lost anyone yet…

UPDATE #2: Pirates didn’t lose anyone in the MLB portion of the draft. On to the minor league side…

UPDATE #3: Jordan George was selected by the White Sox in the minor league draft.

UPDATE #6: Pirates lose Rafelin Lorenzo, who was a minor league Rule 5 pick last year for the Pirates. Missed most of 2018 due to a bad cut on his hand.

UPDATE #7: Pirates passed on making a third minor league pick and didn’t lose anyone else. The draft is over. I’ll have quick thoughts on the new/lost players shortly.

In summary, the Pirates lost two minor league players and picked up two players. Winston Nicacio is far away from the majors, but at least sounds like he has some potential. According to that link, he gets his fastball up to 94 MPH and his two off-speed pitches have a chance to be average. Pirates have him for four years total of control.

Gassaway was rated as the 24th best prospect for the Orioles in 2016 by Baseball America. He’s 6’4″ with good bat speed, but that has never translated to power in the pros and he’s doesn’t offer speed or defense either. He’s a year away from reaching minor league free agency and he has just a brief stop in Double-A to his credit. If the power can translate to stats, then it’s a nice low-cost pick. Nicacio seems to be the higher potential here among the two new players.

Losing Jordan George won’t hurt the Pirates because his best position is at first base and they have Will Craig ahead of him, with Albert Baur able to step in to Altoona’s open spot. George is a great contact hitter who gets on base, but he doesn’t have any power, speed or defensive value to help his case. He may hit his way to an MLB bench job someday if everything goes right, but Albert Baur is basically a clone of his upside.

Lorenzo only hurts in the sense that the Pirates were already low on minor league catchers. It’s a bit shocking that they haven’t picked up one yet this off-season because they have lost a lot of them since the end of the year. They released four lower level catchers and Ryan Lavarnway and Jin-De Jhang left via free agency, while Jackson Williams is still a free agent.