Altoona Top Ten: A Team Loaded with Top Prospects in the System 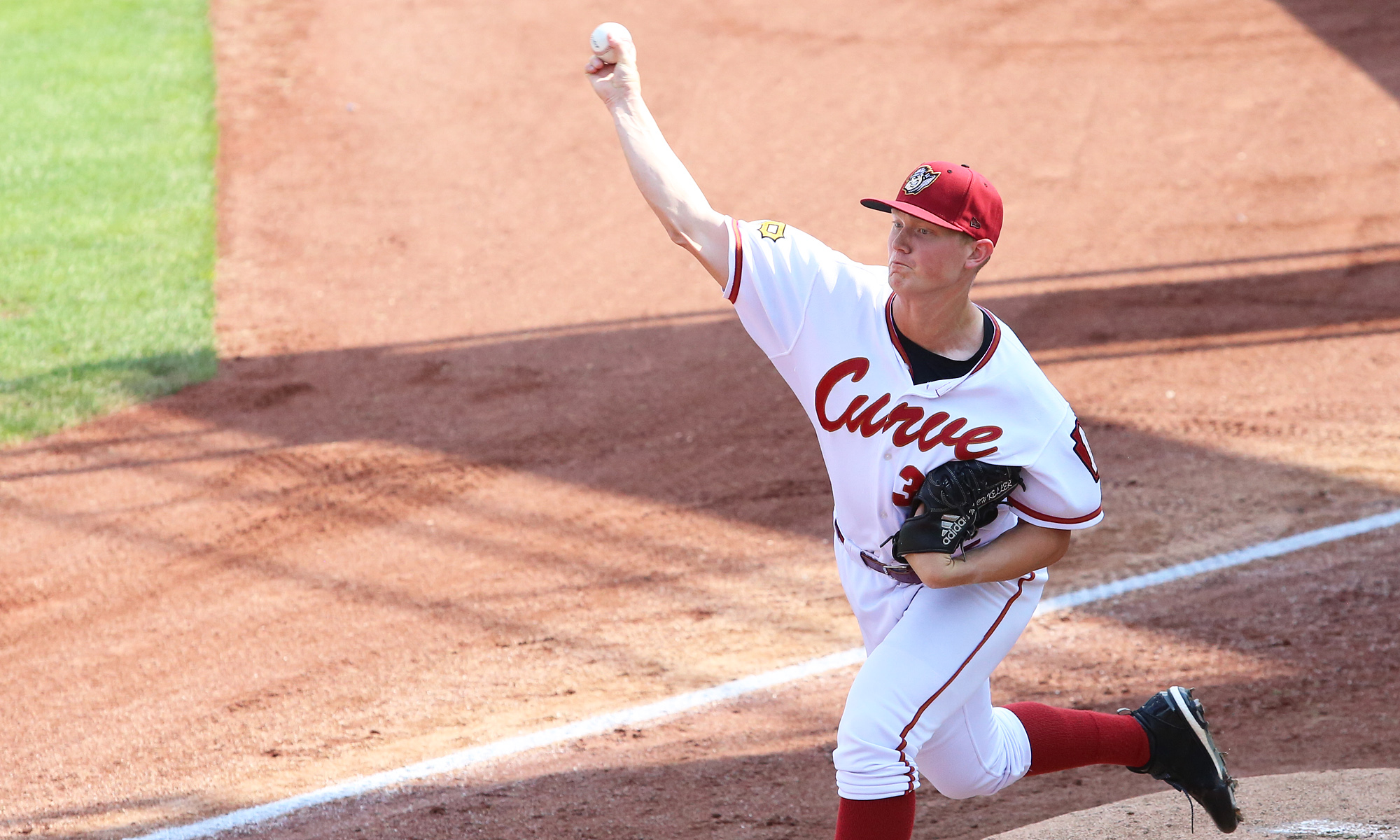 We posted the season recap for the 2018 Altoona Curve yesterday. Today we look at the top ten prospects from the team. For each of the first six top ten lists (see links below) we used the mid-season prospect guide for the rankings and we continue to do that with this list. More than ten players for Altoona made our mid-season top 50, so some decent prospects didn’t make the list below. Our next rankings update will be for the 2019 Prospect Guide.

To be eligible for this list, the hitters needed at least 140 plate appearances, while pitchers either needed 40 innings pitched or 20 appearances. The top three players of note who just missed qualifying were all pitchers. Luis Escobar and JT Brubaker fell just shy of reaching 40 innings. Escobar was in the top spot on our Bradenton list, while Brubaker will be on our Indianapolis list. James Marvel joined the team late and needed 1-2 more starts to qualify. Just like Escobar, Marvel was covered in the Bradenton top ten.

Christian Kelley and Cam Vieaux each made the mid-season top 50, but didn’t rank among the top ten prospects for Altoona. Vieaux put up a 3.59 ERA, a 1.10 WHIP and 72 strikeouts in 87.2 innings over 15 starts for the Curve. The 24-year-old lefty made the list due to improved velocity and a better strikeout rate, to go along with above average control. Kelley is a strong defensive catcher, who showed mild improvements at the plate by posting his best career OPS. We did not include Taylor Hearn because he is no longer in the system.

The numbers next to the names below are their current rankings on our top 50 prospects list. Some differ slightly from the rankings in our book, which is due to three of those players being traded and another player (Jordan Luplow) losing his prospect status when he crossed the 130 at-bats limit in the majors.

Before we get into the Altoona top ten, here are links to the previously released top ten lists:

1. Mitch Keller, RHP – (#1) Keller will also be on the Indianapolis list, so we will just cover his time in Altoona here. He got a jump on Double-A with a late season promotion last year, then got more upper level experience while playing in the Arizona Fall League. It was expected that Keller wouldn’t last long at this level in 2018, but early season control issues delayed his promotion to Indianapolis until mid-July. He made 14 starts with the Curve and finished up strong, posting a 2.72 ERA in 86 innings, with 76 strikeouts, a .206 BAA and a 1.12 WHIP. By the end of his time in Altoona, Keller showed everything that makes him one of the top pitching prospects in baseball. He had excellent control over a mid-90s fastball, with a plus curve and an improving changeup. He turns 23 years old days before Opening Day next year and could be in Pittsburgh by June if all goes well.

2. Ke’Bryan Hayes, 3B – (#2) A lot went right for Hayes this season. In the middle of the year, he played in the Eastern League All-Star game, then participated in the Futures Game. At the end of the season, he was named to the Eastern League postseason All-Star team and he won the Rawlings Gold Glove, which is given to just one player at each position in all of the minors. Hayes hit .293/.375/.444 in 117 games with Altoona, reaching career highs with 31 doubles, seven triples and seven homers. On defense, he posted a .978 fielding percentage, which led all third basemen in the minors. Hayes showed the ability to get on base, he drove the ball better than any previous season and his defense continued to be a plus tool, while he also added value on the bases. He has become a complete player, who still has room to grow. Hayes will be 22 years old next season and could make the majors by the middle of the year, depending on how well he handles the jump in competition.

3. Cole Tucker, SS – (#3) Tucker had a tough first half to 2018, then looked much better in the second half, showing why he ranks so high in the system. The 22-year-old shortstop was hitting .195/.285/.263 with no stolen bases through May 19th, when he started to turn things around. He had a .777 OPS after the All-Star break and managed to finish the season with 35 stolen bases. He topped off his season with two homers in the playoffs. Tucker didn’t have any issues on defense, where he has shown above average range, a strong arm and good hands. He is now in the Arizona Fall League, getting some extra experience before he makes the jump to Indianapolis next year. The all-around player we saw in the second half of this year has the ability to be a starting shortstop in the majors, so consistency is the big key here.

4. Bryan Reynolds, OF – (#11) Reynolds had to hit pause on his season after just four games when a broken hamate caused him to miss seven weeks. That’s an injury that usually saps power for as long as a year after the surgery, so expectations weren’t high after his return. Reynolds managed to show some power though, finishing his season with a .302/.381/.438 slash line in 88 games. He was playing mostly left field while Jason Martin (see below) was still on the team, but after Martin was promoted, Reynolds played a lot more center field. He attended the Fall Instructional League and is currently in the Arizona Fall League, where he is making up for some lost time during the season. While Kyle Crick had an excellent season for the Pirates and they still have control of him for five more years, Reynolds could end up being the key return in the Andrew McCutchen deal.

5. Jason Martin, OF – (#12) Martin will also be on the Indianapolis list, so we will just cover his time in Altoona here. During the first half of the season, there wasn’t a better hitter in the system. Martin was repeating Double-A, getting there last year while still with the Houston Astros. He played 68 games for the Curve before being promoted to Triple-A. During that time, he hit .325/.392/.522, with 27 extra-base hits. Despite the big stats, he struggled badly in Indianapolis. When he was tearing up the Eastern League, it appeared that the Pirates were holding him back. He needed to work on his defense in center field, which looked much better than pre-trade reports. Martin also needed to work on his base running (he went 12-for-24 in steals this year despite above average speed). So there were two big reasons not to rush him to Triple-A, and his stats with Indianapolis showed that the Pirates made the smart move by holding him back.

6. Will Craig, 1B – (#13) You can tell this is a strong prospect list when the team’s sixth best prospect is ranked 13th overall in the system. Craig earned that small jump in the rankings by showing a lot of power this season, while also improving his defense at first base, plus he is in much better condition. The downside to his power surge was that his OBP suffered. It wasn’t an all-or-nothing sell out for power, but the OBP dropped 52 points and his strikeouts increased. If he could somehow combine the power and on base skills in the same season, then he would be a much better prospect. Craig should be the Opening Day first baseman for Indianapolis next year, but before that happens, he will spend his fall in the Arizona Fall League, which will give him more at-bats against quality upper level pitching.

7. Brandon Waddell, LHP – (#23) Waddell will also be on the Indianapolis list, so we will just cover his time in Altoona here. This was the third season in Altoona for Waddell, although there weren’t any full seasons. In 2016, he began the year in Bradenton. In 2017, he missed time twice with a forearm strain. In 2018, he lasted just 53.2 innings before making it to Triple-A. Waddell had a 2.68 ERA with the Curve this year, with 43 strikeouts, a .206 BAA and a 1.08 WHIP. All four of those numbers are highly comparable to the stats that Mitch Keller put up in Altoona this year. The lefty Waddell is quite different from the top prospect though. He can get his fastball up to 94 MPH, but usually works in the 90-92 MPH range. He does an excellent job of mixing his pitches and he’s at his best when he attacks hitters and keeps the ball on the ground.

8. Dario Agrazal, RHP – (#24) Agrazal has not had an easy time in Double-A. He received a promotion from Bradenton during the middle of 2017 and suffered a strained pectoral muscle in his first outing. That injury ended his season. In May of this season, Agrazal suffered a shoulder strain that cost him two months. He had a 1.30 ERA in his first seven games, before allowing 11 runs in ten innings, indicating that he may have tried to pitching through the injury. After two rehab starts in Bradenton, Agrazal returned to Altoona and had a few nice outings before finishing off the year very poorly. In his final three games (last one in the playoffs), he surrendered 20 runs on 29 hits in 12.1 innings. Agrazal is currently in the Arizona Fall League, where he might just be pitching for his 40-man roster spot. His fastball was sitting 89-91 MPH in his debut, which was down from the 94-96 MPH he was at when he peaked in velocity and really made a name for himself. Between the lower velocity, injuries and poor performances, which could all be related, his prospect status has taken a hit.

9. Stephen Alemais, 2B – (#25) Alemais still might be the best defensive shortstop in the system despite playing just seven games there in 2018. The time at second base gave him  chance to play every day in Double-A this year, while adding versatility. That should help get him to the majors, where he should at least be a solid bench middle infielder due to his defense. Alemais played well at second base, earning top defensive honors at the position in a voting done by the league’s coaches and managers. He held his own at the plate as well, putting up a .279/.346/.346 slash line in 120 games. Alemais has limited power potential, but he has a solid approach at the plate and makes a lot of contact. He can add some value with his speed as well, but his calling card is the defense.

10. Eduardo Vera, RHP – (#30) You can tell the difference between Bradenton and Altoona this year just by looking at Vera. He was rated as the third best prospect on the Marauders, but just barely got on the Altoona list, and only because two players just missed qualifying. Vera pitched well in nine starts at Bradenton, then moved up to Altoona and had a few strong starts to begin his time in Double-A. That was followed by a couple of rough outings, including one game in which he took a line drive off his forearm and needed to go for x-rays, which turned out to be negative. Vera settled down shortly after that and finished off his season extremely well, while pitching in big spots. His last three regular season starts involved games in which the Curve clinched the playoffs and when they secured first place. In those games, he not only pitched great, he picked up his strikeouts, which was his biggest issue as a prospect. Vera finished with one run over eight innings in his playoff start. The most impressive part about his finish is that he was on the verge of becoming a minor league free agent. The Pirates were obviously impressed and they were quick to offer him a contract after the season. He is pitching winter ball this year in Mexico with permission from the Pirates, though they are limiting him to five-inning outings and only half of the winter.