The Pirates Have a Sixth Inning Problem

WASHINGTON, D.C. — Through a little over a month of baseball, the Pirates have been powered to a hot start by a hot-at-times offense and an about average pitching staff. But there’s really only one thing holding back the Pirates pitchers from being more than they’ve been.

The Pirates have a sixth inning problem.

It reared its ugly head on Thursday when Pirates starter Trevor Williams took a scoreless game against Washington into the bottom of the sixth, when he gave up two homers, one of the two-run variety, to give the Nationals all the runs they would need to sew up a 3-1 series-sweeping victory. Issues in the sixth inning have been something of a trend.

Pirates starters in innings one through five have a combined ERA of 3.79, which is good for 12th in the majors, and the Pirates’ starters have done a pretty good job of getting through five innings this season. The bullpen has thrown only 5.2 innings before the sixth all year.

When the Pirates starters get through the sixth inning, everything is gravy. The Pirates’ bullpen has a 3.53 ERA after the seventh inning, exactly 12th in the league. That lines up well with the team’s overall numbers. They have the 10th-best pitching staff in the league in innings one through five and the 11th-best staff in innings seven and beyond.

The tipping point, and essentially the whole reason the Pirates staff has numbers below average at this point in the season, has been the sixth inning.

Pirates starters have seen their ERAs increase by nearly three runs — from 3.79 in innings one through five to 6.75 in inning six — when asked to go a sixth frame. There hasn’t been a single pitcher that’s been immune. 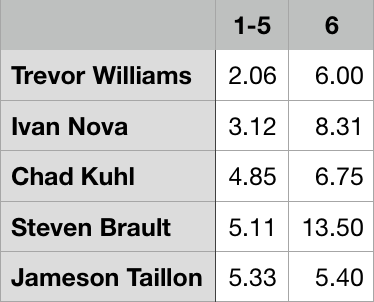 So the conclusion here is pretty obvious, right? Clint Hurdle needs to have a quicker hook if things start to go sideways in the sixth inning, right?

Not so fast. The Pirates bullpen has been even worse. The bullpen has a 12.15 ERA in the 13.1 times it’s been tasked to tackle the sixth inning.
So what is a manager to do? It’s obvious his starters need to be pulled quicker, but if he doesn’t have confidence in the bullpen to do any better is there a good answer?

“It comes down to pitch efficiency,” Hurdle said. “I think if we can be more efficient with out pitches, we can be in better shape. You get at 90 (pitches), there may be some emptiness in the tank. If you get (there with) a different number, there might be a little bit more strength.”

Williams was at pitch number 90 when the second Nationals home run left the yard on Thursday, and though he said it was just a pitch that he left up, there’s no doubt that pitchers are less crisp at the end of their pitch limit than they are at the beginning.

This is where the Pirates’ emphasis on throwing two-seam fastballs and hunting weak contact, which has been much derided this season, comes into play. It doesn’t matter if a pitcher can strike out every batter they face if it takes them 85 pitches to get through four innings and the inconsistent front part of the bullpen has to come in early in the game.

That part of the equation will also be helped by moving Brault from the starting rotation to the bullpen. Brault was the pitcher that was having the most trouble in the sixth inning. Brault will help stabilize the early part of the bullpen, where Kyle Crick and Richard Rodriguez have done well since being recalled, as well.

Also, part of the bullpen’s total ERA is inflated by the fact that Tyler Glasnow somehow has a 33.75 ERA in the 2.2 times he’s worked the sixth. Glasnow hasn’t been used as a situational reliever and wouldn’t be the option to go to if Hurdle wanted to make a quicker hook, anyway.

Whether it’s getting more pitch efficient outings from starters or having someone in the bullpen step up as a reliable option, finding a solution for the sixth inning seems to be the only thing holding the Pirates back from having an above-average pitching staff.