PITTSBURGH — The evolution of Chad Kuhl found a new step on Saturday at PNC Park in the Pirates’ 2-1 loss to the San Francisco.

On May 31, Kuhl introduced a curveball as a secondary pitch that could help hitters from sitting on his primary offering, a two-seam fastball. On June 15, Kuhl completely abandoned his old approach, leaning on his four-seam fastball instead of the two-seamer.

Saturday against the Giants, Kuhl seemed to have it all figured out for the first time. He had the two-seamer working, the four-seamer working and the sinker, with his curveball mixed in a good bit.

Kuhl had a no-hitter working into the sixth inning, he completed each of his innings with 15 pitches or less and had thrown just 75 when he was pulled for a pinch hitter in the bottom of the sixth.

It’s just one start, but in the process Kuhl is going through — completely revamping his game at the major-league level — it represented an important step. Kuhl now has a blueprint of exactly the way things should look when he’s on his game. That’s not something he had before.

“It’s huge being able to throw the curveball and the four-seamer and get that feedback,” Kuhl said. “It feels really good to get the results finally.”

Elias Diaz has been catching Kuhl pretty regularly for the last season and a half. He’s never seen Kuhl quite like he was on Saturday.

“Amazing,” Diaz said. “(His fastball) was good down in the zone. Two-seam, four-seam, slider, everything was in play.”

“Nobody told him it was (a big start). I think every start is important. He knows what the situation is. He wants to pitch deeper into games. He put himself in a situation to do that today.”

SUCCESS AGAINST THE LEFT

Included in his successful start was a great night against left-handers, which have given Kuhl fits this year. The Giants rolled out five lefties and they went 1 for 11 against Kuhl with one walk and one strikeout.

“Just a nice mix of pitches with plus velocity and he moved the ball around extremely well,” Hurdle said. “No copycat sequencing.” 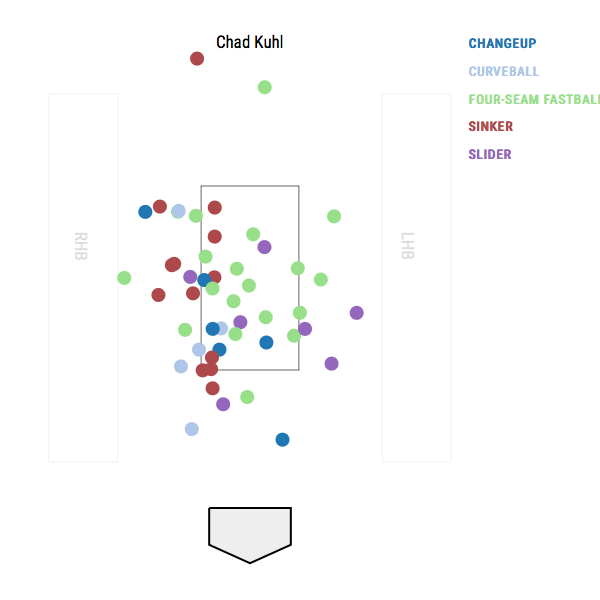 That’s Kuhl’s pitch chart against left-handed hitters and the pattern there is that there isn’t one. He threw all five of his pitches. He threw the two-seamer, change and the curveball away, the four-seamer and the slider to both sides of the plate.

When Kuhl came up, he hammered his two-seamer to the same part of the plate over and over and over again. Now, he’s become a pitcher with a much wider arsenal that is much less predictable.

The Pirates walked 10 times and left 15 men on base. Twice, they left the bases loaded, with catcher Elias Diaz the culprit both times.

“We put them out there every inning, just about,” Hurdle said. “At the end of the day, it’s all about scoring runs. We worked to get out there, but we weren’t able to get them in today.”

In the 11th inning, Daniel Hudson’s wild pitch got past Diaz and let Denard Span score the winning run. Hudson was trying to be careful with Giants slugger Buster Posey and keep the ball down, but ended up being a little too careful.

Andrew McCutchen went 1 for 4 with two walks and had his streak of reaching base run to 10 straight plate appearances before breaking it in the fifth inning. … Max Moroff went 0 for 5 and popped out a bunt attempt in the 10th inning. … Gregory Polanco went 3 for 4 with a double and a walk.