But Moroff came through in the 10th inning with a walk-off RBI single as the Pirates came back to beat the Milwaukee Brewers, 3-2, and climb to four games back in the NL Central standings.

It seemed unlikely that Moroff would come through to be the hero given his track record. But Moroff is building something of a hot streak despite limited opportunities. He’s hit in three straight games, going 3 for 9 over that span. It’s a minuscule sample size, but that’s what a part-time player at the bottom of the bench is going to get. If Moroff was going to find a way to turn it around at the major-league level, he was going to have to find a way to thrive in a reduced role.

Some of it was bound to come eventually, anyway. Moroff had an atypically low .147 BABIP in the majors coming into Wednesday. A speedy runner, he’s finished over .300 in all but one of his minor-league season. But there’s more to it than just regression to the mean.

When Moroff first got called up from Indianapolis, one of the last things he had been working on in the minors was changing his approach with two strikes. Moroff had a career-high 25 percent strikeout rate with Indy this season, and it has increased to 30 percent in his brief time in the majors. The two-strike approach remains a work in progress, but he used it from the get-go in a big spot in the 10th inning Wednesday and found some success with it.

Moroff said he’s standing with a bit of a wider base and choking up a little more than usual in those two-strike situations, but it also makes sense for spots like the one he was presented with on Wednesday, with the winning run only a single away.

Moroff does posses some power. He hit 13 home runs in Indianapolis this season and was slugging .569 at the time of his call-up. But with most of his chances coming in late-game situations as a pinch-hitter, he might be best served to go with his new two-strike approach more often.

Moroff continued the string of Pirates walk-off hits with their third of the homestand. Moroff talked about the experience and being able to follow former longtime minor-league teammates Josh Bell and Adam Frazier in doing so.

Moroff wasn’t the only Pirates hitter with a recent mechanical adjustment that made a big impact in the 10th inning. Josh Harrison came through with a one-out double to start the rally. Harrison has been mired in a month-long slump. Coming into the game, he was hitting .140/.204/.260 in the month of July.

Again, he’s been a victim of a low BABIP — just .132 in that span — but Harrison thinks he found something that was messing with his timing during an off day on Sunday and has put it into play successfully since then.

He went 3 for 5 on Wednesday after hitting a two-run home run on Tuesday and feels like his swing is right back where it needs to be.

“I feel good,” he said. “The adjustment that I made, I could feel it instantly. It’s helping with putting my body in a spot to get my swing off the way I want. I’m trying to make good swings and get good contact.”

OTHER SIDE OF THE COIN

His last two starts, Gerrit Cole got squeezed a good bit by the home plate umpire.

As a result, he wasn’t able to get many swings and misses on pitches just out of the zone. Wednesday, Cole saw the other side of that coin, as a favorable strike zone, compared with pinpoint fastball command, allowed him to strike out ten Brewers — six of them looking. 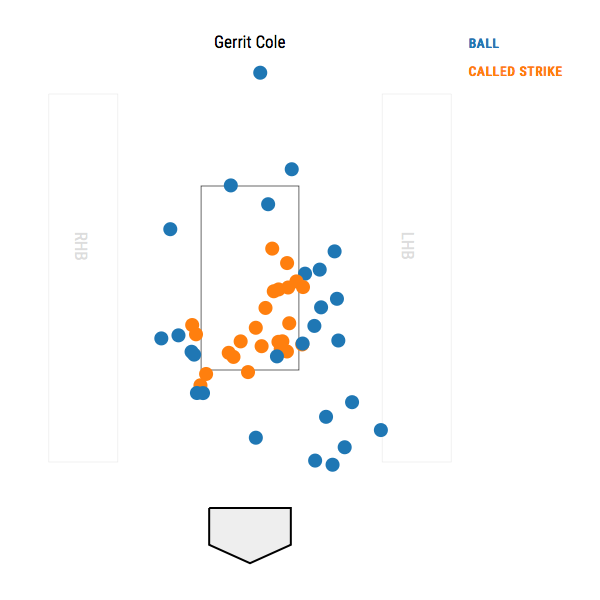 “We were just able to execute pitches, throw through each batter and pitch around some singles,” Cole said. “(Catcher Francisco) Cervelli had a good game plan and kept them off-balance.”

The fastball command was particular noteworthy for manager Clint Hurdle.

“It was electric, for me,” Hurdle said. “Firm velocity. He hit his spots. Aggressive, he went after people. This team is dangerous from top to bottom. If you can get them swinging, you can work it to your advantage. He threw so many strikes, they had to get ready to hit.”