The Book on Edgar Santana

The Pirates called up Edgar Santana today, addressing their current bullpen issues by adding the top relief pitching prospect in the system. Santana has electric stuff, with a fastball that sits mid-90s and touches upper 90s with movement, and a sharp slider that is a plus offering and a strikeout pitch. He’s a future late inning reliever, and might not need much time in the big leagues to reach that point.

These aren’t usually things you say about a guy who is 25 years old, but Santana’s age comes with the disclaimer that he’s only been playing baseball for about six years, and made his pro debut in 2014. Since then, he made a meteoric climb through the system, going from the Dominican Summer League to the majors in three years. We don’t typically do a “Book” article on relievers, but Santana is such a good prospect that he warrants a close look. So here is The Book on Edgar Santana.

Where Did Santana Come From?

Santana has an unusual career path, and a limited history in the game. Most stories of players making it from the Dominican Republic include notes that the player had been scouted since he was 11 or 12, had signed a pro contract around ages 16-18, and spent many years in the minors moving up through the system before arriving in the big leagues. None of this is the case with Santana.

No one in his family had played baseball, so playing the sport at a young age just wasn’t something he did. Rather than signing a contract at ages 16-18, he was expected by his family to go to college. Brian Peloza had a great article today looking at his unique introduction into the game, and how a trainer noticed him. In the first tryout, he hit 85 MPH. The trainer insisted he keep pursuing a career, and that started his late introduction into the game.

He was eventually signed two years later by the Pirates after adding some velocity. His move through the system was aggressive, to say the least. He threw 19.2 innings in the DSL in his rookie season in 2014. The next year he saw an aggressive push to Morgantown — skipping over the GCL and Bristol — and after some success at the level he moved to West Virginia at the end of the year.

He really broke out as a prospect last year, starting off with Bradenton, but moving up after nine appearances. He went to Altoona for 41.1 innings, then moved to Indianapolis at the end of the year. After going to the Arizona Fall League last offseason and dominating the prospect-heavy league, he returned to Triple-A this year, where he has been lights out. Santana currently has a 1.93 ERA in 32.2 innings, with a 31:7 K/BB ratio, prior to his call-up.

What makes Santana such a great relief pitching prospect is his fastball. The pitch sits in the mid-90s, touching the upper 90s, and featuring a lot of movement. It generates a good amount of ground balls, at 58% last year, and 48% this year in Indianapolis. The pitch also puts Santana ahead in the count consistently, even though he uses it to pound the strike zone.

One issue the Pirates have been working on with Santana is his tendency to try and blow it by other hitters and over-throw. He will try to put a little extra on certain pitches, which really isn’t necessary, and will get a little out of control. You can see this a bit in his follow-through, which isn’t very controlled at times. 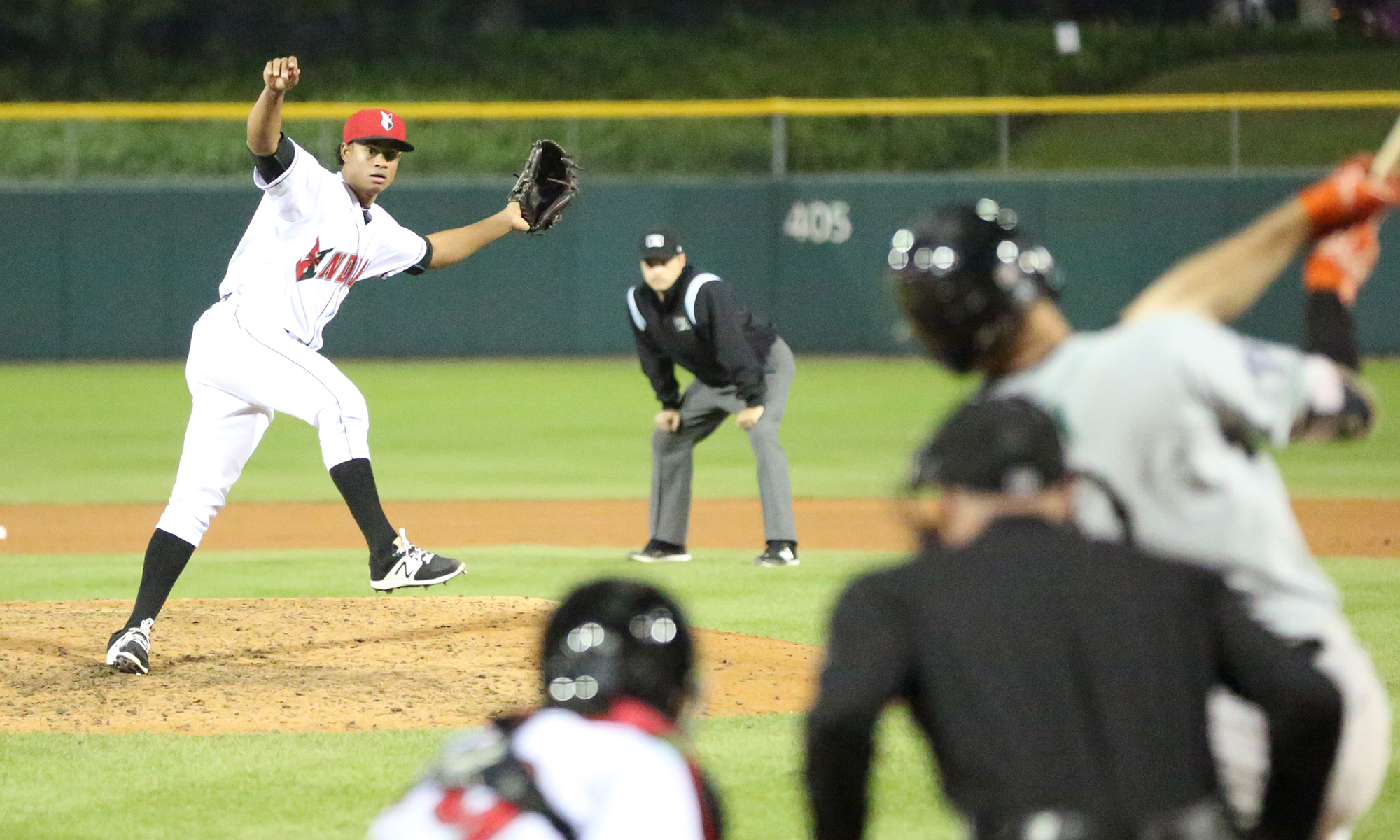 This hasn’t led to many issues in the minors, but if Santana comes up and thinks he needs a little extra to get big league hitters out, it could lead to him trying to over-throw, and getting a bit wild in the process, leading to worse results than he saw in the minors. His stuff is good enough to get outs in the big leagues. If he realizes that, he will have success right away.

All of this said, the mentality from Santana to want to blow it by opposing hitters is exactly what you want from a late inning guy. He’s got your typical closer approach, paired with the stuff that makes that approach dangerous.

Santana learned the slider in his first year with the Pirates, and saw instant results with the pitch. It has turned into a plus offering, showing sharp tilt and a hard break, pairing nicely with his fastball. Even when hitters know it’s coming, they can’t do anything with the pitch.

I watched Santana in the AFL last year getting to two strike counts. I sat in the stands, predicting the slider was coming next, and sure enough he would throw the pitch and get the batter chasing. The same thing happened last month when I saw him in Indianapolis. He would get to two strikes, then go with a slider that would start in the zone, and run low and away for a swinging strikeout. Santana can throw the slider for strikes as well, so it’s not as easy as just laying off the pitch. It also comes out of the hand looking like a fastball, adding deception, and making it difficult to lay off the pitch.

Santana has also worked on throwing a changeup in the last year, but he really only needs the fastball and slider to have success as a reliever in the big leagues.

What is Santana’s Upside?

It’s interesting that the Pirates brought Santana up on June 10th, since this is right around the time that teams call up players to avoid Super Two status. You typically don’t worry about Super Two with relief pitchers, since they don’t provide as much value as a position player, and don’t make as much money. However, there could be an argument for holding a reliever back if you think he can be elite right away, and you think he could be a closer in his early years, as saves are paid very well in arbitration.

I’m not saying I agree with the approach. I felt Santana should have been up in April, just after enough time to gain an extra year of control. We also don’t really know if the Pirates were waiting for the Super Two date to pass in this case. That said, I don’t think it’s a coincidence that Santana was called up at this point, and I think it all points to how high the Pirates are on his upside and potential. That upside would be a late inning reliever, with a chance to be an impact closer.

It’s hard to say how quickly Santana will adjust to the big leagues, although his fastball/slider combo does give him the weapons to have instant success. It’s also hard to say how quickly the Pirates will move him to a late inning role, although with the current issues they have now, he could move quickly to that spot if he has instant success. Santana’s upside would be a dominant late inning reliever, and when paired with Felipe Rivero, he could give the Pirates one of the most dangerous lefty/righty bullpen pairings in the game for several years.