After two months of the season, the vast majority of us were just about ready to give up on Andrew McCutchen, accepting the seemingly inevitable notion that Cutch is no longer Cutch.  In fact, you’ve likely read narratives outlining his mysterious and precipitous decline or his evaporating trade value for the last month, and rightfully so, because McCutchen’s season has been downright disastrous this far.

Yet, it wasn’t long ago that McCutchen, in the wake of a flurry of trade rumors, proclaimed, “I’m going to have a monster year, whether it’s in Pittsburgh or somewhere else…it’s going to happen.” It was precisely the competitive, chip on the shoulder attitude that we wanted to hear from McCutchen after a dismal 2016, but unfortunately, he’s fallen well short of his claims.

As such, Clint Hurdle decided to try and give McCutchen time to reset, resting him for two games last week (with the exception of pinch-hitting duty).  And he’s come out looking more locked in than we’ve seen in quite some time as he’s slashed a robust .346/.486/.654 over the last eight games.  Of course, the question of concern is whether he can keep the momentum going or if he’ll simply settle back into the player he’s been for the past two months.

McCutchen is a risky guy to bet on moving forward, but throughout this piece, what I would contend is that there is much more reason for optimism about this season than last; I’m certainly not looking to deny that decline has happened or suggest that he’ll restore his trade value, but he’s still capable of being a quality player even if his star has faded.

Patience at the Plate

From the moment McCutchen stepped into the league, he’s displayed an uncanny ability to control the plate, limiting strikeouts and drawing frequent walks.  Even though that hasn’t changed in comparison to league averages, he went from upper echelon plate discipline to average or below last season.  That’s not the story this year. 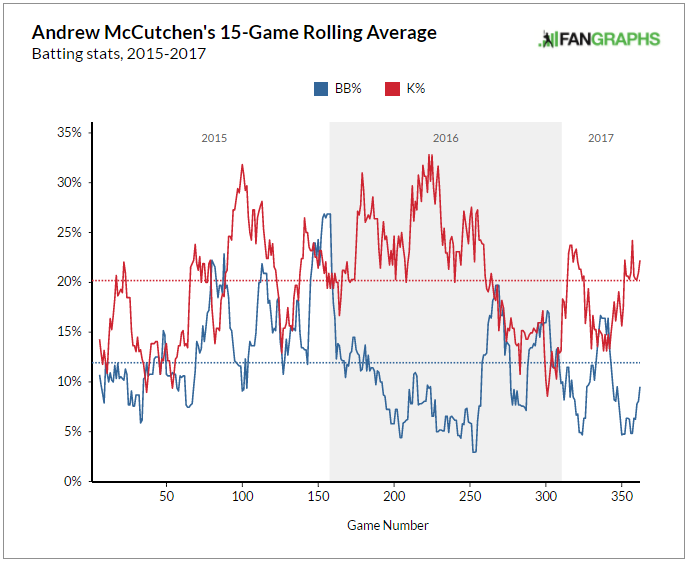 As you can see in this chart, there was a massive gap between his walk and strikeout rates, suggesting McCutchen was absolutely dominated at the plate for most of 2016; however, this season there appears to be a much healthier picture.  The walks are down slightly from past years, but the accompanying reduction in strikeouts have him resembling the player we saw protecting the plate in 2015.  If we examine his corresponding plate discipline numbers, we’ll see that there is more substance than fluff, leading us to believe he’s refined his approach. 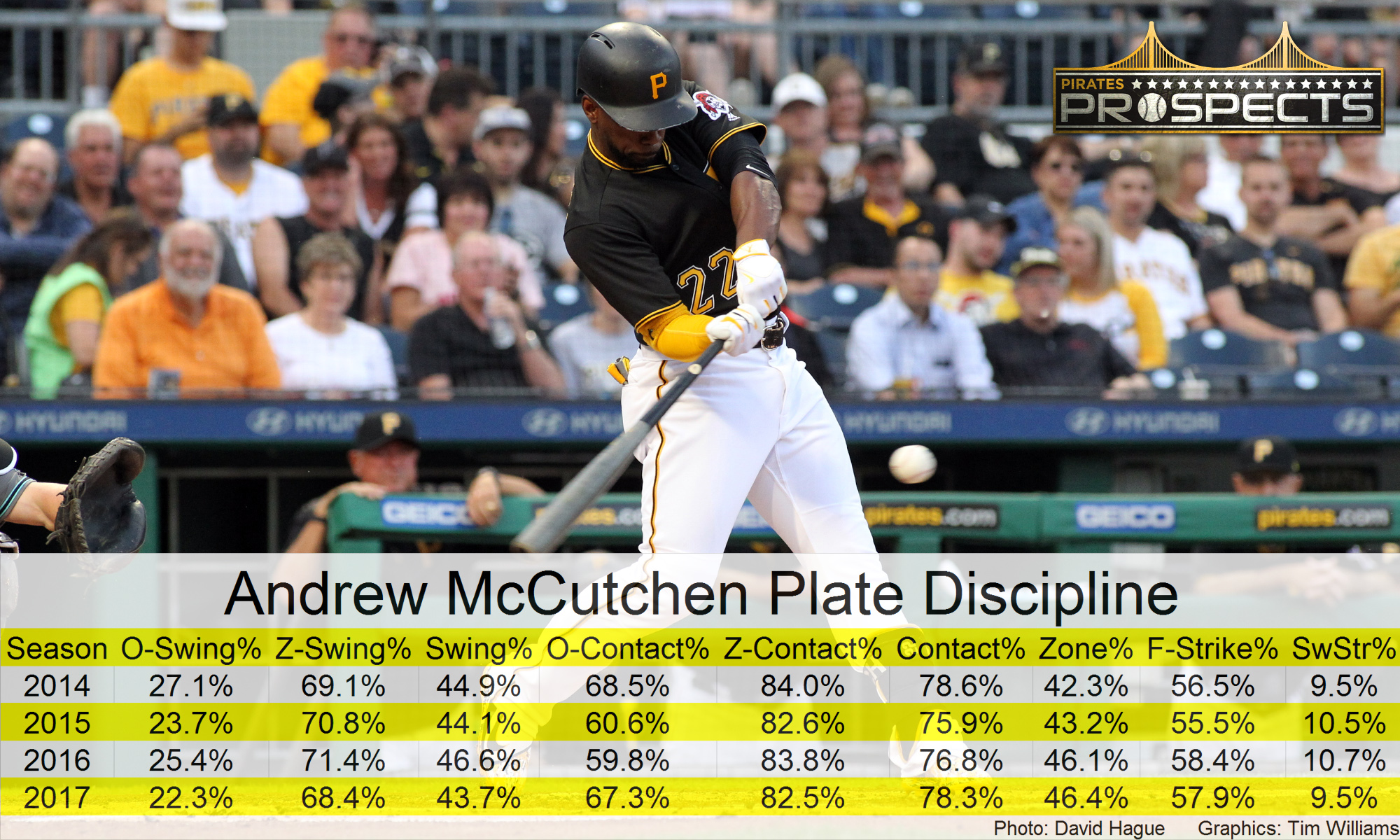 Additionally, a crucial aspect in the evolution of a hitter is his ability to let certain pitches in the zone go by as he awaits a mistake or ball thrown in a preferred area.  That being said, it has not been perfect for Cutch, but he’s still sitting a much better position than he was during a huge chunk of last season.We’ll approach this pretty straightforwardly with a couple of succinct observations. First of all, McCutchen is swinging less this season than last.  The encouraging side of this is that he’s chasing fewer pitches outside of the zone, and to be honest, it’s not bad that McCutchen is swinging at slightly less in the zone because it is on pace with where he was in best seasons.

Secondly, it’s also been an auspicious start in terms of contact outside of the zone; he’s not been Vlad Guerrero when it comes to quality contact on bad pitches; however, he is connecting with the ball more frequently than he has in the previous two seasons.

The first observation is a measure of how discerning an eye McCutchen has displayed, and the second observation is dependent not only on the first, but also on a player’s mechanics and bat speed.  Thus, the notion that his bat speed is declining is a bit overblown; it has as Statcast reveals, but it isn’t below replacement level like his offensive production would suggest.

Of course, the quality of contact has clearly been an issue for McCutchen, and while the .243 BABIP tells us he’s been the recipient of some poor fortune, his xBA  of .301 on batted balls in plays gives us more of an idea of how drastic that has been.

Now, Alan Saunders already mentioned that one of the problems McCutchen had in terms of contact was that he has been trying to pull too many balls.  I’d recommend reading the entire piece, but he summarized it here, saying: “When a hitter attempts to pull a ball pitched to the outside, it results in the hitter rolling the ball over. That’s happened a lot to McCutchen this season, especially compared with 2016. Remember that 2016 was a career-low for him, which makes the decline in outcomes to this season even more troubling.”

To provide an additional look into his batted ball profile, let’s explore one of the more interesting graphics available from Baseball Savant, the radial chart.  It depicts both launch speed and exit velocity in a graspable breakdown of the types of contact, (e.g. barrels, flares, etc.), which gives us a more precise look than Fangraphs batted ball data.  Here are the radial charts from each of McCutchen’s past three seasons:

Obviously, barrels and solid contact are what hitters are the ideal types of contact, so lets look at the breakdown. In 2017, McCutchen is already on a better pace with strong contact, hitting “barrels” or “solid contact” on 14.5 percent of batted balls compared to just 12 percent last season. To put that in perspective, McCutchen and is 146 wRC+ in 2015 had a 17.2 percent rate.

If you add flares and burners to the mix, this pushes McCutchen’s decent to strong contact to a very palatable place at just over 40 percent. In 2016, that rate was roughly four percent lower, but in 2015, he was only at 41.7 percent.  All of that suggests that McCutchen has been swinger closer to the 2015 form than the 2016 in terms of quality of contact.

Last season, McCutchen’s problem in contact stemmed from getting under the ball too often, but this season he’s stumbled into the opposite problem in a form of a possible over correction that has him topping an inordinate amount of balls.  It, along with a bit of extra weakly hit balls, is what’s driving McCutchen’s average exit velocity down.

The crux of McCutchen’s issues with weak contact and topped ball is what Saunders alluded to in the full aforementioned piece — McCutchen’s hip rotation and hands being out of sync, which is something Adam Berry also iterated prior to cutch taking a day off, writing, “It might be imperceptible on video, but McCutchen can feel it in the batter’s box, and see it in the number of balls he’s hooked. He is turning his torso more than usual, so his quick hands aren’t synced up with the rest of his body.”

Berry called the mechanical flaw “virtually imperceptible,” so I took some time this past week to watch a number of McCutchen’s swings from 2014 compared to this season.  I also took some time capture stills of the video feed to try and compare to see if there was something significantly different going on, but I’ll let you be the judge before I delineate a bit more.

They weren’t joking about that barely perceptible language;  McCutchen’s stance and swing look nearly identical from load to launch;  he lifts his front foot a little higher now and then but not consistently.  Overall, it does look a bit slower and a little less synchronized, but that might not be much; however, it’s not hard to believe McCutchen when he says something is off.

As I watched Pirates game against the Mets on Saturday, one of the Fox analysts mentioned in the second inning some commentary from Clint Hurdle about what was plaguing McCutchen’s swing; he called it “cranking.”  Essentially, cranking refers to McCutchen’s tendency to bring his back elbow too far back as he loads, causing him to fall behind in his swing or be pressed to swing earlier. It may seem like a minor thing, but if your timing is off, everything is going to be off as a hitter.

“It is a lot easier to say certain things as opposed to actually doing them,” McCutchen told the media last Friday when speaking of the issue. “As long as I know what I am doing and fixing that, that’s half the battle. Last year, I felt like I didn’t know what I was doing and I didn’t know how to fix it and I was just question mark. Honestly I didn’t know what to do. Now, it’s like, ‘OK, I see what’s going on.’

Well, immediately after that breakdown on “cranking” on Saturday, McCutchen jacked a home run off Zach Wheeler for the first of four extra base hits in his return from rest. Perhaps, McCutchen will recapture even more of the 2015 offensive form as he continues to refine his swing, so despite the myriad of concern and panic, don’t give up on McCutchen just yet.