PITTSBURGH — Despite last night’s disappointing loss, J.A. Happ’s performance continued to signify that the Pirates’ rotation is in a good place. It wasn’t long ago that there were legitimate questions about that starting rotation heading down the stretch.

There were questions whether Gerrit Cole and Francisco Liriano were starting to wear down as their inning totals climbed to personal uncharted levels. There were even bigger questions as to who would slide into the third and fourth spots of the rotation, as A.J. Burnett was on the DL and Jeff Locke, Charlie Morton and newly acquired Happ continued their inconsistent pitching.

Fast-forwarding to the present, these questions have all definitively been answered. The Pirates staff has the fifth best ERA (3.64) in baseball and are tops in the league in FIP (2.97) during the month of September.

Happ continued his remarkable renaissance last night, lowering his ERA to 2.04 since joining the Pirates. He has comfortably etched his name into the playoff rotation.

The final question was Burnett, who continues to improve with each start since returning from the disabled list. In his last start against Chicago, Burnett made it through six innings for the first time since his DL stint, and remained sharp as his pitch count reached 100.

The Pirates have the pieces necessary to make a deep playoff run – they have their ace in Cole, a great pitcher in Liriano who can pitch at an ace-like level, and two additional dependable starters that can provide them with quality innings and keep the team in the game. Of course, they would need Cole to step up and allow them to get past Jake Arrieta and the Cubs in order to make such a run.

This is not the norm with the National League playoff teams. Besides the Mets, the other clubs all have question marks. The Dodgers have Greinke and Kershaw, but are struggling to find dependable third and fourth starters. It’s a similar story for the Cubs, who have Arrieta and Lester, followed by inconsistency. The Cardinals have recently lost RHP Carlos Martinez for the season, and will have to pitch Lance Lynn in their likely trip to the division series – Lynn has struggled against both the Pirates and Cubs. 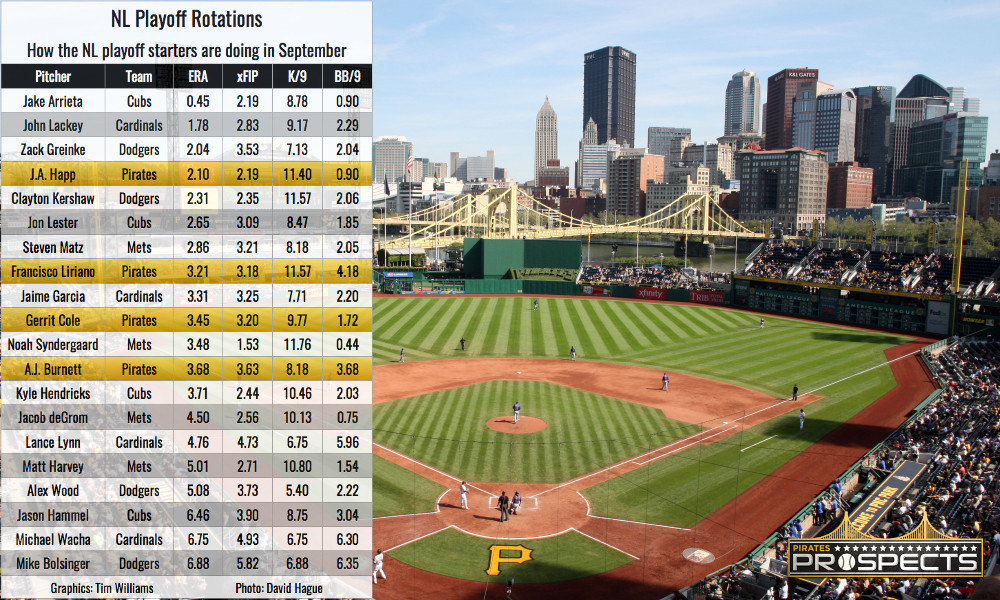 If the Pirates do end up facing the Cardinals in the NLDS, they will have some favorable match-ups on their side. Liriano has a 2.60 ERA in 69.2 total innings since 2012 against St. Louis, while Happ has pitched 13 scoreless innings against them this season. Cole has also had success in his short career against the Cardinals – a 2.96 ERA in 45.2 total innings.

Getting to the NLDS will be difficult, since the Pirates have to go through the best pitcher in the NL playoffs to get there. But if the Pirates reach that point, their rotation is set up to do some damage against the Cardinals and other NL playoff teams in October.