As you know, Mark Melancon broke the franchise record for saves in a single season by recording his 47th save in a 3-2 victory against the Dodgers on Saturday night. It’s a deserving achievement for the Pirates’ relief ace, who has proved to be as consistent and reliable as any reliever in baseball since joining the Pirates prior to the start of the 2013 season.

Essentially, over the last three seasons, Mark Melancon has been equally as effective as Aroldis Chapman and Craig Kimbrel, but at a lower cost. The trade that brought him to the Pirates in December 2012 — along with along with Ivan DeJesus, Stolmy Pimentel, and Jerry Sands for Joel Hanrahan and Brock Holt — neatly demonstrates the effectiveness of a buy low, sell high strategy.

Though he began his Pirate career as the primary set-up man for closer Jason Grilli, Melancon has moved into the closer role for most of the last two seasons. In the same timeframe, the Pirates have found similar performance and consistency from another shutdown reliever: Tony Watson. 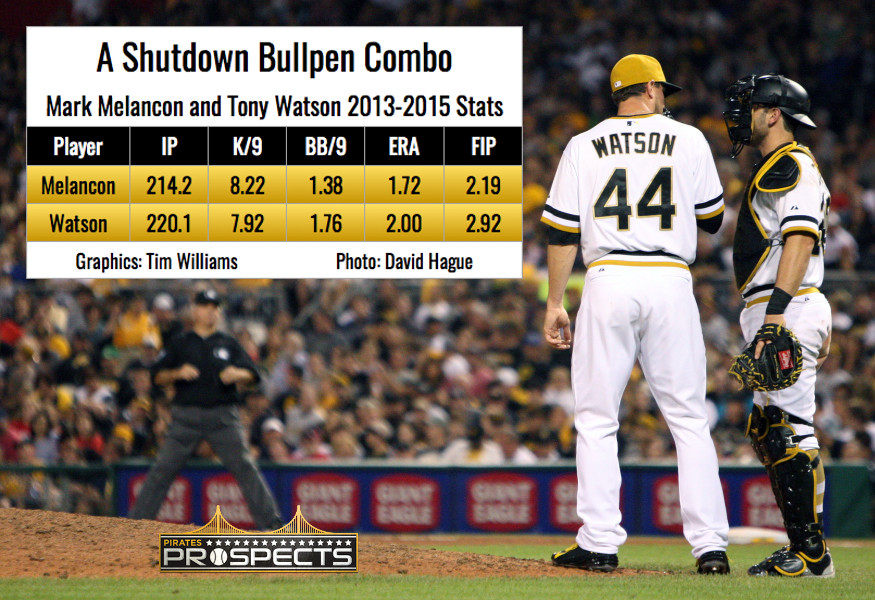 By the traditional numbers, the Pirates have two of the best relief pitchers in the NL anchoring the back-end of their bullpen. Looking at some contextual and more sophisticated numbers yields and even more compelling picture.

Since the start of the 2013 season, only the Marlins have played more one-run games (165) than the Pirates (164), and only St. Louis has as high a winning percentage as the Pirates (.579) in such games. Melancon and Watson have had to throw many critical innings over the course of the last three seasons, and their average leverage index when appearing (1.86 and 1.59, respectively) are among the 15 highest for qualified NL relievers.

As we saw when looking at bench players, a useful measure of performance in late-game appearances is to consider Win Probability Added. Fortunately, WPA can be distilled into two simple stats for relief pitchers that capture how their outings impact the game, in terms of delivering a shutdown (good) or meltdown (bad).

In the last three seasons, no other NL* relief pitchers have been better at securing shutdowns while dodging meltdowns than Melancon and Watson: 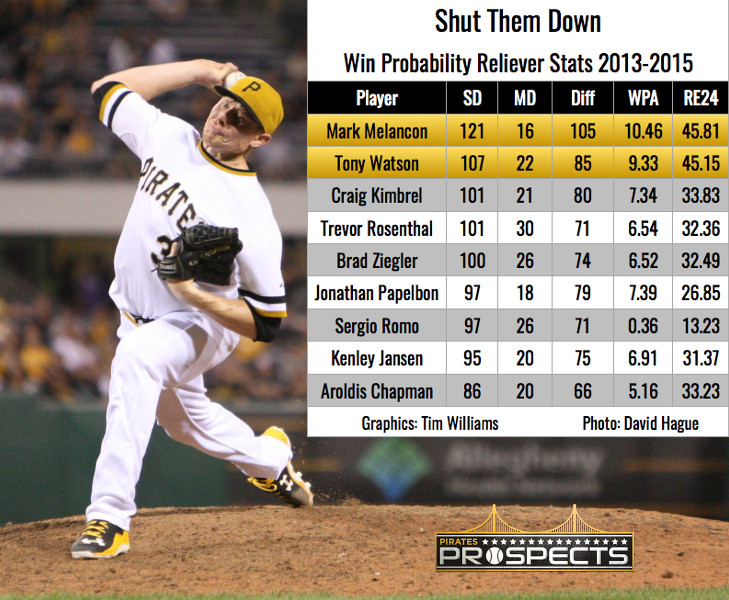 *In case you’re wondering, I generally prefer to keep comparisons between teams and players limited to the leagues in which they play. The AL and NL have fundamentally different scoring environments, so it’s best to keep comparisons separate unless you’re a metric that adjusts for the differences between leagues. For what it’s worth, Melancon and Watson lead all of baseball in shutdowns during this span.

What this table reflects are Melancon and Watson’s effectiveness in the many high-pressure situations in which they’ve pitched. Again, these numbers are dependent on context and opportunities, so considering other numbers like strikeout and walk rates — in which they also rate highly, as we saw above — is important.

Their usefulness to the Pirates is self-evident: not only do Melancon and Watson have good underlying peripherals relative to the best of their peers, but they have been able to consistently execute their game plans, particularly in the most stressful of situations.

How unusual are they?

It’s not particularly strange for a team to have two excellent relief pitchers. As the 2014 Royals demonstrated, having an elite bullpen can help secure additional wins because of their outsized effect on close games.

Essentially, Melancon and Watson have provided elite numbers in our three-year sample, but not historically elite performance. Even other NL teams have found strong production from two relievers over multiple seasons. The Dodgers (Jansen/Howell), Phillies (Papelbon/Giles), and Nationals (Storen/Clippard) serve as recent examples.

But if we look at wins above replacement, only the Pirates and Phillies have seen two players produce at least 3.0 total fWAR out of the bullpen. Melancon (6.0) and Watson (3.4) rank 4th and 8th, respectively, while Giles (3.7) and Papelbon (3.6) are 6th and 7th.

When we look at Baseball-Reference’s version of WAR, which includes a leverage adjustment, Melancon and Watson are two of only five NL relievers to produce at least 6.0 total bWAR over the last three years.

As we saw above, adjusting for game context is helpful to Melancon and Watson, but it’s telling that their neutralized performances look good as well. Either way, the Pirates have been very fortunate to have two of the eight best relief pitchers in the league inhabiting their bullpen at the same time.

It’s also worth noting that among relievers in franchise history, Melancon and Watson have established themselves as two of the best, especially within the current era of bullpen usage.

While neither will reach the relief innings and appearances totals of Roy Face or Kent Tekulve, by total fWAR as a Pirate reliever, Melancon ranks 3rd and Watson ranks 11th. If you consider bWAR and include the adjustment for leverage, Watson moves up to 5th, and Melancon ranks 7th.

This consistency in performance and execution have served Melancon and Watson very well in their Pirate careers. Both are due a raise through the arbitration process, but the Pirates have been fortunate to find such strong production at the back-end of their bullpen at a cheaper cost relative to their peers.

Also, the comparison to other NL bullpens cuts somewhat against the narrative that relief pitchers are fungible, and that teams can simply “mix and match” arms to get solid performance on a year-to-year basis. That approach may work for average bullpen help, but finding consistently effective pitching in high leverage situations is certainly not easy.

As we consider Wednesday night’s clinching game, an important slice of the credit for making three consecutive playoff appearances goes to this relief duo. One hopes they get a chance to show what they can do during a championship run in this postseason.