A Realistic View of Mark Melancon’s “Struggles” as the Closer

Last night the reaction I received on Twitter was surprising following Mark Melancon blowing the save. Here was the situation:

**Charlie Morton gave up one run in eight innings and was at 99 pitches. He had only gone more than 99 pitches twice this year, topping out at 104. Keep in mind that he’s returning from Tommy John surgery.

**The Pirates had a one run lead, and they turned to Mark Melancon, who entered the game with a 1.07 ERA.

That’s the right move, no matter the outcome. Anyone second guessing the decision to put Melancon in is operating with 100% hindsight. There are a lot of pitching moves where it’s fair to criticize Clint Hurdle, and I often make those criticisms, but putting one of the best relievers in the league in to close out a one run game for a pitcher who is pretty much at his season high in pitch counts and coming off Tommy John surgery? That’s a no brainer.

I’m not going to discuss the second guessing any more than that. What I am going to discuss is the idea that Melancon has struggled lately. I got a surprising amount of comments alluding to the fact that Melancon hasn’t had it as the closer, and that every appearance has been a nail biter. All it took was a quick look at his game logs to see that he’s coming off two straight 1-2-3 inning saves. But let’s dig a little deeper, looking at all of his save opportunities over the last month.

September 18th: Melancon entered with a one run lead. He gave up a first pitch single on the outside edge that Jed Gyorko took the other way. After two outs, he started giving up singles. He gave up an opposite field single to Chris Denorfia on the first pitch. Then Logan Forsythe went downstairs and sent a pitch opposite field that was located in the following location: 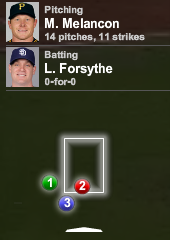 That’s not on Melancon. That’s just good hitting, and it tied the game. Rene Rivera gave the Padres the lead on another single on an outside pitch taken the opposite way. This time it was a golf wedge shot down the first base line.

September 15th: Melancon came on to close out a one run game. He retired the side in order.

September 14th: Melancon closed out a one run lead with three outs. The only eventful moment here was that he struck out the second batter, allowed that batter to reach on a wild pitch, then got a double play to end the game.

September 12th: He had a two run lead. He struck out the leadoff batter, but that batter reached on a wild pitch. A single to center put runners on first and second with no outs. Melancon was bailed out with a bunt popped foul by Donnie Murphy. He then got two outs to end it. He got four outs in the inning, but it was only eventful because of the wild pitch (which happened again two nights later).

September 10th: This is the moment everyone remembers. Melancon came in with a three run lead. He struck out the first two batters, then gave up four straight singles and two runs before getting his third strikeout of the inning.

September 9th: Melancon got two quick groundouts, followed by a single, then a first pitch ground out to close out the one run game. He needed eight pitches to get through the Rangers 2-3-4 part of the order.

September 3rd: With a one run lead, Melancon got two quick ground outs, then gave up a double to Scooter Gennett. He struck out his next batter to end the game.

September 2nd: He had a three run lead, struck out the first two batters, gave up a two out single, then got a ground out to end the game.

August 23rd: A two run lead where Melancon only gave up a one out infield single.

August 19th: Melancon had a three run lead. He gave up a one out single, got a strikeout for out number two, then let a run score on a double. A wild pitch put the runner at third, but he struck out the final batter for the save.

Melancon did have one non-save situation in this time period. That came on August 30th when he entered with a five run lead, gave up two hits, and didn’t allow a run to close out the game.

Looking over these appearances, Melancon didn’t exactly struggle. He had a bad outing against Texas, but got away with the win. He only struggled against the Cubs two nights later because of a wild pitch, which was more of a passed ball on a slider in the dirt that five holed Russell Martin. Then there was last night, where Melancon just had a bad outing fueled by good opposite field hitting by the Padres.

The important thing here is perspective. Mark Melancon is only struggling by the standards Mark Melancon has set this season. For most of the year we’ve gotten used to Melancon being automatic. Up until that game against Texas, he had an ERA under 1. The only other significant stretch where his ERA was over 1 for a long period was in early-to-mid June, following one run in 0.1 innings against the Braves.

The mistake people make with relievers is that they tend to put too much weight on extremely small sample sizes. Outside of tonight and the bad game against the Rangers, Melancon has been the best reliever in baseball. Even with those outings, he’s still one of the top relievers in baseball. And that’s the perspective that needs to be taken with Melancon. He has pitched like one of the best relievers in the game this year. So when he has a bad outing or two it isn’t a sign that he’s struggling. It’s a sign that he’s human, and that he’s going to actually give up runs and hits every so often.

The problem is that it’s easy to remember those few outings where Melancon gives up runs. It’s harder to remember the many outings where he comes in, gets three quick outs with ten pitches or less, and closes out a win. That only leads to situations where you think Melancon has been unreliable because of two bad outings recently, only forgetting all of the other recent outings where he has been one of the best relievers in the game.