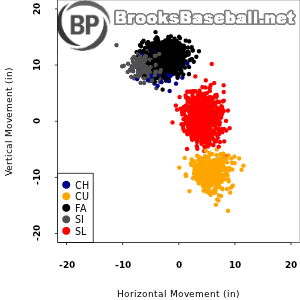 Hanson has an over-the-top delivery, and his arm sort of pauses as he reaches back prior to release. It almost appears as if he is aiming the baseball. He makes heavy use of his 88-91 MPH fastball and 78-82 MPH slider, going to one of the two pitches on more than 80% of his offerings. He mostly works on the outer half of the plate with the two pitches, frequently using backdoor sliders on the outside corner against left-handed batters. He also throws a big-breaking 12 to 6 curve in the 70-73 MPH range. Hanson’s big swing-and-miss pitch is the curveball, with a whiff rate around 40% in 2012. His velocity has been trending downward the past few years. In 2010, his fastball regularly got up over 95 MPH. Last year, he was mostly 89-93 MPH. This year, he has been in the 88-91 MPH range and is struggling to miss bats with the heater. Regardless, he is still striking out a very solid 21.2% of opposing hitters.