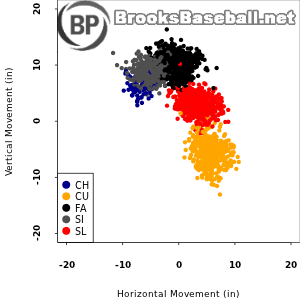 Gallardo’s four-seam fastball is a fairly straight pitch that sits at 91-93 MPH and tops out around 94. His two-seamer comes in at a similar velocity with solid arm-side movement. The two-seamer is probably the better pitch, as it leads to more swings-and-misses and ground balls. However, Gallardo uses the four-seamer much more frequently, possibly because it is easier to command. He throws two breaking balls, an 85-89 MPH slider and a 78-82 MPH curve. The curve is his best pitch, with hard 12-to-6 break and a whiff rate sitting around 37% in 2012. His command of the pitch can be a bit inconsistent, as he occasionally leaves it up in the zone (or above the zone). But when he is able to bury it below the knees, it is an excellent strikeout pitch. The slider, which resembles a cutter, does not miss that many bats, but leads to a lot of weak contact. Gallardo also throws an occasional changeup in the mid to upper 80’s, a pitch that tends to catch hitters off guard.