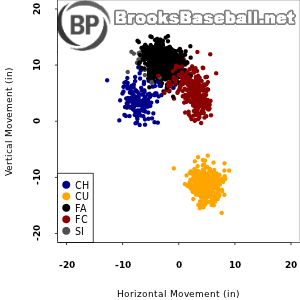 Fiers hides the ball well during his deceptive delivery, making it difficult for opposing hitters to pick up his release point. He mostly throws around 87-90 MPH, maxing out at 91. He throws a decent 80-83 MPH split changeup with some sink, a big, slow 70-73 MPH curve and an 83-87 MPH cutter. Fiers has a reputation of being a control/command guy with mediocre stuff, but he put up some solid strikeout numbers in the minors and has shown little difficulty transitioning to the big leagues. Despite underwhelming velocity, his fastball has missed bats at a slightly above average rate. His curve has also been relatively difficult to put in play early in his career.