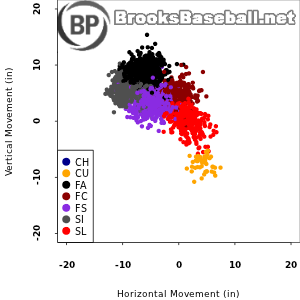 Samardzija has an exceptional fastball, with velocity that sits at 92-97 MPH and occasionally touches 98-99. The pitch misses plenty of bats, and has been particularly effective in 2012. His two-seamer has similar velocity with good movement, and generates a solid number of ground balls. He also mixes in an above average 90-93 MPH cutter, a pitch that has missed bats at around a 25% clip in 2012. Samardzija’s main secondary pitch is an 85-89 MPH splitter, which he uses as an offspeed pitch against both righties and lefties. The pitch is downright nasty, with a whiff rate around 45% in 2012. His primary breaking ball is a hard 82-86 MPH slider, another above average swing-and-miss offering. Samardzija has a deep arsenal and great raw stuff, which is a deadly combination. Right now, probably the only thing keeping him from being a truly elite starting pitcher is his occasional command issues. Samardzija shut down the Pirates on July 23rd, throwing eight shutout innings while allowing just one hit and one walk.