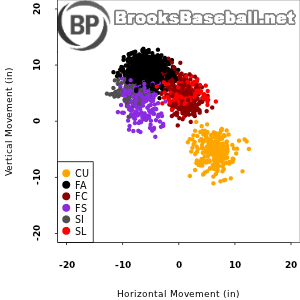 Bailey’s fastball sits around 91-94 MPH and can get up to the 95-96 range on occasion. He throws a cutter or hard slider that sits 85-90 MPH, a pitch (or pitches) he has gone to a bit more frequently the past two years. He also throws a 76-80 MPH curve and an 84-88 MPH splitter. The slider/cutter has been more effective with increased usage, missing more bats in recent years. His curve and splitter have also generated solid whiff rates in 2012. In the past, Bailey leaned heavily on his fastball, throwing it more than 70% of the time. However, beginning in 2011, he began mixing in his secondary offerings more frequently.