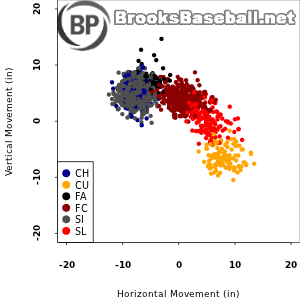 Leake does not have overwhelming stuff, with a fastball that sits 88-91 MPH and occasionally touches 92. He leans heavily on a two-seamer with good sink, which allows him to generate a decent number of ground balls. However, the pitch does not miss many bats and its ground ball rate is far from elite. Leake often uses his 87-90 MPH cutter, which also has good sinking movement. He misses plenty of bats with an above average 79-82 MPH slider, and his 83-84 MPH change is also a relatively difficult pitch to put in play. He rounds out a deep arsenal with an occasional curve in the 77-79 MPH range. Leake’s strikeout rate is down a bit this year, and his overall whiff rate is comfortably below average.