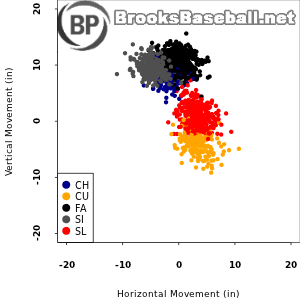 Latos throws over the top and has a big arm, with a 92-94 MPH four-seam fastball that can get as high as 96-97. His two-seamer is just a tick slower, mostly sitting around 92-93 MPH. His big strikeout pitch is an 82-86 MPH slider, which he has historically used about 25% of the time. The pitch misses a ton of bats, with a 2012 whiff rate right around 40%. Latos also throws a 77-80 MPH curveball and an 82-85 MPH change. He missed a lot of bats with the change last season, but the pitch has been far more hittable in 2012. He generally works on the outer half, although he likes to use the slider down and in against left-handed batters. Latos has battled some inconsistencies this season, some of which may be due to his new home. He has allowed 14 home runs in 69.1 innings at Great American Ballpark in 2012, a much higher rate than he has allowed on the road.