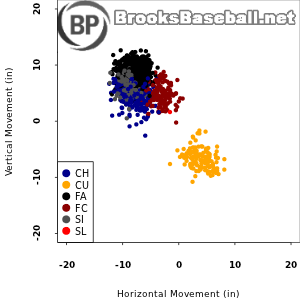 Kennedy makes heavy use of his four-seam fastball, which sits 88-91 MPH and occasionally gets up to the 92-93 range. He does a good job moving the pitch all over the zone, not hesitating to work on the inner half. His velocity has been down just a tick in 2012, but he is missing a lot more bats with the pitch this year. Kennedy’s 79-82 MPH changeup is his out pitch, as hitters come up empty on about a third of all swings at the offering. He actually throws the change just as often to righties as he does to lefties, which is rare for a right-handed pitcher. Righties also swing and miss at the pitch far more frequently. Kennedy’s repertoire is filled out with an 85-88 MPH cutter and a 75-80 MPH curve. He very occasionally works in a sinker as well. He has struck out 21.1% of opposing hitters since joining the Diamondbacks prior to the 2010 season, after struggling to generate punchouts during his time with the Yankees.