A Healthy Clement Ready for Opportunity with Pittsburgh 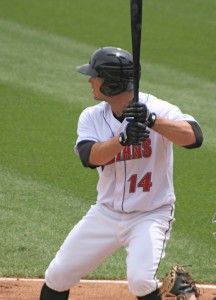 It’s been a long journey back to the big leagues for Jeff Clement. But on Friday, the first baseman was given the opportunity to battle his way back when the Pirates selected him from Triple-A Indianapolis to join the club in Pittsburgh.

Clement, who was Pittsburgh’s Opening Day first baseman in 2010, made his last appearance in a Major League game with the Pirates on August 20, 2010. The first baseman battled injures and underwent season-ending left knee surgery, which forced him to miss most of the 2011 season. Clement played in just 31 games after rehabbing his way back.

“I think about where I was a year ago, just coming off rehab and playing sparingly in Triple-A,” Clement said. “To have a solid year this year, and to be back here it’s everything that I would hope it would be. I’m excited about the opportunity.”

“Progressively better,” he said of his knee. “At the beginning of the season, there was a little bit more pain involved. As the season has gone on, it’s been a lot better. This is the best its felt at this point.”

The health was a big concern for this season. Clement has had several knee issues since the Pirates acquired him from Seattle in 2009. But his impressive numbers at Triple-A kept him in conversation.

“We’ve had a number of conversations about him,” Manager Clint Hurdle said. “When the right time, the right fit would be. He’ll give us an option at first base as well. We’ve got personnel there, but if there’s a day when we just want to try and bullrush a right-handed pitcher, we can run [Garrett] Jones out to right, [Travis] Snider to left, then Jeff at first and get after them at that angle. As the season went on, he showed his health was going to be in a good place. And that was a big question as well. The bat continues to play.”

Standing in front of his big league locker, Clement admitted that he was surprised he was called up to the Majors. Less than 24 hours prior, the first baseman clinched playoffs with Triple-A and celebrated with Champagne in the clubhouse. Two days before that, Clement turned 29. So, to say his past several days have been exciting is an understatement.

But Clement’s earned the promotion. He’s hit for a .276/.340/.486 line over 112 games at Triple-A. Clement’s connected for 35 doubles and 16 long balls. Hurdle decided to upgrade his bench on Friday after the club evened out his bullpen and bench when Jordy Mercer returned from paternity leave. The club sent utility infielder Yamaico Navarro to Triple-A.

“We had Navarro filling in just to supplement some versatility on the bench while we were at four men,” Hurdle said. “And now, as we looked to re-calibrate, Jeff has put in the time. The bat has played. We’re looking for a left-handed bat to work with off our bench. We felt he was as good of candidate available.”

“This young man has committed himself for a number of years, fighting back through some adversity, and some things. Number one, we think he can help us, and number two, I just think we’re adding to a lot of different things — the clubhouse chemistry, experience factor, and what I believe is going to be a tough guy to get out when we use him on the ball field.”

Clement attributes his success this season to three key factors and an adjustment that he made after undergoing the surgery.

“It’s one of those things where, you just control what you can,” Clement said. “Show up everyday, play hard and play the best you can and hope it works out in the future. It did work out…Just keeping it really simple. Controlling what you can. For me, it’s preparing well and playing hard and having fun. If you can keep it to those three things, you’re going to have success. That’s the way it was for me most of the year.”

Although Clement has had a rough month of August, where he’s hitting just .169, the first baseman feels his swing has started to feel better recently. Clement hit over .300 in three of his four months prior, before seeing the recent slump.

“I definitely wasn’t swinging it as consistently as well. The balls I was squaring up, just weren’t finding holes. That’s baseball. That happens. It’s a long season and you’ve just got to keep moving forward. My swing was starting to feel a lot better the last few days.