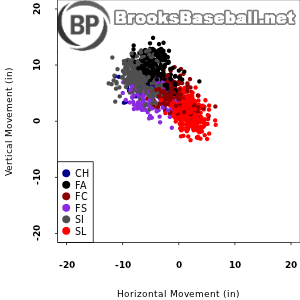 Dempster’s fastball has historically been a pitch that sits 90-92 MPH and occasionally gets into the 93-94 range. However, his velocity has been down a tick this season, mostly sitting 88-90 and touching 92 MPH. He throws a live four-seamer with rising action and a two-seamer with good tailing arm-side movement. His primary breaking ball is an 84-86 MPH slider, and he uses an 81-83 MPH splitter as his off-speed pitch. He also appears to have added an 87-89 MPH cutter this year. Dempster’s best swing-and-miss pitch of 2012 has been the splitter, as it has missed bats at an almost 40% clip this year. His overall whiff rate is down around league average for the second straight season, after he spent several years among the league leaders in the category.